But What Happens If The Apple Watch Doesn't Take Off?
READ THIS NEXT
Maybe your company should hire a Chief Sanity Officer

Last Tuesday, the day Apple launched the Apple Watch -- and assorted other stuff (but mostly the Apple Watch) -- Josh Sternberg tweeted, "so which publication ran the best apple ad today?"

Given that his tweet was only favorited twice and retweeted twice more, I guess a lot of people didn't get the joke. It helps to know that Sternberg, a former media reporter, spearheads the creation of native advertising for marketers at The Washington Post's Brand Studio unit. His title is content strategist.

Basically, the point of Sternberg's tweet was that last week the media busied itself running stories that, for all practical purposes, functioned as ads for the Apple Watch, the iPhone 6, Apple Pay, iOS8, etc. 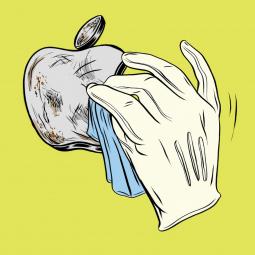 Hundreds -- no, make that thousands, or maybe millions, or gazillions -- of media outlets, large and small, online and off, did what they always do when Apple introduces new stuff: They dutifully lined up to consume, and regurgitate, Apple's multimedia spiel.

Speaking of content strategy, for many years one of the most powerful people at Apple was chief content strategist Katie Cotton -- except her title was actually VP of worldwide communications.

Cotton retired in May after 18 years and still hasn't been formally replaced (though Apple did just hire Marcela Aguilar from Gap to serve as director of global marketing communications, a non-VP position that will presumably annex much of Cotton's old portfolio).

Cotton was a hard-ass, and some people, frankly, don't miss her, though the systems she set in place at Apple -- particularly in regard to the manipulation of the press surrounding product rollouts -- remain mostly welded in place.

As Re/code's Kara Swisher wrote when Cotton announced her retirement, there were some controversial flashpoints surrounding the VP in recent years, like "accusations that she lied during the protracted illness of co-founder and CEO [Steve] Jobs, an issue over which she threw a pretty big cloak in what was an unusual and difficult situation" and "the options backdating scandal, another event where Cotton played very hard."

But the real problem many in the media had with Cotton is that she was brutal about freezing out a lot of journalists and news organizations, while carefully cultivating a short list of favorites who could be counted on to be friendly to Apple. Of course, every PR person plays favorites, but Cotton was a particularly merciless player. (Swisher acknowledges that she was on Cotton's good side.)

Over the summer, the media has been picking apart Cotton's legacy while playing a high-stakes guessing game about her replacement. (Former White House press secretary Jay Carney, who just joined CNN as a commentator last week, was said to be in the running to replace Cotton. That should give you a sense of the aura and pretentions surrounding Cotton's position in the Kremlin -- er, Cupertino -- hierarchy.)

Most notably, 9to5Mac.com ran a lengthy, nine-part feature by Mark Gurman titled "Seeing Through the Illusion: Understanding Apple's Mastery of the Media," complete with chapters titled "Strategies: The 'Art of Deep Background' and Controlling the Press" and "The Departure of a 'Tyrant'" (guess who!).

"With Steve Jobs no longer around and a somewhat gentler Tim Cook in charge," Gurman wrote, "the fear that Cotton instilled within her own organization no longer worked. Current and former employees told us that the only surprising thing about Cotton's departure is that it took nearly three years after Jobs died."

Cook does indeed seem to be "gentler" than Steve Jobs, but you also get the sense that he's more of a pragmatist, too.

Steve Jobs was a god who lived in a bubble of his own making. Tim Cook is a mortal who has endured trials by fire -- from the Apple Maps fiasco to the iCloud celebrity-nude hacking scandal -- that showed that top-down control of the modern media ecosystem isn't as cut-and-dried as it was when Katie Cotton first took control of PR at Apple.

The truth is, the secret sauce in Cotton's recipe for success wasn't her own concoction -- it was the success of Apple overall as an engineering and lifestyle company.

It's a lot easier to be the tyrant with the clipboard at the media VIP lounge if there's something inside that everybody craves.

The real test of the post-Cotton era comes in 2015 when the Apple Watch hits stores. If it's not a runaway hit out of the gate, then Apple will need a lot more real friends -- real loyalists -- among the media than Cotton ever allowed.

Because the thing is, all of those media people who write glowingly about Apple -- all of those content strategists working pro bono for Apple -- are actually fair-weather friends.

And many of them, left to stand outside the velvet ropes all these years, are secretly bitter about Apple.