Once Upon a Time, the Donald Was Synonymous With the High Life -- Now He's Hawking Beef in a Box
READ THIS NEXT
Maybe your company should hire a Chief Sanity Officer
No joke: The Donald on the cover of the Sharper Image catalog.
Credit: 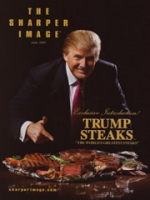 No joke: The Donald on the cover of the Sharper Image catalog.
In case you're distracted by the headline ("Exclusive Introduction! TRUMP STEAKS TM: THE WORLD'S GREATEST STEAKS"), or perhaps by the Hair, Donald Trump thoughtfully redirects your attention to the merch. Grinning wildly, he's pointing right at his signature cow parts -- "the best-tasting, most-flavorful beef you've ever had," he tells us in a full-page letter inside. "Believe me: I understand steaks," he adds. "It's my favorite food. And Trump SteaksTM are the best." (Don't miss the "exciting" message from Trump -- a little cheesetastic infomercial -- at sharperimage.com/trumpsteaks. "When it comes to great steaks, I've just raised the stakes.")

Even better, the steaks are "individually sealed, flash frozen, carefully packed in dry ice and shipped to you in a distinctive black-and-gold Trump SteaksTM presentation box." Which makes them the most ridiculous things to come in a "presentation box" since -- speaking of "Saturday Night Live" -- Andy Samberg and Justin Timberlake introduced the "D--- in a Box."

There's something painfully sad about the timing here. Donald Trump garishly reasserting his brand-ness just as his "Apprentice" gets knocked off NBC's fall schedule? Oy. Stick a fork in it already, Donald.

For the record, the network hasn't officially canceled his show, but it's certainly unhappy that it continued to dwindle in the ratings last season (with an average of 7.5 million viewers, down from the first season's 21 mil). Trump, seeking to pre-empt a "You're fired!" directed at him, announced he was "moving on from 'The Apprentice' to a major new TV venture." Um, can't wait.

Last week, billionaire Mavericks owner Mark Cuban (who wisely noted that he's got a failed reality show of his own on his r?sum?), posted a bit of career advice to Trump on his blog: "You can go to VH1 and ask to be on the celebrity fitness show." Or, he suggested, "You can travel the world over and give speeches on brand dilution. Explaining how a brand that was once synonymous with the finest real estate in the world is now synonymous with a canceled TV show, water, steaks, a doll, vodka ..."

Cuban was echoing something Al Ries stated about The Donald in Advertising Age back in 2004 in regard to Trump making a classic "line extension mistake [of] dividing his loyal customers into thirds" when he slapped his name on three different Atlantic City casinos. "Why are the dangers of line extension so hard to understand?" Ries asked. "You can't stand for something if you put your name on everything."

Trump's Meat in a Box is, at least, an improvement over some of his other line extensions -- particularly Trump Vodka, given that Trump is a complete teetotaler. The larger issue here, though, may not be that Donald Trump is diluting his brand, but that he's exposing his true brand values -- his personal values -- and they're increasingly discordant with the culture. Whereas Trump, at one time, could occasionally appear to be almost statesmanlike -- remember his rescue of New York City's historic Wollman Rink in Central Park? -- now he's all about his red-meat Alpha Maleness. He understands steaks! And, apparently, he hates a lot of iconic females! (Seriously, "hate" isn't too strong a word to characterize the tabloid-ready vitriol Trump has spewed toward Barbara Walters, Martha Stewart and especially Rosie O'Donnell in the past year or so.)

Overexposure as a business strategy has arguably worked brilliantly for Donald Trump all these years. The real problem with his current overexposure is that we're liking what we see less and less.