An immodest proposition: If we're going to keep talking about Stormy Daniels—and it certainly seems like another stiletto will drop at some point—we should try to better understand why her branding and brand messaging have been so successful.

Daniels, whose offstage name is Stephanie Clifford, seems well on her way to becoming to Donald Trump what Monica Lewinsky was to Bill Clinton—an indelible part of the narrative surrounding his administration. A lot of that has to do with the masterly media and marketing game she's been playing, pivoting from niche entertainer to unlikely global household name in a sort of product launch (or product relaunch) of blockbuster proportions.

Here's how she's been doing it:

1. Have a catchy brand name

"We don't know much about politics, but we do know a dirty cocktail when we see one. Introducing the Stormy Daniels, $9 all weekend long."

Vaguely suggestive without being unprintable, it also has, for her heartland fans, a spot-on backstory: The first part was inspired by her love for Mötley Crüe—bassist Nikki Sixx has a daughter named Stormy—and the second was inspired by whiskey. "I picked Daniels from Jack Daniels after I saw an advertisement saying 'a Southern favorite,' " she told the HotMovies blog (which covers exactly what you think it does) back in 2008.

Plus, it's conveniently given lazy journalists ready-made headlines like:

"Trump Forecast: Stormy With a Chance of Mueller" 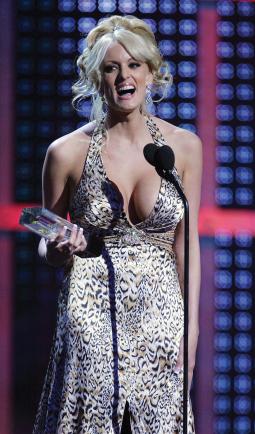 Daniels accepts an award during the Adult Video News Awards Show in 2008.

When Trump and Daniels met for the first time, at the July 2006 American Century Celebrity Golf Championship in Stateline, Nevada, she was already porn-famous enough that the previous year she had a bit part in the 2005 Judd Apatow comedy "The 40-Year-Old Virgin" (as a fantasy character). Apatow asked her back for 2007's "Knocked Up" to portray a Vegas stripper. 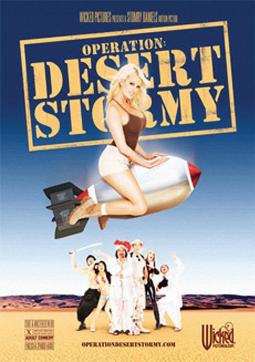 Here's a key part of Daniels' apparent media mastery: She's a performer turned auteur. She has a director's ability to see the world through a lens, to see a narrative as a framed scene—to see it as viewers will see it.

The Internet Adult Film Directory, the adult industry's version of IMDb, cites her as the director of 91 films, including 2007's "Operation: Desert Stormy" and 2017's "Scandalous." She has frequently appeared in the films she directs.

Rodgers wrote that "as a director, she has ambitions beyond the usual vignettes of seemingly random strangers banging each other in half-furnished condos. Her films have character, dialogue, plot, and setting." They include a three-hour-long western, "Wanted," in 2015, which Wicked Pictures hyped as an "epic saga set in 1879 in Diablo City, Arizona—a hard town full of hard people." Rodgers noted that the flick included a "smutty sheriff" and "hooker with a heart of gold."

Think of the Daniels-versus-Trump legal battle as, so far, a three-month-long epic saga set in 2018 in, partly, Washington, D.C.—a hard town full of hard people (and a smutty sheriff, so to speak). It's another Stormy Daniels production—while an unscripted, unfiltered reality-TV star squirms in the White House as his legal team fumbles.

That's how CNN Senior Media Correspondent Brian Stelter summed up Daniels lawyer Michael Avenatti's uncanny ability to keep his client's narrative in the news with an incremental reveal of additional aspects of the drama.

But it only works as a press strategy until people feel they're being played. Here's Stelter, one day after his "drip" observation: "Is there a brewing backlash against Avenatti's almost too savvy tactics?"

Daniels and Avenatti have built their media phenomenon based on the slow reveal, but eventually they need to deliver what they've been slyly promising.

This has become an endless source of amusement for the media. Per The Daily Beast: "Stormy Daniels absolutely slays Trump trolls on Twitter." Per The Washington Post: "For Stormy Daniels, swatting away Twitter trolls is a work of art." The Post cites, among other responses, this one to a hater who called her a "scanc": "The correct spelling is 'skank'... at least according to my business card."

As of this writing, her most recent response to a hater was to one who wrote on Twitter: "@StormyDaniels Hi are you the American whore who wont keep your legs shut or your mouth." "Yes, I am," she tweeted. "Nice to meet ya!"

If "a picture is worth a thousand words," how many words is this worth?????#60minutes #pleasedenyit #basta pic.twitter.com/eCkU0JBZaR

Daniels' unapologetic approach has made her the ideal opponent for (notoriously unapologetic) Trump himself, many have noted. But she's also entirely unlike Trump in that she knows how to pick her battles—and knows which weapons to deploy at the right time.

While the president attacks 99 percent of his opponents by mercilessly strafing them in speeches, sound bites and tweets (and has a one-size-fits-all approach to firebombing Democrats, disobedient Republicans, Gold Star families, war heroes, etc.), Daniels fends off her online critics with self-deprecating humor, and has made a point of refraining from saying anything bad about the president himself—which has probably kept him from retaliating and going after her personally. (History tells us that Trump finds it impossible to bite his tongue—or keep his thumbs still—when criticized.)

Any negative messaging that's come out of the Daniels campaign (let's just call it that for a moment, for the sake of argument) has come courtesy of her campaign manager (er, lawyer) Avenatti. And Avenatti has mostly devoted his time not to attacking Trump, but to mocking the already widely mocked Team Trump legal strategy regarding Daniels, especially the actions of Trump attorney Cohen and his hush money.

Cohen has essentially said that Daniels is lying, which prompted Daniels to file a defamation suit against him this week. But in mid-March, he filed a claim in federal court maintaining that because Daniels violated her NDA, he'll seek at least $20 million from her—$1 million per (unspecified) breach. So ... she's making it all up and she's revealing confidential, factual things about her relationship with Trump that she's not supposed to be revealing? What?

Those who say that Daniels is a worthy opponent for Trump miss the fact that she's not actually treating him like an opponent. She's only directly going after those who attack her credibility—and even then, she leaves the street-fighting to Avenatti as she maintains her (relatively) respectable position above it all. In other words, she outclasses the president.

As Daniels tells it, part of her connection with Trump had to do with the fact that she called him out on his narcissism and self-regard, teasingly spanking him with a copy of Trump magazine because he wouldn't stop talking about himself. He was a bad boy, she mock-punished him for it and he appreciated the discipline.

Let's return for a moment to Life Before Trump—and specifically to that 10-year-old HotMovies interview with Daniels. Among the safe-for-work passages is this wry exchange that closes out the brief Q&A:

Q: Will you respect me in the morning?
A: Absolutely not.

That sense of humor, that sort of sensibility—the seductress who grasps the absurd subtexts of human desire, lust, neediness—might just be the most important hallmark of the Stormy Daniels persona and brand.