Some Things Twitter Told Us, Indirectly, Because It Had to Tell the SEC; Other Things It's Been Saying Between The Lines
READ THIS NEXT
Maybe your company should hire a Chief Sanity Officer

Twitter is finally set to go public this week -- but even if you have no interest in investing in the company, the whole run-up to its IPO has been incredibly illuminating. We've learned a lot about Twitter not only because of things it's had to tell us (in documents filed with the government) but what it's been telling us about its business sort of between the lines, by its (somewhat frenzied) actions in the weeks and months leading up to the big day. Among the key takeaways: 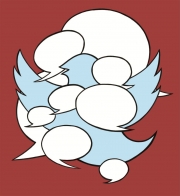 Twitter is niche-ier than we thought it was
One of the most buzzed-about revelations in Twitter's S-1 filings to the Securities and Exchange Commission last month was that it's not as widely used as its (obnoxious) ubiquity in the media might suggest. Its updated S-1 filing in mid-October revealed that it has more than 230 million MAUs -- monthly active users -- which represents growth of about 5.5% over the previous quarter, which continues the trend of a recently slowing growth rate for Twitter. And most MAUs are actually outside the United States -- roughly three-quarters -- which is a problem, because non-U.S. users are harder to monetize.

That's exactly why last Tuesday, Twitter, on its official blog, published a post titled "Picture this: More visual tweets," which read, in part, "Starting today, timelines on Twitter will be more visual and more engaging: Previews of Twitter photos and videos from Vine will be front and center in tweets. To see more of the photo or play the video, just tap."

As my colleague Cotton Delo reported the same day, the announcement had "big implications for marketers … who can now essentially publish large display ads and show them to users in their own streams." And, she added, "if the move makes Twitter ads more desirable, it will drive bidding prices up and yield more ad revenue for Twitter."

Twitter is locked in a social-TV grudge match with Facebook
Over the past several years, if you're a regular reader of AdAge.com, you've probably noticed some of the hundreds of posts I've published about the so-called social-TV space -- the intersection between social media and TV. A good chunk of those posts used data from social-media-analytics companies Bluefin Labs and Trendrr, with which I struck up editorial partnerships. Both were independents that were trying to become the Nielsen, the measurement gold-standard, of social media -- social TV in particular. In early February, Twitter bought Bluefin, and then in late August, it bought Trendrr.

Why? Because it legitimately wanted/needed their tweet-parsing technology, but also, in the case of Trendrr particularly, to keep Facebook from buying it.

You see, in July, Trendrr released a study saying that Facebook has five times as much chatter about TV than Twitter. I personally thought it was a sort of apples-and-orange comparison (what counts as meaningful, measurable user "activity" on the two services is markedly different, plus Twitter's open ecosystem makes it much easier to surface and engage with its TV chatter), but no matter.

By buying Bluefin and Trendrr, Twitter has effectively shut them up -- neither company (since they've been absorbed into Twitter) can directly share data with me (and by extension, you, dear reader) anymore; their IP and insights are now used to help sell Twitter as the superior social-TV platform. Good for Twitter; bad for not only Facebook, but anybody who'd hoped that the robust independent social-analytics sector would continue to flourish.

Twitter needs some new schtick, quick
Why do people who like Twitter use Twitter? Ask the average user, and they'll likely mention the obvious: to follow celebrities, to tweet about TV, to find out about breaking news and … what else is there? If you're allergic to Kim Kardashian et al., if you're not all that keen about fiddling with your mobile phone while watching "Duck Dynasty" and if you're not a news junkie … then why be on Twitter?

To circle back to my earlier point that Twitter needs to get better at media, not just meta-media, it's increasingly obvious that the service is gearing up to introduce some new value propositions in the form of Twitter-produced media (think of what YouTube has done with its channel partners). That will make it a destination in and of itself (I think the "Picture this: More visual tweets" announcement is just the tip of the iceberg), as opposed to just a pit stop (or a guide) on the way to other media destinations.

And I think some of that new drawing power might actually come through rich-media advertising -- the sort Cotton alluded to, and which has the potential to be especially relevant given Twitter's mobile-centric interface.

If a critical mass of people can be persuaded to start thinking that, say, "Twitter helps me save money when I go to the grocery store," that's a whole new audience -- and a whole new ballgame -- right there.