From Adblock and Big Data to Hyperlocal and TV Everywhere, Media Guy Is Here to Explain
READ THIS NEXT
Maybe your company should hire a Chief Sanity Officer

Confused by all the buzzwords floating around in the digital economy? Media Guy is here to help.

Adblock -- n. A service that kidnaps your kittens, puts them in a sack and then drowns them in the river -- unless you pay Adblock to "whitelist" your kittens, in which case they will be allowed to live. Wait, did I say kittens? I meant your online ads. 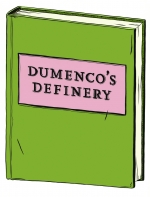 BuzzFeed -- n. The media version of a Pez dispenser. Also, a way to monetize Reddit.

Gamify -- v. To amuse yourself while other people are being totally boring. Usage: Sen. McCain gamified the hearing on Syria by playing poker on his iPhone.

Google Glass -- n. Electronic headgear that allows the NSA to directly monitor everything you do, without having to rely on the usual middleware (email, phone calls, social media).

Hyperlocal -- n. A business theory that maintains that if you make your way to the end of a rainbow, you'll find a small community of leprechauns underserved by traditional mass media. All it takes to get them to hand over their pot of gold is to a) create specialized, engaging editorial content tailored not just to leprechauns in general but to this particular community of leprechauns, and b) determine which of the leprechauns is a small-business owner, and then sell him overpriced banner ads that none of the other leprechauns will click on.

Hyperloco -- adj. To be so rattled by the challenges of the hyperlocal marketplace that you do something very rash and very public. Usage: The boss went hyperloco and fired Bob at the breakfast meeting for Instagramming his danish.

Mobile -- adj. Slipped away. Usage: We used to have pretty decent revenue, but then all our traffic went mobile.

Native advertising -- n. A kitten that pretends not to be a kitten so Adblock doesn't drown it in a river. (See Adblock, above.)

Real-time advertising -- n. Topical ads seen by the media on Twitter but by no actual consumers. Usage: Thanks to incredibly effective real-time advertising, the TechCrunch writer decided to serve Oreos instead of pizza at his next Super Bowl party and/or royal birth!

Reddit -- n. A site that serves as a crib sheet for bloggers and the mainstream media. Usage: Bob had page-view quotas to meet and had run out of ideas for posts, so he went on Reddit and rewrote a few things he found on its home page.

Tumblr -- n. A source of free pornography recently acquired by a logo-redesign shop.

TV Everywhere -- n. A religious doctrine that maintains that, like Scientology or Starbucks, TV is simply not ubiquitous enough yet -- but it's only a matter of time.

Vine -- n. A brief video tailor-made for people whose attention spans are so short their minds start to wander halfway through a tweet.

Yelp -- n. An anguished cry, similar to a Wilhelm Scream, emitted by a local retailer who is being mysteriously bullied by anonymous online reviewers.