Is the Future of TV Oprah's OWN? Streaming Netflix? Your IPad? | Ad Age
Skip to main content
Sign In Register

Is the Future of TV Oprah's OWN? Streaming Netflix? Your IPad?

The TV industry has been undergoing epic transformation for years now, but a number of new seismic shifts has everyone trying to figure it all out again lately. 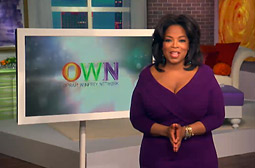 One much-hyped big shift, of course, is Oprah Winfrey's embrace of cable with the launch of her Oprah Winfrey Network, or OWN, on Jan. 1.

A more gradual -- but still rapid -- shift has been the transformation of Netflix from a primarily DVD-by-mail service to one of the biggest streaming-video services on the planet.

And with the launch of the annual Consumer Electronics Show in Las Vegas, kicking off today with a "preshow keynote" from Microsoft CEO Steve Ballmer, expect nonstop news coverage about the next generation of iPad-wannabe tablets, all of which are further expanding the idea of television as something that streams wirelessly wherever and whenever you want it. Just this morning Comcast said it plans to offer live TV streaming on tablets this year.

So for this week's Trendrr charticle -- a collaboration between Advertising Age and social-media tracking service Trendrr -- we decided to parse the conversation surrounding Oprah, Netflix, C.E.S. and the iPad on Twitter. Who cares about what? Read on.