What Happens Next in Media? 9 Predictions | Ad Age
Skip to main content

What Happens Next in Media? 9 Predictions 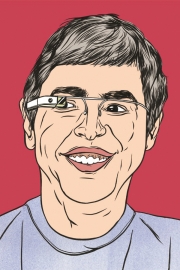 2. In the wake of President Obama's joke at the recent White House Correspondents' Dinner about the rise of BuzzFeed as a media phenomenon -- "I remember when BuzzFeed was just something I did in college around 2 a.m." -- congressional Republicans will launch a formal investigation into exactly what post-toke munchies Obama consumed at Columbia and Harvard (chips? candy bars? day-old pizza?) in an attempt to get him in trouble with first lady Michelle Obama, who is famously an advocate for a healthful diet.

3. Furthermore, when word gets out that the president also frequents HuffPo, conspiracy theorists will launch countless websites and forums to get to the bottom of Obama's HuffPo use. (It will quickly become widely known that "po" is some sort of powdered opiate favored by Muslim Kenyans, and that the president is addicted to huffing it.)

4. In the wake of a Reader's Digest poll showing that just 41% of Americans trust Matt Lauer, NBC will decide to reboot the "Today" show franchise by coming clean about its real purpose: promoting the network's prime-time programming. "Today" will dispense with any pretense of being a news program and will instead become an all-morning infomercial for "The Voice," with Adam Levine, Blake Shelton, Shakira and Usher replacing Lauer and Savannah Guthrie as co-hosts. (To run out his contract, Lauer, in what NBC spins as a promotion, will replace Carson Daly on "The Voice.")

5. Speaking of NBC, the network will announce its biggest prime-time product-placement deal ever. Pizza Hut's new Crazy Cheesy Crust Pizza, which promises "an explosion of flavor at every bite" thanks to its 16 pockets of cheese around the crust, will replace Gary Busey on the next "Celebrity Apprentice" all-star season. When the bubbly, charming Crazy Cheesy Crust Pizza fails at its assigned task six episodes in, it will be ritually consumed by the remaining contestants immediately after it's fired. Thanks to a ratings explosion and overwhelming social-media response (#eatthefired trends on Twitter), in the next episode Stephen Baldwin is cannibalized by Donald Trump right after he fires him.

6. Big Oil billionaires David and Charles Koch top the other bidders -- nobody, no one and not a soul -- for the Tribune Co. newspapers in order to advance their hyper-conservative, anti-government agenda. By controlling the op-ed pages of the Chicago Tribune, Los Angeles Times, etc., they successfully seduce lawmakers in Illinois, California and beyond, resulting in the elimination of all government regulations pertaining to newspaper publishers. The Kochs then create a path to profitability for the Tribune papers by firing all unionized reporters and replacing them with sub-minimum-wage child labor. Nine-year-old Tribune White House Correspondent Chauncey Wheaton becomes the toast of D.C.

7. Brushing aside privacy concerns, Foursquare co-founder Dennis Crowley declared last week that automatic check-ins -- the Foursquare app recording a user's arrival at various locations without the user having to proactively do anything -- may just be "the natural progression of things." Crowley ultimately proves right, and Foursquare preemptively locks down the youth market by offering fetuses auto check-in to their mothers' wombs. Following the success of that program, Foursquare creates a check-in program for sperm ("Foursquare helps you and your friends find great eggs and make the most of your visit").

8. In the wake of the February ouster of its co-founder and CEO Andrew Mason, last week Groupon said that it was entering a "new chapter" in which it is rethinking the way it promotes its offerings, as consumer interest in the daily-deals market wanes. Taking a page from Foursquare and Facebook, Groupon will announce that the next-generation Groupon will offer "totally natural" and "frictionless" shopping, wherein your credit card will automatically be charged for 80%-off bikini-line laser-hair-removal and half-off tapas whenever Groupon's new "intuitive algorithm" parses your social-media posts and concludes that you're hungry and a little too hairy down there.

9. Media critic Howard Kurtz will shock the media world (and redeem himself for screwing up his coverage of the Jason Collins story) by coming out as a proud gay black man.