News Corp. Over the Weekend: 'ALL HELL BREAKS LOOSE' 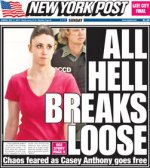 While News Corp. publications around the world continue to downplay the media conglomerate's "Hackgate," the scandal just continues to unfold -- and astound. To quickly review: On Friday, as my colleague Nat Ives reported, Brooks -- the CEO of News Corp.'s British newspapers division who had been editor at the now-shuttered British tabloid News of the World during much of the phone hacking that has enraged Britain -- resigned. Later in the day, Dow Jones CEO and Wall Street Journal publisher Les Hinton, who'd worked for Murdoch more than 50 years starting when he was 15, also called it quits. (Like Brooks, Hinton had served as CEO of News International, News Corp.'s British newspapers division; his tenure ran 1997 to 2005.)

On Sunday, Brooks was arrested. And then later in the day, Britain's top cop, U.K. Metropolitan Police Chief Paul Stephenson -- under fire given accusations that Scotland Yard may have been involved in aiding and abetting News of the World's phone-hacking crimes -- also quit.

Trouble keeping score? Can't blame you; so am I. To help bring you up to speed on the scandal in its current metastasized state, here's some essential reading from over the past few days and today:

Why the timing of Brooks' arrest seems awfully suspicious

Conveniently, Rebekah Brooks has been arrested...: The Spectator's Alex Massie points out that Brooks may be able to avoid answering questions when she has to appear before a parliamentary committee tomorrow precisely because of her arrest on Sunday.

The Journal Becomes Fox-ified: In a scathing column, The New York Times' Joe Nocera rips Murdoch's Wall Street Journal for last week's toothless interview with the mogul and says the paper has now shown itself willing to be a "shill for his business interests."

Rupert Murdoch's empire must be dismantled -- Ed Miliband: The Labour leader tells the Guardian that News Corp. has "too much power over British public life."

Elisabeth Murdoch comes to fore as family argue over phone-hacking crisis: The Guardian thinks James Murdoch is sinking while his sister Elisabeth is rising in the Murdoch family hierarchy.

Rupert gets ready for his big day

Team Murdoch: The men coaching Rupert for his date with MPs: The Independent reports that a "strategic consultant" who coached David Letterman in the wake of his office-affairs scandal is now prepping Rupert Murdoch for his grilling by members of parliament.

"Eavesdropping on voicemail... was initially a money-saving measure"

Inside Rebekah Brooks's News of the World: a fantastically dishy "special report" from Reuters' Georgina Prodhan and Kate Holton.

How Will Citizen Murdoch's U.S. Empire Fare in Scandal's Wake?: my colleague Nat Ives' analysis of the fate of the Wall Street Journal, the New York Post and Fox News.