Should the Obama Administration Execute David Sirota by Drone Strike?

'Do Kill' or 'Do Not Kill,' That Is the Question
READ THIS NEXT
Maybe your company should hire a Chief Sanity Officer

When you've been a media columnist as long as I have, you realize that cycles of media outrage about government wrongdoing inevitably begin to resemble the movie "Groundhog Day," but without the happy ending. 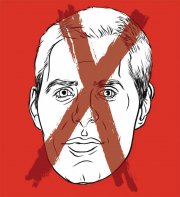 David Sirota
Consider one of the media obsessions of the moment: the Obama administration's ongoing Kafkaesque/Orwellian drone wars. Last week, NBC News published what it called "a confidential Department of Justice memo that hints at the details of a secret White House memo that explains the legal justifications for targeted drone strikes that kill Americans without trial in the name of national security." Got all that? (Translation: The government wrote a fancy note to itself to justify doing obscenely unconstitutional stuff.)

The leak of the memo -- aka "the white paper" -- set the stage for last Thursday's Senate confirmation hearing for John Brennan, President Barack Obama's nominee for CIA director. Brennan, it turns out, is Dr. Drone. As The New York Times put it, "From his basement office in the White House, Mr. Brennan has served as the principal coordinator of a "kill list" of Qaeda operatives marked for death."

Except that sort of oversimplifies things because we know that the targets of Dr. Drone's missiles haven't always been al-Qaeda members -- nor have they necessarily been on the formal kill list. For instance, Abdulrahman al-Awlaki. As Tom Junod reported in Esquire, he was a 16-year-old boy born in Denver who had the misfortune of having a father, Anwar al-Awlaki, who was on the kill list for being an al-Qaeda propagandist notorious for posting inflammatory videos on YouTube. The father was snuffed out by a CIA drone strike in Yemen in September 2011.

Two weeks later, also in Yemen, his son was killed by a drone strike, too. He was an American citizen, a minor, had never been charged with a crime, and he was 14 the last time he'd even seen his father. When questioned about the killing last fall, former White House Press Secretary Robert Gibbs famously responded, "I would suggest that you should have a far more responsible father if they are truly concerned about the well-being of their children." (His brain obviously went on strike at the start of that sentence even as his lips continued to move.)

But back to that leaked Department of Justice memo. It insists that targeting people for drone killings doesn't require "clear evidence that a specific attack on U.S. persons and interests will take place in the immediate future." Therefore, the U.S. can summarily execute American citizens if they are thought to have been "recently" involved in (unspecified) terrorist "activities" -- again, without due process.

Talk about your double-black-diamond slippery slopes.

Which brings me to the deja vu, the-more-things-change-the-more-they-stay-the-same feeling I was having all last week. Travel with me back in time to May 2012, when the existence of Obama's kill list was first revealed. Back then I wrote about a provocative petition created by a guy named David Sirota using the Obama administration's "open government" online petition-creation system (a system that's turning out to be basically hokey posturing -- ham-fisted marketing -- and every bit as disingenuous as that recently released White House photo of Obama getting in touch with his inner Vladimir Putin by skeet shooting).

Sirota's 85-word petition, titled "We petition the Obama administration to create a Do Not Kill List," read, "The New York Times reports that President Obama has created an official "kill list' that he uses to personally order the assassination of American citizens. Considering that the government already has a "do not call' list and a "no fly" list, we hereby request that the White House create a "Do Not Kill' list in which American citizens can sign up to avoid being put on the president's "kill list' and therefore avoid being executed without indictment, judge, jury, trial or due process of law."

Sirota's petition, as you might imagine, didn't go anywhere. An author, radio-show host and Salon.com contributor, Sirota has been one of the most outspoken critics of Obama's kill list. In fact, now that I think about it, you might characterize him as an enemy of Obama's kill list. He's U.S.-born (ding), an American citizen (ding) and he's based in Abdulrahman al-Awlaki's hometown of Denver (ding ding ding!).

Furthermore, his "activities" are demonstrably "recent." Last Wednesday evening, Sirota posted a chilling video to YouTube titled "Obama's Kill List and White Paper Memo" in which he speaks to the camera from his cluttered lair.

Oh dear sweet Jesus. I think I may have said too much already.

MEDIA GUY'S GIVEAWAY OF THE WEEK: "Truth in Advertising," the acclaimed debut novel from recovering copywriter John Kenney. The Washington Post's John Wilwol called it a "wry sendup of the advertising industry and corporate culture" and Ad Age's own Ken Wheaton pronounced it "a hilarious, heartfelt take on adland." Want a chance to win one of five free copies? Details here.