The One TV Comedy Millennials Can't Wait to Watch

Spoiler: It Stars a Pig and a Bunch of Other Animals
READ THIS NEXT
Maybe your company should hire a Chief Sanity Officer

Yesterday, we took a look at fall TV's 10 most promising new TV shows -- the ones that are getting Watchlisted the most by TVGuide.com's millions of users. Since that list was drama-heavy (9 out of 10 of the shows), today we're taking a closer look at how the fall's new comedies are stacking up.

Watchlist, as we've noted, is not only a useful service for pop-culture fans (it's a customizable entertainment guide that lets you track your favorite shows, actors, etc.), it's something of a crystal ball. Since 2012, Ad Age has had an informal editorial partnership with TVGuide.com focusing on Watchlist; each season the top 10 most Watchlisted new shows overall have tended to have a high probability (up to 80%) of being picked up for a full season.

That said, today's list is only a top 8 -- because there are only 8 new network comedies this fall. 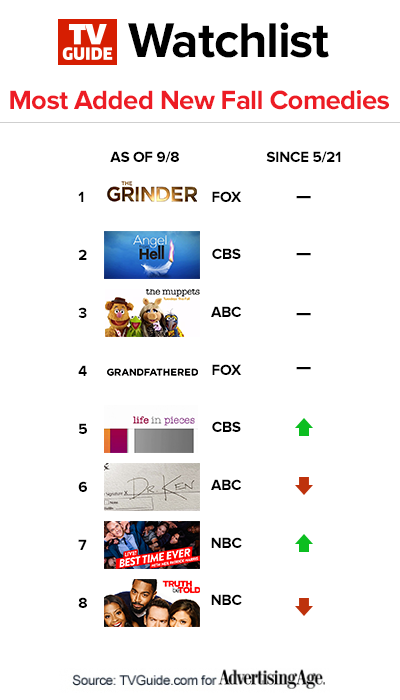 • "Rob Lowe wins the Battle of the Babes, as his show 'The Grinder' beat John Stamos' 'Grandfathered' in our comedy rankings. Buzz on both shows is pretty good, which is great news for Fox, but hilarious supporting work by Fred Savage and William Devane as Lowe's brother and father has given 'The Grinder' an edge." It's worth noting that "The Grinder" is the only comedy that made our all-genre top 10 list (in the No. 9 spot) yesterday; it takes the No. 1 spot when ranked solely against other network comedies.

• "Ken Jeong is a funny guy, as fans of 'Community' and the 'Hangover' movies already know. But his comedy brand is decidedly adult; is he the right choice to anchor a family comedy for ABC's burgeoning slate of diverse sitcoms? It's a definite risk: 'Dr. Ken'" -- the No. 6 comedy on our list -- "could be the next 'Black-ish' ... or the next 'Cristela' (RIP)."

• "The Muppets" -- our No. 3 most wanted comedy -- has something surprising in common with a drama, "Quantico," that was No. 4 on our all-genre list yesterday. "These two ABC shows couldn't be more different," explains O'Connor, "but they are the top-trending shows among the prized millennial demographic." What's fueling interest in the Jim Henson Productions' comedy? Possibly some millennial nostalgia: If you're, say, a 31-year-old today, you were a teenager when "Muppets Tonight" reruns ran on Disney Channel from 1997 to 2000. And don't forget 2011's "The Muppets" and 2014's "Muppets Most Wanted," which together grossed more than a quarter billion dollars in movie theaters worldwide.