Magazines Are Dead, or Why There's No Such Thing as a (Mere) Magazine Company Anymore | Ad Age
Skip to main content

Magazines Are Dead, or Why There's No Such Thing as a (Mere) Magazine Company Anymore

As Ad Age Reveals Its Latest Annual Magazine A-List, Media Guy Ponders What It Really Means to Be a Magazine Circa 2013
READ THIS NEXT
Maybe your company should hire a Chief Sanity Officer

In the Oct. 21 issue of Advertising Age, you'll find the closely watched annual Magazine A-List, which honors 10 glossies that are doing really, really well. I'm part of the editorial team that, each summer and fall, works on the list (which involves a lot of in-depth research and number-crunching) and decides which magazines are "hot." For some reason, contemplating "hotness" this year sent me into something of a my-life-flashing-before-my-eyes-in-glossy-form reverie -- a mix of nostalgia and mourning. 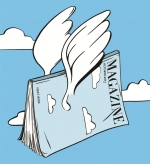 When Ad Age launched the Magazine A-List in its present form in October 2002 (before my time), large parts of the magazine industry were still in a post-9/11 recessionary gloom.

Tina Brown's much-hyped monthly Talk had folded in January after partners Hearst and Miramax got sick of footing its losses. (It had launched just three years earlier under a 20-minute Grucci fireworks show at a lavish bash at the base of the Statue of Liberty in perhaps the definitive fin de siècle party. I remember drinking, uh, enthusiastically as I gawked at the absurd mix of guests, including Madonna, Al Sharpton, Kate Moss, Henry Kissinger and, of course, Kevin Bacon.)

In October 2002, even many well-established, profitable titles had entered a sort of holding pattern, waiting out the uncertainty in the media industry ... and all industries, really (save for the military-industrial complex).

To put things in context: Friendster had just launched in March. MySpace wasn't hot because it didn't exist yet (it would launch in August 2003). Mark Zuckerberg was just a month into his first semester at Harvard (he wouldn't launch Thefacebook -- Facebook 1.0 -- until February 2004). YouTube was three years away from its birth; Twitter, four years.

In 2002, the best-selling cellphone in the world was the stubby Nokia 6100, and Motorola's fashionable, must-have Razr flip-phone wouldn't be born until the following summer. The Apple iPhone was still five years away from its introduction.

The year 2002 did produce one notable magazine launch -- Budget Living -- but it was, of course, emblematic of an era of reduced expectations. And it was the product not of one of the big glossy publishing stalwarts like Hearst or even Meredith, but indie entrepreneur Don Welsh.

In August 2002, Randall Rothenberg, then CMO at Booz Allen Hamilton and an Advertising Age columnist (today, the president-CEO of the Interactive Advertising Bureau), characterized Budget Living as "the rare magazine startup in what may be the worst ad environment since World War II." Welsh's startup would be named Ad Age's launch of the year in 2003 (after its first full year of business), but by 2006 it would run out of steam and cease publication. (Welsh himself would die in a 2010 drowning accident.)

A little later in the decade, of course, a lot of people would end up pining for the mere awfulness of 2006, let alone 2002. The global financial meltdown of 2008 -- aka the worst financial crisis since the Great Depression -- would become the new low-water mark.

Plenty of businesses tanked during the Great Recession, but in the media industry, we still tend to fixate on the magazines that folded. Partly because magazine deaths fit neatly into the "print is dead" orthodoxy -- but, I also think, because many magazines form incredibly passionate bonds with their readers, who can feel lasting grief when their favorites suddenly cease to exist. (Foodies still mourn the October 2009 death of Gourmet, although publisher Condé Nast later revived it as an iPad app.)

Fast forward to present day: The 2013 Magazine A-List is filled with not only success stories, but in a bunch of cases, most-success-ever stories. Revenues at various titles have hit historic highs, prompted in large part by ad-page growth; Hearst's Elle, for instance, just published the fattest-ever issue (the September fall fashion issue) not only in its history, but in Hearst's history.

But what's interesting about all our A-Listers is that they've figured out how to not only continue to make the case for good, old-fashioned glossy print, but how to build thriving digital operations.

In a way, it feels reductive to call them mere magazine companies. We call them "multimedia megabrands" in the introduction to our A-List package. More than that, they're -- holy shit! -- actual growth companies. (As opposed to hope-and-pray-for-profits-one-day growth companies, which are a nickel a dozen in the VC-enabled digital realm.)

What's perhaps most remarkable is not so much the phoenix-from-the-ashes-of-2008/2009 narrative -- because lots of business sectors have also bounced back from those dark days -- but how enduring many of our A-List magazines are. We tend to forget how ephemeral a lot of pure-play digital brands end up being, while overlooking the dynastic strength of iconic glossy brands.

Elle, for instance, is 28 years old (the U.S. edition, that is; the original French edition is 68). Fellow A-Lister New York magazine is 45. Esquire, also on the list, turns 80 this month.

What do you make of that, Friendster, MySpace, et al?