I Blame Twitter for the Fact That I Totally Hate Kittens

Or, What Does Our Digital Discourse These Days Have in Common With Abbott & Costello and Emily Litella?
READ THIS NEXT
Maybe your company should hire a Chief Sanity Officer

"I can't stand kittens," says Joe Duncan, "with their big, stupid eyes, and their spazzy way of walking."

"I'm terrified of rainbows," says Bob Darlington. "I hear that a lot of leprechauns are crystal-meth heads, and they'll try to violently rape you if you get anywhere near their pots of gold." 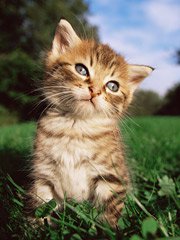 I have little doubt that, sooner or later, some or all of the above statements (from nonexistent people) will end up getting ascribed to me somewhere in cyberspace. "Simon Dumenco hates kittens -- what a psychopath," someone will tweet. "HA HA! Simon Dumenco, that pussy," a commenter will note, "is afraid of leprechauns!" And a rabid Gleek will chime in with, "Is it any surprise that Simon DUMB-enco, the WORST writer in the world, doesn't know BRILLIANT television when he sees it?!" And then it'll snowball from there.

I realized -- or re-realized -- that recently when I saw a string of comments about a piece I wrote (for another publication) on a third-party website that had linked to said piece. One commenter, early on, copied and pasted a controversial quote -- by someone I'd interviewed -- from my story without providing the attribution that I'd provided in my original, and then every commenter thereafter assumed that I'd said it (conspicuously failing to go back and read the actual piece) and proceeded to trash me for having such an awful opinion. Likewise, when I recently interviewed Aaron Hicklin, the editor in chief of Out magazine, for Advertising Age, I made some general observations -- my opinions, not Hicklin's -- in my introduction, and then a commenter got all mad at Hicklin, suggesting that he was condescending and undiplomatic because of what I had stated before our clearly demarcated Q&A even began.

The thing is, I can't really blame these folks. Of course, I could say something condescending and undiplomatic about certain people's lack of reading comprehension, but the truth is, this sort of misattribution and misreading and general derangement of reality is becoming more and more endemic to the way we consume information and communicate -- and think -- now.

Actually, while I'm at it, I blame Facebook, too. And, of course, drive-by-commenter culture. (Note to any thoughtful commenter who may comment on this column: I'm not talking about you! I'm talking about that other guy!)

It used to be that only certain types of hacks -- politicians and celebrities, mostly -- were expected, obligated, to communicate primarily in soundbites. Now tens of millions of us do it as a matter of course; it's become second nature. And we're also expected to always be consuming other people's soundbites, too.

Really, TV sound-bitery now seems like a high art compared to certain itty-bitty brain farts that can gain currency, and real influence, with astonishing speed thanks to the new social media. Consider the fact that a demonstrably clueless political dropout -- the ex-governor of a certain icy, sparsely populated state -- somehow kept her White House prospects alive by issuing 140-character-or-less bursts of nonsense. (Meanwhile, a brief post on her Facebook page about "death panels" was all anybody could talk about for weeks.)

Now, I'm not saying that there aren't awesome things about nanoblogging, micromedia, social media, real-time media, etc.; I'm not ignoring how amazing and galvanizing it was, for instance, when the world found out about Neda's assassination during the Iranian election protests earlier this year thanks to Twitter and Facebook (in combination with YouTube). I'm not a total Luddite.

But I'm telling you, I wanted to cry a couple weeks back when I read this quote in the New York Times from publishing consultant Constance Sayre: "The only thing I worry about is that everybody's writing and nobody's reading." She was commenting about the prospects of Beast Books, a new joint venture between Tina Brown's Daily Beast blog and Perseus Books to publish "timely titles by Daily Beast writers ... on a much shorter schedule than traditional books." Sayre is right, of course.

Millions of people now feel that the onus is on them to spit out a snippet of writing -- a tweet, an update, a blog comment -- as fast as possible (like, right now), before they've even really finished consuming and/or comprehending the piece of information they're writing about. And then other people spit out a snippet in response to those snippets, and pretty soon we're all living in some Bizarro universe where we're constantly debating stuff that's not actually up for debate.

And then filter those new-media-enabled fake debates about non-facts through the prism of the worst of the old media -- particularly cable news channels and talk radio -- and our discourse (the political discourse in particular) becomes a game of telephone crossed with Abbott & Costello's "Who's on First?" routine crossed with an old Emily Litella skit from "Saturday Night Live." (What? Oh. Never mind!)

It's all rewiring our brains in really weird, unexpected and often unfortunate ways -- that much I'm sure of.

~ ~ ~
Simon Dumenco is the "Media Guy" media columnist for Advertising Age. You can follow him (sorry) on Twitter @simondumenco