Ad Age Deputy Managing Editor Michael Learmonth has been complaining for years now about overly long pre-roll ads -- including pre-rolls that are almost as long as the video clips they precede. Here's one of his earliest cranky tweets on the matter:

Free advice: A 30-second ad on a 36-second web video is a terrible user experience and makes people hate your brand

I have this to say to Michael: I like you a lot, gentle colleague, but clearly you're an ungrateful man. You want content? You're gonna have to pay for it in time/discomfort/rage, my friend.

I've been thinking about the state of web video -- and Michael Learmonth and his discontents -- because yesterday morning TMZ posted a 45-second celebrity video clip preceded by a 30-second pre-roll spot. The celebrity in question is one Justin Bieber, who is shown, in TMZ's words, "pissing into a restaurant mop bucket... and laughing like he's the king of the world." As a bonus, "at the end of the video, Bieber sprays a photo of Bill Clinton with cleaning liquid for some reason... saying, 'F*** Bill Clinton!'"

TMZ mostly lets the Clinton thing slide, but is hopping mad about the bucket-peeing. Per TMZ:

The clip was shot in NYC earlier this year -- we're told Bieber and his idiotic friends were leaving some nightclub, exiting through a restaurant kitchen, and Bieber decided he needed to take a leak. But rather than go to a bathroom like a civilized person, Bieber -- wearing pants that should literally be illegal -- whipped out his junk and whizzed into a yellow mop bucket used to clean the restaurant's floors... meaning whoever's job it was to mop the place up had to physically change Bieber's disgusting piss water.

But for me, what really stood out about the experience of watching the clip was the set-up it got: a 30-second pre-roll ad for Coppertone -- a feel-good nostalgia-fest that begins with an on-screen question:

"What does the smell of Coppertone remind you of?"

Obviously the answer is: Justin Bieber peeing into a mop bucket.

(The various people in the ad, sadly clueless about the Bieber clip, offer their own opinions -- "the beach," "sand castles," "volleyball" -- that you should disregard.) 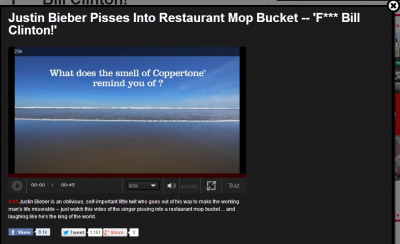 It's apparent that Coppertone bought a lot of video inventory on TMZ, because almost every time I reloaded the Bieber clip throughout the day yesterday, the "Smell of Coppertone" ad played. (I kept on playing the clip into the evening to see if anyone at Coppertone or Coppertone's agency would notice their ad's unfortunate juxtaposition and ask TMZ to move it away from the Bieber clip, but... nope.) This morning, other spots have been cycling into the pre-roll slot -- including promos for the upcoming Matt Damon movie "Elysium" and the Netflix series "Orange Is the New Black" -- but it was Coppertone that got to enjoy most of the celebrity halo effect -- or splatter effect -- during the Bieber clip's blockbuster first day on the web.

My point is this: Yes, I agree with Michael Learmonth that disproportionately long pre-rolls on short clips are insanely annoying, but what's even more problematic is the indiscriminate buying of ad inventory within video across the web. Media buyers too often just look for scale -- TMZ, which has a massive audience, can certainly offer that -- without giving even a moment's thought to the context in which a brand's message will appear. And that's a big part of the reason why there is so much gross content about celebrities on the web -- because a lot of big brands and their agencies are blindly buying pricey video-ad inventory that directly supports the publication of gross content about celebrities.

But I wonder: If you went up the chain of command at Merck, the pharmaceutical conglomerate that owns Coppertone, would the marketing folks and executive board and other assorted brand stewards be happy to realize that they were effectively the launch sponsors of a video clip of an "oblivious, self-important little twit" (TMZ's words) pissing in a bucket?