What Took Us All So Long to Figure Out the Fatal Flaw in Zuckerberg's Law? | Ad Age
Skip to main content
Sign In Register

What Took Us All So Long to Figure Out the Fatal Flaw in Zuckerberg's Law?

You Know, There <em>Are</em> Actually Limits to Human Attention Spans
READ THIS NEXT
Maybe your company should hire a Chief Sanity Officer

"I would expect that next year, people will share twice as much information as they share this year, and next year, they will be sharing twice as much as they did the year before," he told the assembled masses. "That means that people are using Facebook, and the applications and the ecosystem, more and more." That simple statement was received as an oracular pronouncement in large part because various observers, including The New York Times' Saul Hansell, immediately dubbed it Zuckerberg's Law. It was an obvious echo of Moore's Law, the historical computing trend first described in 1965 by Intel cofounder Gordon Moore, who noted that the number of transistors contained on mass-produced chips -- i.e., computing power -- tends to double every year. 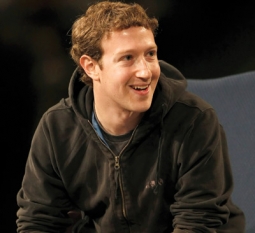 Zuckerberg, of course, has done much to make sure his pronouncement would come true -- effectively forcing users to share more and more by tweaking the Facebook interface and its privacy policies, as well as by signing deals with the likes of Spotify so that Facebook-user activities would be automatically shared.

But it turns out that there's a law that trumps Zuckerberg's Law: the Law of Diminishing Returns.

General Motors certainly sees it that way, given that it announced it was pulling $10 million of its paid advertising from Facebook just before the social network IPO'd, citing the ads' lack of effectiveness. Facebook has been scrambling ever since to counter that bad bit of publicity, notably releasing a

research report last week from its partner ComScore suggesting that , gosh, Facebook ads do work. Really! As my colleague Cotton Delo wrote, the ComScore research was intended "to show that exposure to earned-media impressions -- or content that a brand's fans or their friends might see organically -- results in more purchases. It also said premium Facebook ads result in more purchases."

The ComScore report had to be taken with a grain of salt -- it was commissioned by Facebook, after all -- but was certainly a welcome hit of good PR for the social network, especially given the data that ComScore had released just a day earlier. Facebook's U.S. uniques, said ComScore, creeped up just 5% in April, year-over-year, vs. 24% year-over-year growth in April 2011 and 89% in April 2010. Obviously, Facebook is reaching market saturation in much of the First World.

But that 's OK, right? Because Facebook can keep on making more and more friends at the corporate/partner level with the right sort of people -- like Tim Cook, Apple's CEO. Last week, Apple announced that the forthcoming upgrades of its mobile and desktop operating systems would more tightly integrate with Facebook. Whether you're a heavy or light Facebook user, that 's supposed to make your life easier/better.

But as ZDNet Editor-in-Chief Larry Dignan put it in a post last week titled "iOS 6 Facebook Integration: A Frictionless Sharing Nightmare," the promise of getting to "log in to Facebook once and share away" without having to worry about launching an app, will soon result in way too many people who will "forget they're oversharing and ultimately have a cringeworthy event. ... Unless you manage Facebook closely, you'll wind up sharing more than you want. Aside from the obvious battery-life issues, the integration may encourage people to stay logged out of Facebook."

Zuckerberg might argue that the concept of "cringeworthy" oversharing is meaningless to digital natives, and that personal privacy/boundaries are fuddy-duddy notions that will diminish as everyone gets more comfortable with their lives becoming open (Face)books -- and as old fogies who still care about privacy/boundaries shuffle off this mortal coil. Fine. Maybe that 's true. And maybe a lot of people won't log out of Facebook on their Apple devices for fear of oversharing.

Then what? Well, that 's where the Law of Diminishing Returns comes in. Because a massive flood of new Facebook "shares" from iOS users will become a nightmare in another way: The noise will increasingly drown out the signal.

As Ad Age reader Jeff Greenhouse put it in

a comment on AdAge.com last week, "From my own perspective, if my friends share twice as much content on Facebook, I'm not likely to spend much more time than I do now looking at it. There's a good chance that all that extra content will just flow past me unnoticed. I'm not convinced that there is much extra untapped time/attention out there."

I already feel that way now every time my glance falls on a Facebook friend's automated Spotify notification telling me what song they're listening to. I think, D'oh! Facebook just kidnapped my eyeballs and wasted another second of my life! Damn you, Zuckerberg!

See, I've got a mix of close friends and acquaintances on Facebook. But even if I had only legitimately good friends on Facebook, well, I can tell you I definitely don't share musical tastes with most of them. For me, the idea of forcing us to all live in an ecosystem that turns our mobile devices and laptops into persistent tattletales is not only useless but maddening. Automatically disseminating/publishing certain information at mass scale -- like what your "friends" are consuming at any given time -- is simply a waste of time and bandwidth.

And to brand marketers: Good luck trying to get noticed amid the deluge.

How is it that Mark Zuckerberg, obviously a smart fellow, cannot see all this? How could a guy who has focused quite intently on some things in his life -- like building Facebook -- could not be aware of the limits of consumer cognition and human attention spans? How could a guy so brilliant not understand that his increasingly overshare-y Facebook is diminishing our collective capacity to focus on the stuff we really might care about in social media, let alone advertising messages?

I blame it on what I call Zuckerberg's Bubble -- not a reference to the current (and rapidly deflating, thanks to FB's IPO) tech bubble, but to the social bubble Zuckerberg has been living in since his Harvard dorm-room days, when he started monomaniacally coding Facebook into existence. When you're in college, and still trying to figure out your identity, you're almost hardwired to feel like you're being left out (especially if you're a nerd) of all the coolest stuff that 's going on, both on and off campus. So you convince yourself that you actually care what all your friends and acquaintances are doing at all times.

And then you graduate from college and get a real job and start building your own family, and you suddenly realize that there's more to life than obsessing about what everyone else is doing.

The other thing about Zuckerberg's Bubble is that it's obviously a place where there is scant knowledge of the history of effective sponsored media, which is about gathering together like-minded audiences around compelling, worthwhile content, and then selling advertising against that content.

It's not about strafing people with undifferentiated minutiae and doubling the amount of it every damn year.