Wendy's Brings The Bacon to This Week's Viral Video Chart

#LikeaGirl, Google App Continue To Do Well
READ THIS NEXT
The Geico Gecko returns to the weekly most-viewed video ad chart 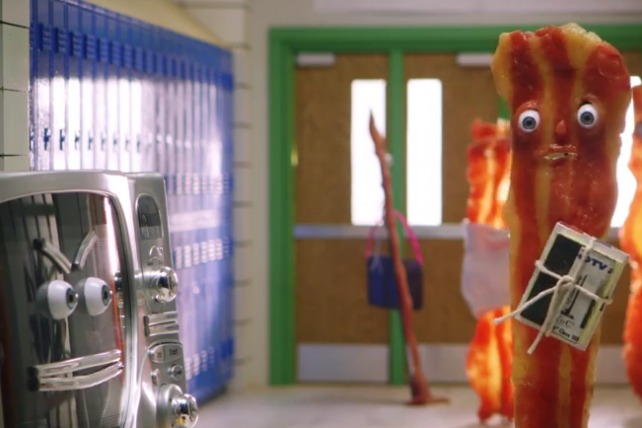 Wendy's 'Because Baconator' premiered at No. 6 on this week's Viral Video Chart
Credit:

Bacon really does go great with everything, including viral video. The smoky strips make an appearance in Wendy's spot on this week's Viral Video Chart, which tracks views of campaigns in the week ending each Sunday, as compiled by Visible Measures.

Wendy's "#BecauseBacon" debuted at No. 6 and features the struggles that many adolescent bacon teens face, particularly the danger of "getting nuked." When a young bacon strip is trying to get to class to prepare himself to become a Baconator, he's approached by a sleezy microwave looking to get nuked because "it'll get you nice and crispy."

Meanwhile, T-Mobile's CEO John Legere stars in the company's new strange spot, which premiered at No. 3. The nearly five-minute spot features Mr. Legere (donning a black and pink jacket and t-shirt) explaining T-Mobile's new "Mobile Without Borders" initiative, the latest installment in the "Uncarrier" plan, expanding it to Canada and Mexico.

Always' "Unstoppable" fell to No. 2 after a premiere on top of the chart last week. The spot showcases the societal challenges and limitations presented to girls. The limitations are destroyed after the girls write them on white boxes, then hit and kick the boxes down.

Google and Amazon continue to duel it out with two spots showcasing their respective apps. While Amazon's "Amazon App" spot fell three spots to No. 7, Google's "Google App" rose to No. 4.