NEW YORK (AdAge.com) -- Microsoft's Xbox concept, Project Natal, had the biggest surge in viewers this week (up 84%) thanks to an announcement, made at the Consumer Electronics Show in Las Vegas, that the gesture-control add-on would be available in time for the 2010 holiday season.

New arrivals on this week's chart from Visible Measures includes the first video from Starbucks to make the top 10, Love Project, focused on raising awareness and donations for AIDS research and prevention in Africa. The spot is pretty elaborate, featuring performers in 156 countries singing the Beatles "All You Need Is Love." The gimmick: They're doing it all at the same time, 1:30 GMT on Dec. 7, 2009.

Further down the gimmick scale is another chart debut from Parallels, which makes PC virtualization software for Macs. This spoof of a spoof starts to make a little sense if you're familiar with the original, "I'm on a Boat," from Andy Samberg and the rest of the comic geniuses in The Lonely Island troupe.

Another debut comes in the form of another it's-bad-but-you-can't-take-your-eyes-off-it infomercial from, er, the shaping undergarment brand Booty Pop, which drove nearly 300,000 views last week. These panties promise to provide "that bootylicious perky pop that all women want!" and have received a decent amount of mainstream media attention (Kelly Ripa's a customer).

If we learn anything from the car battery manufacturer on the list, it's that if Diehard can make the viral chart, any brand can! 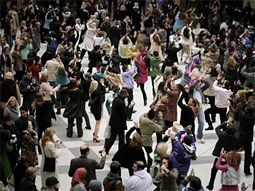