As you know if you read last Friday's "Top 10 Trending Topics" article, we've reformatted this weekly chart to give you an unfiltered look at the trendiest memes on Twitter, using the proprietary algorithm developed by our editorial partner, What the Trend, which monitors both the rank and duration of every single topic that pops up on Twitter's global Trending Topics chart. This week, Twitter has been largely gripped by both sports fans and what you might call hashtag enthusiasts -- participants in the global call and response to often arbitrary, up-from-nowhere verbal tweet games.

Speaking of hashtag trends, I thought I'd give you a closer look at one that didn't make our top 10: #IfIHadSuperPowers, which peaked at No. 24 this week. What's interesting about that hashtag trend is that it's both brand-related and not -- depending on the eye of the, uh, betweeter. 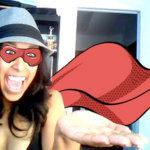 A 'hero-ized' TwitPic from Radio Shack

Some background: Radio Shack came up with this Twitter/TwitPic promotion:

Want a chance to become an instant Holiday Hero and win a prize worthy of your superhero status? Here's how. First, follow The Shack on Twitter at http://twitter.com/RadioShack. Then, on Dec. 9, 2010 hold out your hand and tweet a Twitpic like the one above [see it here] and include #IfIHadSuperpowers. We'll send you back a new Twitpic making you an instant Holiday Hero. So why does your hand need to be held out? Well, we need someplace to drop your prize! Holiday Heroes always give the perfect gift, and we're here to help make that easier for you. Throughout the day we'll randomly select participants and award them with an awesome gift worthy of a superhero. Prizes include a Samsung Tablet, Garmin GPS, an AUVIO Portable Digital TV, an E-Reader, RadioShack gift cards and more! We'll let you know if you've won when we send you back your "hero-ized" Twitpic.

Cute, clever promo -- but like many memes on Twitter, #IfIHadSuperpowers morphed and splintered and took on new meanings in real time (Twitter sometimes feels like the ultimate game of telephone). And now most of the Twittersphere that is tweeting the hashtag (it's still on Twitter's Trending Topics list right now, early Friday afternoon EST as I write this) is doing so with no awareness of the Radio Shack connection (e.g., "therealdiggory: #ifihadsuperpowers I would go back in time and insist fervently that Harry Potter rightly won the Triwizard cup and should take it alone").

I asked Liz Pullen, trend analyst at What the Trend, to offer her thoughts on the phenomenon:

"Radio Shack adopted a strategy I see happening more and more. They created -- or latched on to, it's hard to tell -- a neutral hashtag to promote a contest. But once #IfIHadSuperPowers appeared on Twitter's Trending Topics, it took on a life of its own. People are using it without any knowledge of the Radio Shack campaign, so we really can't identify Radio Shack as the main topic of the trend."

So, Liz notes that, despite the runaway success of the #IfIHadSuperpowers meme, "Radio Shack does not appear on this week's trend chart. I see this happening more and more, where there are multiple, simultaneous uses of a hashtag because users -- and especially users from different countries -- see different meanings in it. Another example this week, a smaller one, was 'Pooh.' It originally referred to NBA player Pooh Jeter [born Eugene Jeter III] of the Sacramento Kings. But users saw it, got nostalgic, and talked all about Winnie the Pooh."

And on that note, I leave you with a new hashtag meme to contemplate throughout your weekend: #IfWinnieThePoohHadSuperPowers.