I really expected BP to make our weekly Top 10 Most Tweeted Brands chart, a collaboration between Advertising Age and What the Trend. After all, if Adobe could make the list last week because Steve Jobs bad-mouthed its Flash product, surely BP's role in the ongoing environmental disaster in the Gulf of Mexico would coat the oil giant in Twitter notoriety?

But no. Various trending terms related to the oil spill propelled it to only the 37th most-tweeted topic overall this week, and BP was absent from most of those tweets. The proper noun most associated with the disaster is "Gulf," despite the fact that plenty of press reports refer to it as the "BP oil spill." BP has the added advantage of not technically having its name on the failed equipment behind the spill -- unlike, say, Exxon with its Exxon Valdez tanker back in 1989. Meanwhile, BP CEO Tony Hayward has been busy attempting to shift blame to the company, Transocean, from which it was leasing the leaky oil rig. "This was not our drilling rig and not our equipment," he told the BBC earlier this week. "It was not our people, our systems or our processes. Their systems, their people, their equipment." Got that? (According to Reuters, though, "Under the Oil Pollution Act of 1990, BP has responsibility to pay for clean up of the spill that could run into the billions of dollars, as well as up to $75 million liability for economic damages, according to Alfred Kuffler, a partner at law firm Montgomery McCracken in Philadelphia and an expert in maritime pollution law.") 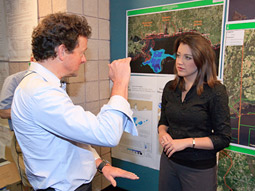 BP CEO Tony Hayward gives an interview to a TV news reporter at BP's Mobile Command Center.
What mattered way more to the Twittersphere this week than BP? Entertainment brands, mostly, including that Justin Bieber kid, along with Jonas Brothers, Miley Cyrus, Chris Brown (the Rihanna-battering singer, in the midst of continuing career rehab, celebrated his 21st birthday on Wednesday, so his fans tweeted their happy wishes) and the increasingly ominipresent South Korean boy band Super Junior.

By the way, I'm somewhat arbitrarily counting Mother's Day as a brand for the purposes of this week's list given that it's a contrived holiday cynically exploited by all manner of marketers to move merch your mom probably doesn't even want. Unlike Star Wars Day (the force that propelled the Star Wars brand onto our list week), which I'm pretty sure is mostly a religious holiday.

FYI: Other brands that loomed large on Twitter this week but didn't quite crack our Top 10: Apple (which announced that it's already sold 1 million iPads), "Iron Man 2," Groupon (thanks to fans of the group-buying service tweeting details of its daily deals), Continental Airlines (thanks to its announced merger with United) and "Family Guy," the Fox animated sitcom that aired its uproariously funny (and unexpectedly touching) 150th episode last Sunday night. (What the Trend Pro, the service we use to create this charticle, offers an in-depth look at hundreds of trends each week.)