Plus, Total Social-TV Tracking On TV's Night of Self-Loving
READ THIS NEXT
How restaurant chains are duking it out to be the best in their categories

When Ad Age kicks off the second Social Engagement/Social TV Conference in Los Angeles in just a few weeks (tickets, as of this writing, are still available), one of the big topics of conversation will be the connect/disconnect between social chatter and ratings .

Last night's Emmys telecast on ABC shed some of its 18-to-49 audience vs. last year -- see The Wrap's round-up of the preliminary numbers -- with football on NBC winning the night in that demo. (Overall viewers for the Emmys were up year-over-year -- 13.2 million viewers vs. 12.4 million in 2011.) But social-media activity around TV's so-called tentpole events just seems to keep on growing, and the Emmys were no exception. Plus , thanks to Jimmy Kimmel's little skit starring Tracy Morgan -- in which he asked viewers to tweet that the "30 Rock" actor just passed out on stage, and then had Morgan lie down to "prove" it (if you haven't seen it already, watch the brief video embedded below) -- the whole social-TV phenomenon took on the aura of stunt-meets-performance-art-meets-social-media-manipulation. 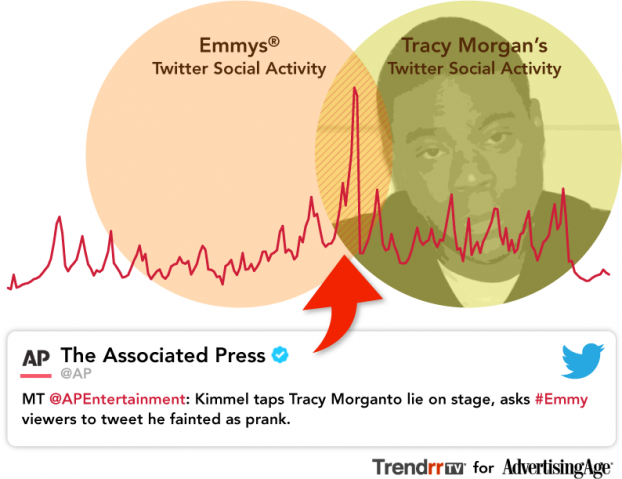