Despite ongoing turmoil and tragedy around the world, the Twittersphere seemed eager to return to its usual order of business this week: obsessing about pop culture and amusing itself with silly hashtag memes. But all the usual nonsense on Twitter didn't crowd out the continuing crisis in Japan, which takes the No. 1 spot on our weekly Top 10 Trending Topics on Twitter chart -- produced, as always, with our editorial partner What the Trend.

Much of the tweeting earlier this week involved passing around links to both mainstream and amateur coverage of the aftermath of Japan's earthquake and tsunami. (Among my tweets over the past week: a link to this astonishing Flickr photo of a street in Japan neatly split up the middle by the earthquake, as well as a link to this mesmerizing, deeply upsetting six-minute video of a Japanese town washing away in the tsunami. But later in the week, the disaster at the Fukushima Dai-ichi nuclear plant became the Twittersphere's primary hard-news obsession. The apparent bungling, miscommunication and general cluelessness of the plant's operator, Tokyo Electric Power Co. (Tepco), is calling to mind BP's Keystone Cops-ish handling of the Gulf oil spill last year. (By the way, yesterday Tepco started up an informational Twitter account in Japanese, @OfficialTEPCO.) 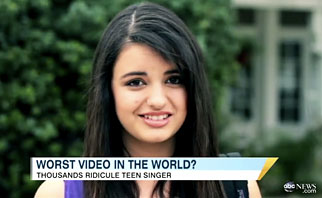 I was kind of hoping it'd turn out to be some sort of performance-art-esque hoax (James Franco in drag?). But yesterday, The Daily Beast scored the first interview with Black and revealed that her mom paid $2,000 to Los Angeles vanity record label Ark Music Factory for a song/video combo for her fame-seeking daughter.

My colleague at What the Trend, trend analyst Liz Pullen, says that "Friday" reminds her of the Robin Sparkles music videos from the CBS sitcom "How I Met Your Mother." (As Liz explains, "On the show, the character Robin Scherbatsky was a teenage mall singer, like Tiffany, in Canada in the '90s." Please, if you haven't already seen the Robin Sparkles video for "Let's Go to the Mall!," click here immediately.

"When I first saw all the nasty comments," Black told Good Morning America this morning, "I did cry ... I don't think I'm the worst singer, but I don't think I'm the best." She also said she wanted to duet with Justin Bieber -- a terrifying prospect, as the combination of Bieber Fever and the Black Plague could easily overwhelm America's health-care system.

But never mind Rebecca Black's awful singing. The Twittersphere seems almost more obsessed with the song's lyrics, which include,

We, we, we so excited

We gonna have a ball today

I don't want this weekend to end

One of the most widely retweeted tweets about the song's lyrics came from the (satiric and sacrilegious) @Jesus_M_Christ Twitter account: "BREAKING NEWS from Rebecca Black: Tomorrow is Saturday and Sunday comes afterwards."

That only served to remind me of an email exchange I had with the photographer/publicist Jenny Hodges last September, in which she pointed me to a YouTube video titled "The Black Eyed Peas Have Officially Written the Worst Song Ever," a deconstruction of the hit "I've Got a Feeling," which includes the lyrics,

We know what we say say

So I searched on "rebecca black will.i.am" to see who else on Twitter made the connection (I knew I couldn't be the only one). Among those who did: the hilarious songwriter/comedian Bo Burnham, who tweeted, "Can we stop ganging up on 13 year-old Rebecca Black for making crappy music and start ganging up on 36 year-old Will.i.am?"