Which TV Networks Won the Year for Social Buzz?

The Top Social-TV Networks of 2011, According to Bluefin Labs
READ THIS NEXT
How restaurant chains are duking it out to be the best in their categories

For the last half year (since July 1) Ad Age has had an editorial partnership with Bluefin Labs, the Cambridge-Mass.-based social-TV analytics company. Together we've produced more than a dozen "charticles" -- charts with commentary -- that have dug into the fascinating art/science of tracking and analyzing the connections between television and social media.

It's been a great year for "social TV" and a great year for Bluefin Labs (which, as my colleague Michael Learmonth reported, just signed a deal with Starcom Mediavest Group). To close out 2011, we've put together a pie chart with Bluefin that shows which broadcast and cable networks dominated social TV this year.

Starting with Fox, the big social-TV winners of 2011 are: 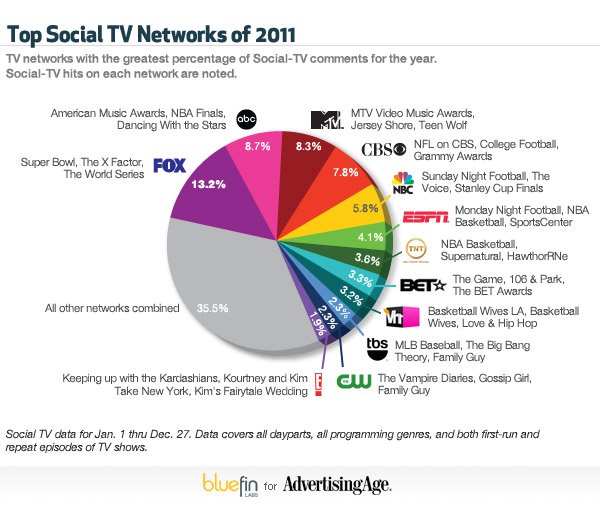 Some notes about the graphic above: