What Have Chevy, Pepsi, Sony and Verizon Gotten Out of 'X Factor'? A Look at Their Social-Media Lift | Ad Age
Skip to main content
Sign In Register

What Have Chevy, Pepsi, Sony and Verizon Gotten Out of 'X Factor'? A Look at Their Social-Media Lift

Bluefin Labs Study Commissioned by Advertising Age Reveals A Clear Brand Winner
READ THIS NEXT
How restaurant chains are duking it out to be the best in their categories
Britney Spears in Pepsi's 'X Factor' commercial
Credit:

We've been monitoring the social-media footprint of Simon Cowell's U.S. edition of "The X Factor" throughout the fall. As the first season nears its finale (on Dec. 22 ), we decided to take a close look at the social-media buzz that 's rubbed off on the Fox singing competition's marquee sponsors: Chevy, Pepsi, Sony and Verizon. Ad Age worked with our editorial partner Bluefin Labs, a Cambridge-Mass.-based social-TV analytics company, to drill deep into the data it's been collecting on the show from the very start.

The result? All the major "X Factor" sponsors are getting evident lifts in social-media conversations about them on the days that "X Factor" airs.

Some notes about the chart below: 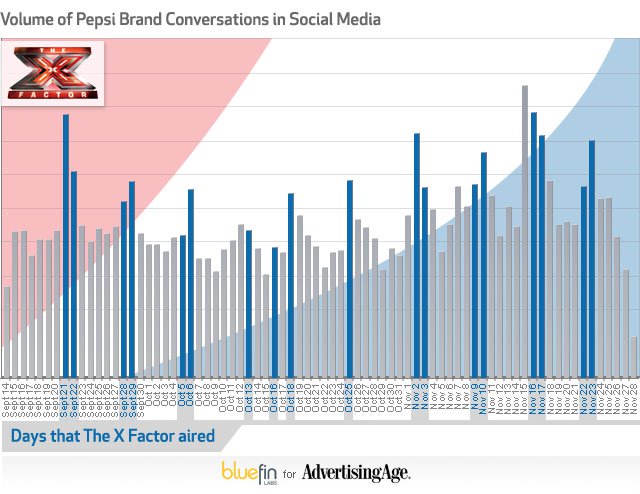