When Its Chefs Fry, Food Network Ought to Boil | Ad Age
Skip to main content
Sign In Register

When Its Chefs Fry, Food Network Ought to Boil

Tuning In: Guy Fieri Controversy Should Put Scripps on the Alert
READ THIS NEXT
How restaurant chains are duking it out to be the best in their categories 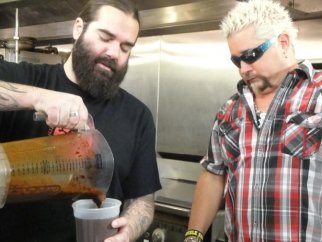 Guy Fieri protects his eyes from the aroma of spicy Bourbon Beach Sauce on 'Diners, Drive-Ins and Dives'

It's easy to fret over Mr. Fieri. Every time I tune in to his signature show on Scripps Networks' Food Network, "Diners, Drive-Ins and Dives," he's chomping into some piece of red meat that 's been smoked, brined, slathered in butter and smothered in cheese. One day, I fear, he's going to tuck into a "Chorizo Garbage Plate," just one of the many recipes he's sampled in the course of snacking on road-trip fare since 2006, and start to utter his trademark phrase, "This is off the hook," only to clutch his chest and tumble to the ground with a thud (a different kind of "dive" for the show).

But my anxiety is now spreading to the cable network that helped him become famous. To be sure, there's nothing in the recent controversy surrounding The New York Times's withering review of Mr. Fieri's new Times Square restaurant that is going to spark the demise of the Food Network. Yet the trouble certainly makes me think the people over at Scripps need to fine-tune the contracts they have with their on-air talent.

Why should a publicly-traded corporation concern itself with the side jobs of its various celebrity chefs? Mr. Fieri's recent smackdown has nothing to do directly with the finances of the Food Network. No one at Scripps faces layoffs if his new restaurant fails to impress the hoity-toity palates that hang on every adjective in the food reviews of The New York Times.

Even so, Mr. Fieri's run-in with the Gray Lady does everything to undermine the image he has established on Food Network as a sort of culinary everyman who can find a gourmet experience in chicken sliders and chili dogs as easily as someone else might find with a medium-rare filet mignon and a glass of pinot noir. If the Times review is to be taken at face value, Mr. Fieri doesn't seem all that involved in the workings of his restaurant or that concerned with the quality of the service and food dished out therein (of course, he told NBC's "Today" show Thursday that he wasn't satisfied with the restaurant's operations and expected them to improve).

Whether or not you agree with the review, its implications have to be damaging to Mr. Fieri's brand -- and, because he appears on Food Network for so many hours each week, that of the cable network as well. I'd argue that every brand extension Mr. Fieri has -- hosting a game show on NBC or running various restaurants -- could have a direct tie to the work he's done with Food Network and the image he's built over time.

The top executive of Scripps sounds as if he agrees. "Advertisers trust these brands," said Ken Lowe , Scripps Networks' longtime CEO, during a Nov. 1 conference call. Because advertisers view Food Network shows as "a safe haven" for their messages, their business stands up well even as the economy and ratings fluctuate, he said.

The reliability of the company's various networks are "very important to our story and always will be," he added. Who makes the networks what they are? In the case of Food Network in particular, it's the chefs and celebrity food wranglers.

Looking for a previous case study? Take a look at Paula Deen, another Food Network personality who rose to fame cooking high-calorie dishes and brewing up a likable aw-shucks demeanor. This very high-profile Food Network personality disclosed in January that she had been suffering from Type 2 Diabetes for three years, even as she pushed recipes on her program that were heavy on ingredients from which most diabetics would shy away. The reason for the revelation? A deal to promote a diabetes program from pharmaceutical company Novo Nordisk -- an act that made it seem Ms. Deen was more interested in her wallet than the stomachs (and other organs) of her fans.

Food Network's revenue increased to about $199 million in the third quarter, a jump of 10.5%, according to figures from SNL Kagan. Perhaps the momentum means Scripps executives can ignore these minor controversies, wait for the media hoopla to die down and keep things moving along. I'd argue that each of these brouhahas is the equivalent of a small cut, however, and if more of them take place, the company may have an awful lot of scar tissue it will need to heal.

It's clear that Scripps has moved in recent years to take more of a lead in managing the promotional opportunities of its on-air talent. A recent ad effort for John B. Sanfilippo & Son's Fisher Nuts pairs the nut with "Chopped" judge Alex Guarnaschelli, and the executives behind the campaign recently told me Scripps helped broker the deal with the chef, although the pact was separate from the ad deal the company had with the TV networks.

My guess is that some of the personalities who have been with Scripps and Food Network for some time have a freer hand in the promotional opportunities they devise. Scripps may not have realized the promotional potential for some of these people in its salad days; or, conversely, the chefs may have been more popular at the time of their signing than the TV outlets that lured them. "Obviously, we can't discuss talent contractual arrangements," said a Scripps spokesman.

If Scripps isn't riding herd on Mr. Fieri, Ms. Deen, Alton Brown and the rest of its culinary all-stars, it should. Mr. Fieri would never have achieved his current stature if he hadn't won "The Next Food Network Star" in 2006, and yet he appears to have more control over his outside activities than the network that made him a household name.

In the restaurant business, it takes just a few bad reviews to send your customers scurrying elsewhere. You'd think a network that runs hours of programs like "Mystery Diners" and "Restaurant Stakeout," which drive that very lesson home again and again, would be more concerned about the potential its hosts have to generate bad -- and brand-damaging -- publicity.