Why Comcast Isn't Throwing NBC Universal a 'Day One' Party

Tuning In: 'Burke's Law,' Once a Kooky TV Drama, Has an Entirely New Meaning
READ THIS NEXT
How restaurant chains are duking it out to be the best in their categories

The Burke effect: Talk about different operating styles. When General Electric acquired the entertainment assets of Vivendi Universal in 2004 to create NBC Universal, the company poured on the charm, holding a glitzy press conference in the very TV studio from which "Saturday Night Live" is broadcast. Now that Comcast is taking over the company, you can get ready for the sound of silence. 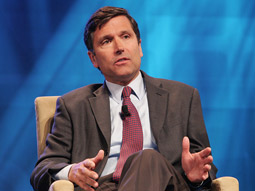 Steve Burke
Steve Burke, the Comcast executive who is overseeing NBC Universal going forward, is focusing on internal communications, not external, according to executives familiar with the situation. Today, thousands of NBC Universal employees are being indoctrinated into the new corporate culture with a "Town Hall" as they prepare for what the new company is calling "Day One" -- the first day of Comcast rule over the Peacock.

This colorful bird may crow (or whatever the alarming Peacock squawk is called) considerably less going forward -- unless it does it with splashy new shows. As executives go, Mr. Burke is simply not Jeff Zucker, the outgoing chief executive of NBC Universal. Where Mr. Zucker enjoyed pressing the flesh and making bold proclamations about everything from Jay Leno in prime time to "super-sized" episodes of "Friends" to NBC's relative unimportance compared with the company's better-performing cable networks, Mr. Burke prefers to keep his mouth shut and let the company's assets do the talking. Mr. Zucker was left in the unfortunate position of doing lots of talking and then seeing his company's flagship asset, its broadcast network, fall farther and farther from title contention.

While we expect to see little of NBC's top executive, we expect to hear little from its operating chiefs, too. That likely means fewer public appearances by Lauren Zalaznick, one of the executives tasked with running the company's successful entertainment-based cable outlets and one who had been out in force in recent months. We may well hear less from new honchos installed at the NBC broadcast network as well. Frankly, the network is such a mess at present, with a fall schedule that has all but collapsed and a flailing new "Law & Order" series, that the people running it are likely to have their hands full.

In 1963, ABC launched a new series called "Burke's Law." It bordered on the inane, focusing on a millionaire chief of detectives, Amos Burke, who took on crime solving when he wasn't chasing skirts. A 1994 revival on CBS had Burke's son taking point as faded guest stars including Don Knotts and Eva Gabor showed up on screen. The only law that show laid down is how ridiculous the TV business can be.

And there's no appearance by Carol Channing or Polly Bergen to help lighten the load.

Welcome to "Day One," NBC! Expect "Day Two" and "Day Three" to be pretty similar.