Some Shows Need Commercials. We Nominate HBO's 'The Newsroom'

Imagine if someone force-fed you giant hunks of cauliflower and broccoli for an hour or more. For the first 10 minutes of this process, you might think, "At least I'm getting lots of fiber and minerals." But by the last quarter-hour, you'd just be trying to escape. 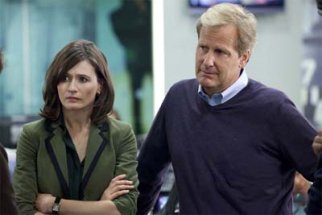 Unfortunately that 's the kind of comparison that comes to mind watching HBO's new Aaron Sorkin series, "The Newsroom." I can't think of another TV series that 's such a chore to view. This may be the video equivalent of having 10 bowls of Total -- without milk. It's rough enough, in fact, that I'd like to make a radical suggestion to HBO: Start running commercials during the program.

My words will fall on deaf ears. HBO, after all, has renewed this still-embryonic chronicle of a fictional newsroom for a second season. And the network has accumulated millions of paying subscribers on precisely the understanding that there are no ads. But Mr. Sorkin needs something to make him pace the program and deliver something more palatable for the common viewer. Interruptions from paying sponsors would do nicely.

Simply put, "Newsroom" is stuffed with precious, overlong scenes of TV-news people discussing ethics, spouting bromides and waxing on and on about everything from why romantic relationships go sour to the ins and outs of how real news-program segments ought to be constructed. A scene from the second episode in which the new executive producer exhorts her young team toward higher standards by covering a whiteboard in journalism-speak would work better in the pages of the Columbia Journalism Review. The scene eventually becomes more or less unwatchable, a word that is hard to use in a column about Mr. Sorkin, the creative force behind such works as "A Few Good Men," "The West Wing " and "Sports Night."

"Sports Night," however, shows what ad breaks can do for Mr. Sorkin's work. The half-hour drama, which debuted on ABC in 1998, was the writer's first TV series and an early signal of what he could do with the platform.

Much like "The Newsroom," "Sports Night" focused on the inner workings of a cable network, in this case a would-be ESPN knockoff known as Continental Sports Channel. And much like "The Newsroom," "Sports Night" offered viewers a smattering of how the sausage is made at a daily newscast, some office romance, insight into how big corporations view TV assets and lots of the polished, snappy repartee that is a hallmark of Mr. Sorkin's work.

Unlike "Newsroom," though, "Sports Night" ran on ad-supported TV, allowing Mr. Sorkin about 20 to 22 minutes to build a story chopped into discrete segments by unyielding commercial breaks. He was forced to edit himself, keeping the best or most important character twists, rapid-fire exchanges and story ideas, and jettisoning the rest. I recently watched the entire two-season run of this series via Netflix and was struck by the degree of polish and intensity applied to the script for each episode. So integral was Mr. Sorkin's voice to "Sports Night" that later episodes, written with the help of other writers, seem to have some of the air taken out of them.

Nothing of great import ever happened on "Sports Night." The integrity of a nightly sports broadcast does not make for life-or-death drama. But even the whither-serious-news angle on "The Newsroom" is hardly as instantly interesting as dramas about cops or doctors. It's only the latest challenge in Mr. Sorkin's ongoing quest to make the inner workings of the TV business compelling for mass viewership. Mr. Sorkin's 2006 NBC drama, "Studio 60 on the Sunset Strip," worked off the premise that the quality of an ersatz "Saturday Night Live" program was a subject that would inspire intense debate about popular culture. Now his "Newsroom" would have us believe that a pundit-led nightly newscast is of paramount importance to the ongoing dialogue of our time.

Mr. Sorkin's characters have to speak crisply. Directly. With a little bit of flair. And more editing.

We don't want to hear them agonize forever about what went wrong with a love affair from years earlier. We don't have the patience to watch what feels like an entire staff meeting about how newsroom personnel ought to work with higher-minded ideals. Unless, of course, their words and the ways in which they say them are so fascinating that we would be happy to hear them trade recipes for peach cobbler.

If that 's not the case, well, we have hours of our own office banter to drag through the filter. Why bother with "The Newsroom"?

HBO loves to gives its creators a lot of room. Who else would run "John from Cincinnati," an unfathomable series ostensibly about surfing that left most fans of creator David Milch ("NYPD Blue," "Deadwood") not only scratching their heads but totally lost? (Yes, I watched the entire one-season run). Viewers ought to be challenged, but they don't want to have their valuable time wasted.

In giving Mr. Sorkin the creative freedom he no doubt wants, HBO leaves viewers with less of what they deserve.