How to Reach Muslim Women (Hint: They're Not an Aesthetic) | Ad Age
Skip to main content
Sign In Register

How to Reach Muslim Women (Hint: They're Not an Aesthetic)

READ THIS NEXT
How restaurant chains are duking it out to be the best in their categories
Credit: Inez Van Lamsweerde / Vinoodh Matadin / Vogue Arabia

Muslims on the whole, and in particular Muslim women, are woefully under- and misrepresented in marketing, despite representing a huge consumer group. By 2030, it is estimated that Muslims will make up a quarter of the world's population, and the global Islamic market will be worth more than $5 trillion by 2020.

Yet, depressingly, in mainstream media, Muslims are still predominantly given a lacks-English-oppressed-terrorist persona. And when represented by fashion and beauty brands, the majority of Muslim women are shown with an uber-cool-light-skin-tone persona.

Representation of Muslim women ping pongs between fitting a stereotype or breaking one, not the middle ground where most of us are. Brands seem to believe that casting a Muslim woman as the star of the show ticks the box.

Here's how not to talk to Muslim women: Elle's video shows how four Muslim beauty influencers are breaking stereotypes … because they wear make-up. Of course we wear make-up.

Brands, we do not need you to normalize us as Muslims. Content like this is not about empowering Muslim women—it's a patronizing song and dance.

On the whole, Muslim women are represented as an aesthetic. Take YSL, which took a non-Muslim, non-headscarf-wearing woman and dressed her up to represent (what they think is) the shell of a Muslim woman. Vogue Arabia put Gigi Hadid in a hijab and a face veil. This is the same as a brand putting a model in a fat suit, and then claiming they're representing plus-size women.

This year, Nike announced the 2018 launch of its Sports Hijab. Arguably the bigger win for Nike would have been releasing a sportswear range. Try walking into a sportswear store and finding items that cover you sufficiently, while allowing you to breathe. Between the cropped jumpers, short-sleeved tops and mesh leggings, there is very little choice. A bigger win for Muslims—and Nike—would have been for the brand to use its influence to lobby for Muslim women to be able to compete in hijabs, or oppose the hijab ban by the basketball federation FIBA. Did I mention that Nike is the official partner for FIBA's biggest competitions, including the FIBA women's basketball World Cup, for which they provided apparel?

When the very existence of one aspect of a Muslim woman's identity is constantly criminalized, representing an aesthetic isn't enough. What are you supposed to wear your Nike Sports Hijab with? A crop top and mesh leggings?

This year, we've seen the fashion and beauty industry move the narrative surrounding Muslim women from being a political statement to being an aesthetic. It's a small step. A giant leap will be to actually represent Muslim women in their entirety—as a lifestyle, not an aesthetic.

For me and many others, Islam is a framework through which we live our lives. And because we're largely ignored by maintream brands, many businesses have sprung up out of sheer frustration—and opportunity. Examples include non-alcoholic drinks and dating apps to halal cosmetics and children's books. For every mainstream company out there, you can now find a Muslim equivalent: Netflix—Alchemiya; the Samaritans—Muslim Youth Helpline; Tinder—Muzmatch; and Airbnb—Muzbnb.

For many of us, Islam guides our values, which in turn informs our lifestyle choices and consumer behaviour across fashion, food, finance, media, leisure and more.

So if you're trying to speak to Muslim consumers, think more deeply about how your brand can resonate and connect, rather than just popping a hijabi in a campaign. 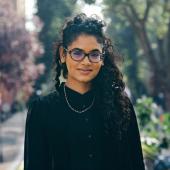 Nafisa Bakkar
Nafisa Bakkar is CEO and co-founder of Amaliah.com.
Follow View all articles by this author