As Chains Pop Up Daily, Biggest Marketing Challenge Will Be Cultivating a Coffee Culture
READ THIS NEXT
How restaurant chains are duking it out to be the best in their categories

A wooden sign in the lobby of Starbucks' China headquarters lists the provinces where the company operates and the number of cafes in each locale. But the coffee chain is growing so fast that it's become impossible to maintain the tally.

Ms. Silloway, a vivacious Chinese-American raised in New York, came to China a decade ago to lead Coca-Cola Co.'s Sprite in its second-largest market. She joined Starbucks a year ago, eager to return to her marketing roots after five years at executive-recruiting firm Korn Ferry International.

But unlike Sprite, which was already a giant in China when Ms. Silloway joined it, Starbucks is just now gaining its momentum. The Seattle-based company has been in China for 13 years, with an initial presence largely in major international hubs such as Beijing, Shanghai and Guangzhou. There's huge potential for growth as it expands into lesser-developed cities with newly robust discretionary spending. But it also faces uniquely Chinese challenges when it comes to customs and taste. Ms. Silloway's marketing strategy focuses as much on educating the world's oldest and largest tea-drinking culture as it does traditional branding and promotions.

Starbucks expects China to become its second-largest market by 2014. The company has more than 600 stores in the country and aims to reach 1,500 by 2015. It's a growth strategy that involves opening roughly one store every day for three years.

"We've been very blessed. Starbucks has very high brand awareness to a lot of people in China, so when we go to a new city or existing city, a lot of customers know about the brand already," said Belinda Wong, president of Starbucks China.

Starbucks' greatest asset is that its target consumer in China sees it as an aspirational global brand offering an international cafe experience.

'You've arrived as a town when'

"The way you know when you've arrived as a town or city is when Starbucks arrives. It used to be McDonald's, and before that it was KFC," said Paul French, chief China-market strategist at market-research firm Mintel. "Now Starbucks is the place where you go if you have cash and want to flash it. The new middle class can sit there and look out the window and drink their Frappuccino and say, "We've made it.'"

Ms. Silloway, who works with the China offices of BBDO, JWT and Agenda on advertising and Edelman for PR, looks after the food and beverage categories and new-product innovations as well as marketing and branding. "It's a broad remit but it makes a lot of sense because it allows us to have a complete picture of how the brand shows up in total. We're always working in lockstep with operations," she said.

That integration was on display on a sunny late-summer day in the dusty city of Nanchang, as Starbucks opened its first location in the traditionally agricultural province of Jiangxi and in its 49th city in China. Five hundred miles inland from Shanghai, Nanchang is among hundreds of second-tier cities across China with major untapped purchasing power. Retailers such as Uniqlo and H&M recently opened outlets here. Starbucks is in a downtown shopping mall, between an Omega watch store and a KFC.

The grand opening kicked off with coffee education for local media. An ultra-perky barista named September told the packed room that "latte" means milk in Italian, so a latte is a coffee with milk. "American-style coffee is black coffee," she explained, "so if you order one in the morning you'll be awake and alert all day!"

By early afternoon the cafe was buzzing and packed with customers. Some ordered with ease; others asked for suggestions. Vanilla latte is a common recommendation, described by baristas as "not too sweet."

One young man with a peach-fuzz mustache wearing a Bob Dylan T-shirt ordered a coffee -- at room temperature. (It's common in China to serve water, soda, beer and other beverages at room temperature.) The barista paused, then suggested an iced coffee with no ice. The Dylan fan seemed happy with that . 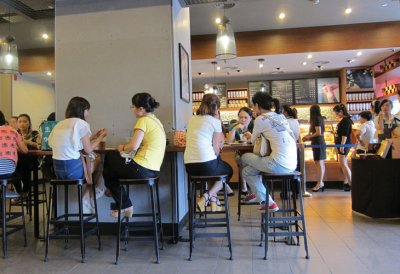 In China, Starbucks is a place to sit back and relax.

High-school student Yang Yang, 16, waiting for her vanilla latte, came to Starbucks with a girlfriend. "I don't actually like coffee, but my friend invited me. It's a good place to chat with friends," she said.

At one table, water-utility employee Wan, 26, surfed social media on his smartphone while killing time until an appointment. His $5.20 vanilla latte was a bit pricey, "but it's OK because I can sit here for a while," he said. And if Starbucks weren't here? "Then I'd be sitting at KFC next door."

The customers inside Starbucks are already converts. One challenge for Starbucks is to persuade those outside the store to come in and try its -- by Nanchang standards -- exotic and expensive offerings. One passer-by spotted the Starbucks sign and asked: "What is this place? A Western restaurant?" and walked away.

Or take the government minder who was tailing this Ad Age reporter in Nanchang. Fu Xiaobin frequently talks business in teahouses where private rooms cost upwards of $200. This was his first Starbucks experience and his opinions reflect how difficult it can be to grow the target demographic beyond young urbanites.

Local food reporter Fan Yuan, who was broadcasting live from the store, pointed out another major challenge for Starbucks in China: its takeout business is minuscule. The vast majority of people go for the experience of hanging out at Starbucks.

"There's definitely some people in Nanchang who have a habit of drinking coffee every day, but they're really a minority," she said. "People want to sit here and relax. There will probably be some takeout orders, but really, it doesn't work in this market."

Mr. French, the analyst, joked that Starbucks would make more money if it gave away free coffee and charged customers by the hour to sit in its stores.

Starbucks also has room to grow its food selections. Although the company has created products tailored to Asian preferences, such as its black sesame green-tea cake roll, local competitors are more creative, offering hot meals such as curry and pasta. Others sell dessert plates with six mini egg tarts or other sweets, designed for the group dynamic.

"That's perfect for Chinese because they like to put a plate in the middle to share. Westerners just want a big fat muffin each," Mr. French said.

Starbucks' image as a trendy and modern brand helps mask the bigger question: whether Chinese will ever actually like coffee, something often described as "too bitter" to enjoy. Starbucks' R&D center in Shanghai has responded to that concern by developing popular fruity drinks such as Strawberry Soy Frappuccino and the Refresha line of juice beverages.

Jiang Shan, 28, is an aspiring restaurateur who spends eight hours a day, every day, at the Nanchang Starbucks. He is actually a coffee connoisseur from working in Western restaurants in bigger cities.

"I look around," he said, cradling a venti Americano, "and everyone in here is having some sort of icy concoction. I think I'm the only person with an actual coffee."

HOW TO RUN A COFFEE SHOP
Consumer insights for Starbucks in China: