Why China's Gymnastics Prince Will Laugh at Spain's Court Jesters
READ THIS NEXT
How restaurant chains are duking it out to be the best in their categories
David Wolf
Credit:

Li Ning has been almost unanimously crowned the king of the Olympic ambush marketers, but in one case, the Chinese sportswear company's efforts appear to have publicly backfired. A promotional photo of the Spanish Olympic basketball team ahowed the players, in uniforms sponsored by Li Ning, posing with their eyes narrowed in a caricature of Chinese facial characteristics, was run on Monday by Sid Lowe of the Guardian in the U.K.

The photo created something of an uproar, which ultimately prompted the Chinese embassy in Madrid to issue a statement declaring the ads "ni racista, ni ofensivo" ("Neither racist nor offensive," if my rusty Spanish still serves). Also, the ad was created by another sponsor of the basketball team, a Spanish courier company called Seur, not by Li Ning.

That is the official line, at any rate. For many Chinese, however, that's not good enough. I've heard and read some very unflattering things about Spain in the last few days, some going so far as to lambaste the country for everything from its racial-epithet hurling soccer fans to the horrors of the Inquisition.

One popular website in China questioned how long the relationship between Li Ning and the Spanish basketball team will last after all of this.

I think the relationship between Li Ning and the team will last for some time, and well it should. Here's why.

First, while Li Ning remains focused on matching and hopefully beating Nike and Adidas at home, the company is in the early stages of planning its long-term global expansion efforts. Spain is clearly one place where an incursion into the European market can begin.

Withdrawing much-needed support because of what most Spanish see as a harmless, well-intentioned goof is going to damage Li Ning's reputation in Spain and possibly Europe.

Laughing it off, on the other hand, makes Li Ning look cool and locally attuned in Spain. That's good branding, and therefore a good strategy.

The second reason is Li Ning himself. Despite being a 45-year-old Chinese businessman, Li Ning has a rich sense of humor and a large soft-spot for athletes of any flag. I bet he'll laugh it off, and so will the company.

Li Ning has long-standing ties with Spain, driven (I believe) by his friendship with and deep respect for former IOC president Juan Antonio Samaranch.

Samaranch was Spain's minister of sport for years and it's not hard to see where the association was made. The company signed an agreement to sponsor Spanish teams in 2002. The deal was renewed Aug. 6 of this year and will last through 2012. As a matter of personal honor, I doubt that agreement would be abrogated, either in letter or spirit.

Finally, this whole tempest is likely to blow over as the online world finds something more substantive to talk about.

Both China and Li Ning know a nonissue when they see it, and cooler heads will keep the ties intact. 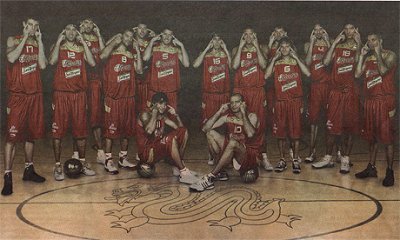