French Cosmetics Giant Was Led Online By a Poem, Says L'Oreal China VP Philippe Lamy
READ THIS NEXT
How restaurant chains are duking it out to be the best in their categories

SHANGHAI (AdAgeChina.com) -- China's internet community is so large and vocal that even luxury brands have set up camp in digital territory.

L'Oreal has developed several social media assets to find its luxury voice online, catering to the wide spectrum of Chinese net users -- and for very good reasons. The country's total internet population has topped 368 million, including 221 million who access or update blogs, 117 million who read and write messages on bulletin board sites (BBS) and 176 million fans of local social networking sites like Kaixin.com and Renren.com. 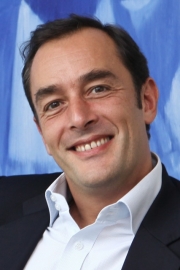 Yes, China's social media landscape is alive and well behind the so-called great firewall, but it is a quite different landscape than you'd find in the West. There's no Twitter or Facebook or YouTube, although China does have a wide variety of other social media properties competing for netizen engagement.

Although L'Oreal remains a major player in China's traditional media market, it has created China-specific sites of its own as well. We have four institutional brand sites, for Shu Uemura, Giorgio Armani, Yue Sai and Helena Rubinstein. Lancome's e-community site, Lancome Rosebeauty, is now the third-largest beauty BBS in China and Lancome's e-commerce site is one of Lancome's biggest point-of-sale venues, reaching over 1,000 cities. Our Biotherm brand also has e-community and e-commerce sites.

Building an online presence has taken time. In November 2006, L'Oreal maintained a handful of passive brand sites that the company retrospectively describes as "online museums."

Our digital strategy radically changed in November 2007 -- because of a poem.

The poem, written by a fan of Rosebeauty, described how the product "enriched her life and made it more beautiful."

Initially, we were stunned that someone felt such a special connection to one of our products, but we weren't sure exactly what we should do with this information. We decided that at the very least we should find out who this girl was and why she felt such affection for our products and reward her. But when we went to look for her she had disappeared from the internet without leaving a trace.

After this initial setback, we created a campaign utilizing a Chinese netizens' propensity for crowd-sourcing, where web users collaborate online to find a particular person or uncover a certain piece of information.

Over 100,000 netizens took part, thirty times more than the number of register users on the www.lancome.com.cn site at that time, took part in helping us successfully find Cherry, the young women who wrote the original poem.

The overwhelming success of this campaign helped us realize that listening to what was being said by our consumers, and combining it with our own information, insights and ideation in our marketing communications, would allow us to effectively engage with these users.

Turning online has emerged as a great strategy for L'Oreal. Our target audience -- women earning more than $1,465 per month -- now spend more time per day surfing online than watching TV, so we decided to re-focus the majority of our marketing efforts online and specifically on social media.

Rosebeauty was followed by an Olympic campaign for the Lanc?me brand that signed up 200,000 registrants, a Magnifique campaign that drew 300,000 women, a Valentine's Day promotion for Magnifique on Kaixin in which two million gifts were sent, and other promotions.

Traffic on the Rosebeauty e-community is indirectly funneled there from our campaigns and events, but once there, consumers are encouraged to stay by the site's relevant beauty content and rewards for staying on the site and contributing to it. We also ask brand advocates to spread awareness of our brands on other sites.

Has it worked? Yes. Rosebeauty is now one of China's top online beauty forums in terms of buzz, according to CIC, which tracks our social media impact and gives strategic advice. In the last year and a half, online mentions of the Lanc?me brand have risen from 5,000 to 50,000 a month (a number almost directly related to the rise in popularity of the Rosebeauty e-community) and the Lanc?me e-commerce site is now one of the brand's largest points-of-sale.

Online campaigns continue to be a great way to connect with more netizens interested in our products, but after three years of working in the social space, we've started to realize modern consumers don't necessarily trust what we say in blind faith. They will always review the product, often by checking with online peers.

Brands can use online campaigns to assess their legitimacy, because internet information flows from person-to-person, and to facilitate conversations on the web. But ultimately, marketers need to let consumers take over.

Philippe Lamy is VP of L'Oreal's luxury division in China, based in Shanghai.

Philippe Lamy
View all articles by this author