Agency Wolfgang was behind this EV beast called 'Thundertruck'

During the pandemic, many of us found ample hours to explore hobbies such as puzzling, biking or baking bread. Meanwhile, L.A.-based agency Wolfgang used its downtime to create a new car.

At the tail end of last year, the Stagwell-backed shop unveiled Thundertruck, a monster of a multi-purpose concept EV that looks straight out of Cybertron, beefy and full of sharp angles that suggest it may transform into a massive robot at any moment. 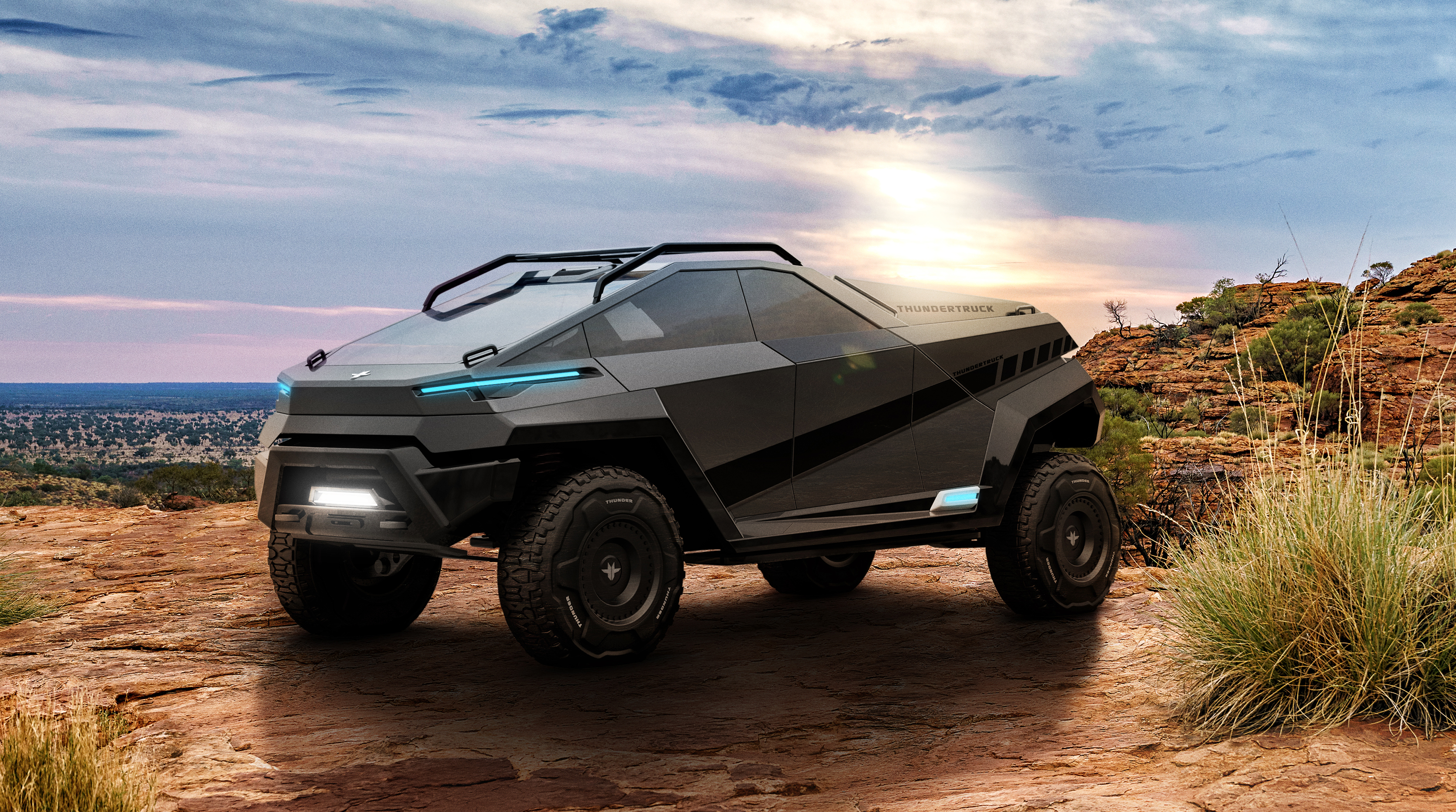 Fighting off intergalactic enemies isn’t on its credentials list, unfortunately, but it still promises a whole lot: it’s planet-friendly, boasts 800 horsepower, 0 to 60 acceleration in 3.5 seconds and a range extender that takes the car up to 560 miles—while also converting it into a massive 6x6. 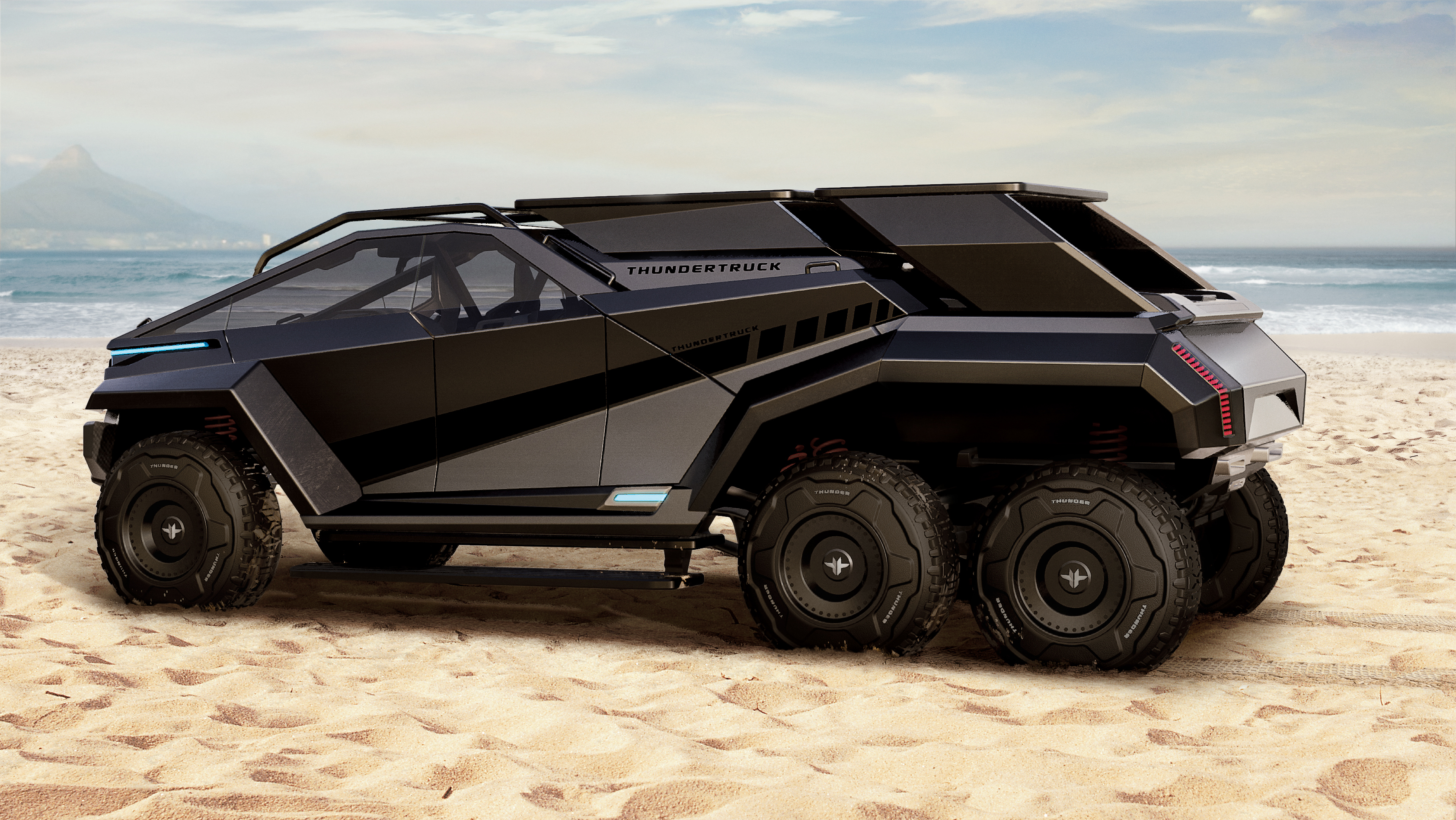 It also has a distinctive, expansive “Bat Wing” awning equipped with flexible solar fabric to bring more juice to the battery while providing plenty of shade to passengers once they’ve parked in the desert, beach, or mountainside. They’re free to camp out there too, under cover of the truck’s integrated tent.

The arrival of Thundertruck coincides with the official launch of Wolfgang’s IP division. The agency, which has created campaigns for brands including Adidas, Georgia-Pacific and Panda Express, was founded five years ago by industry vets Colin Jeffery, chief creative officer; Mike Geiger, chief executive officer and Seema Miller, president and chief strategy officer, who previously worked together at David & Goliath. Together, the trio boast decades of experience in automotive, having worked on major brands including Kia, Chevrolet, Volkswagen, Toyota, Lexus, BMW, Hyundai and Land Rover, at agencies around the globe.

Thundertruck was born out of discussions on how to work in the category again at their new shop.

“We talked about, from day one, how do we get back into the auto space given our background?” Jeffery said.  “When we first opened, we assumed we’d just pick up automotive work because we’ve done it probably more than anyone and could go toe-to-toe with the big shops, but a lot of these automotive accounts are all locked into these multi-year holding company deals.”

At the same time, Wolfgang, which also bills itself as a consultancy, had long been angling to dive into its own IP. “We don’t always have to do advertising,” said Geiger. “We can partner with the right people to create products if we want to.”

Agencies developing their own IP and products is nothing new. Premium cannabis brand Dosist and personal care brand Eos were born at Anomaly, while Tequila Avion emerged from the halls of Walton Isaacson.

But Thundertruck is the first big agency idea we’ve seen in the automotive space.

Wolfgang created Thundertruck over a span of two years, collaborating with a team of design and automotive engineering experts, who themselves also had time to spare as COVID raged on. The creators were very intentional with their design, hoping to push not just themselves but the auto industry at large.

They zeroed in on EV trucks after their research found that among the 30 new EVs in various stages of production slated for launch in the next two years, very few of those are pickup trucks—and those trucks looked, frankly, pretty boring. 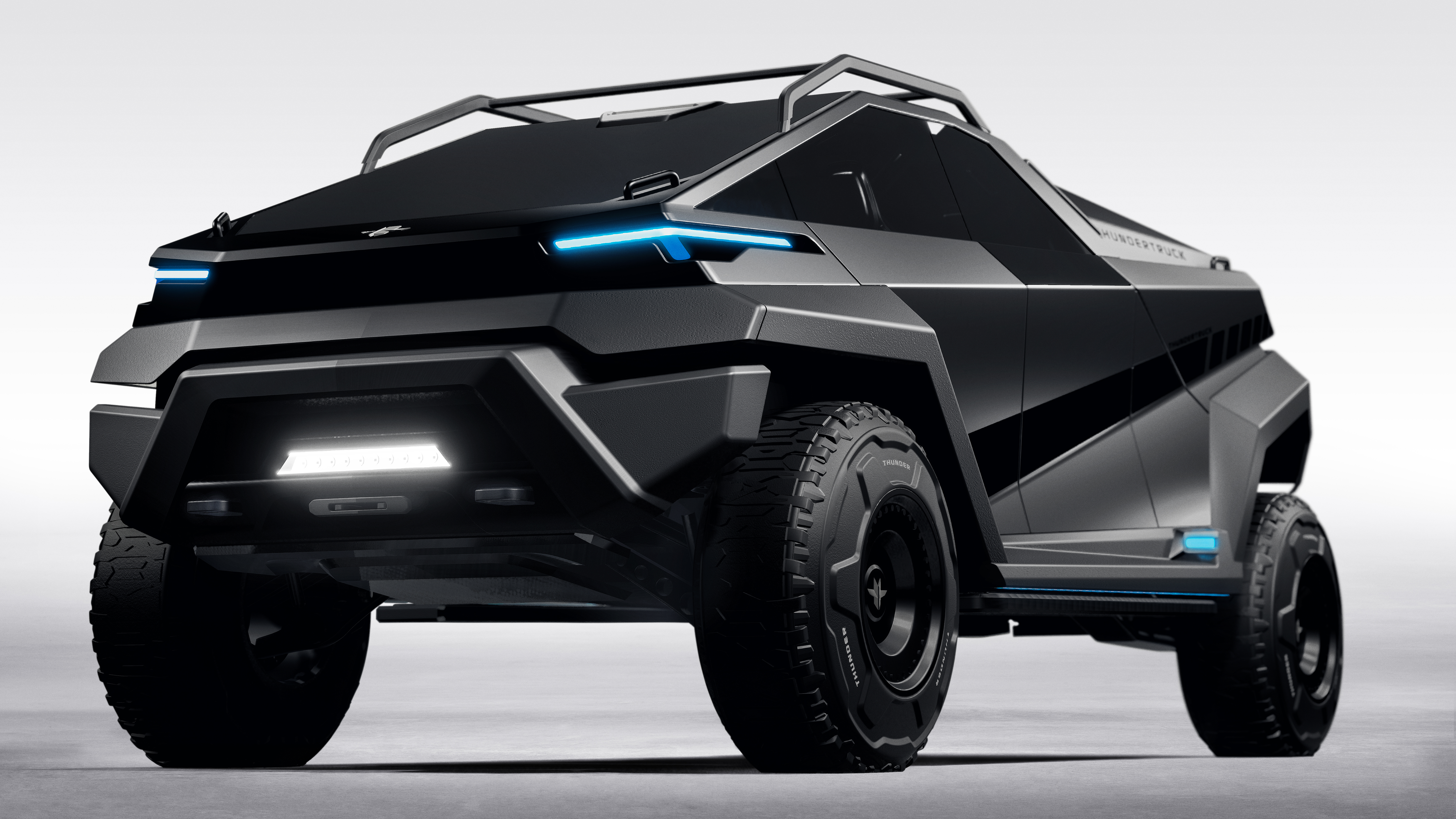 We “really [want to] challenge E.V. designers to up their game, because right now, the designs are pretty uninspired,” Jeffrey said.

Rivian’s model, for example, “looks like a conventional truck,” Jeffery said. “It just happens to be electronic. But a truck doesn't have to look like a truck anymore. There’s no need for them to look like ‘cars’  because they have no engine.” 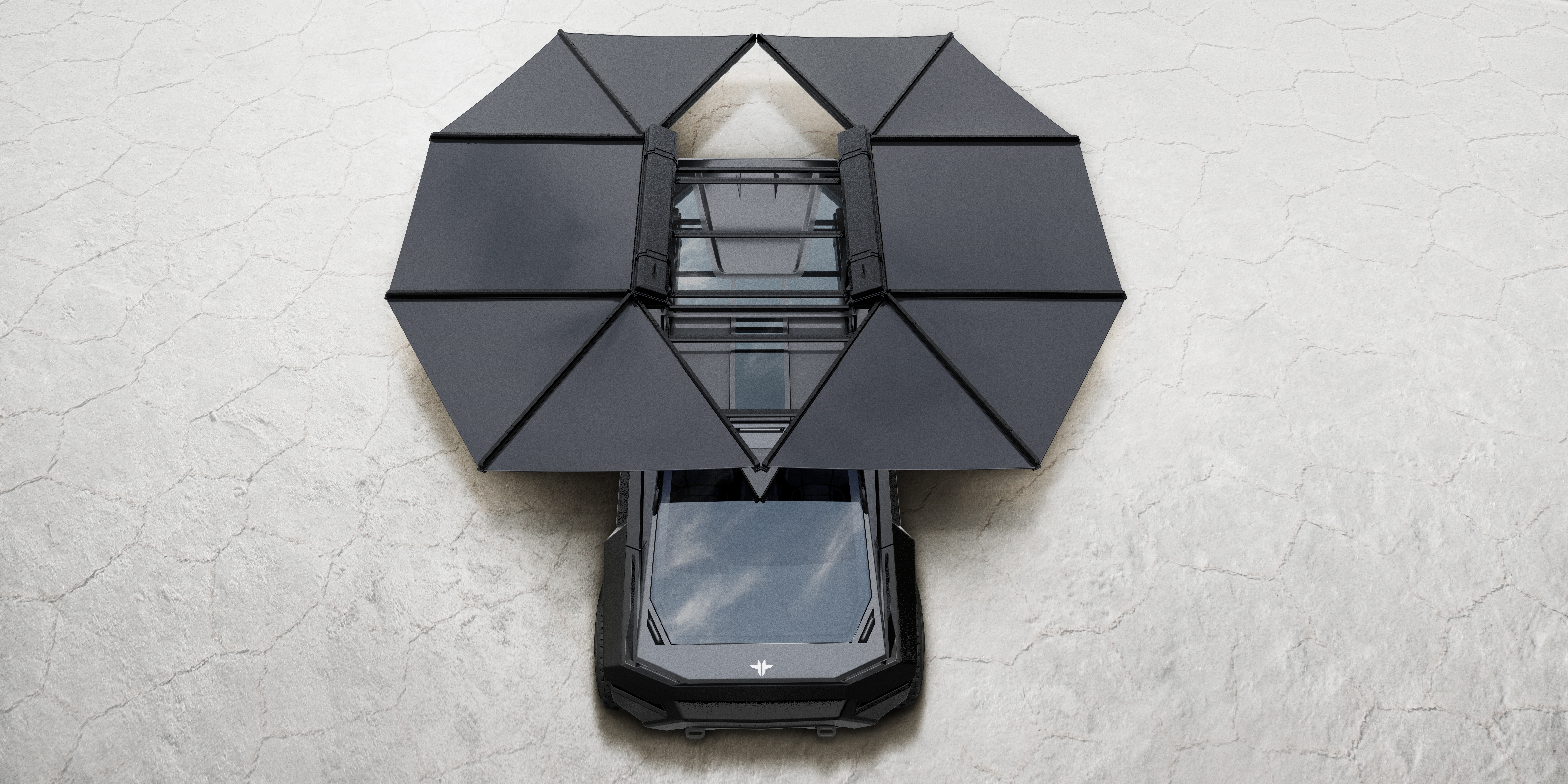 Tesla’s Cybertruck, which also boasts an angular body, was admittedly an inspiration, but Thundertruck puts such stylings on steroids. “It’s purposely designed to look very futuristic, but it helps from a manufacturing standpoint,” said Jeffery. “It’s a flat-slab design, not a lot of creases in the sheet metal, which is actually easier to do” versus vehicles with “a lot of curves and seams.”

Most cars have a hood and a tail. Thundertruck has neither, allowing it to breeze through turns difficult for its traditional counterparts. There are also a lot of “firsts” in the design. The batwing awning is proprietary and the agency also has a patent pending on the range extender.

Along with the product, Wolfgang even created a marketing campaign for Thundertruck, positioning it as the vehicle “Made for Outsiders.” 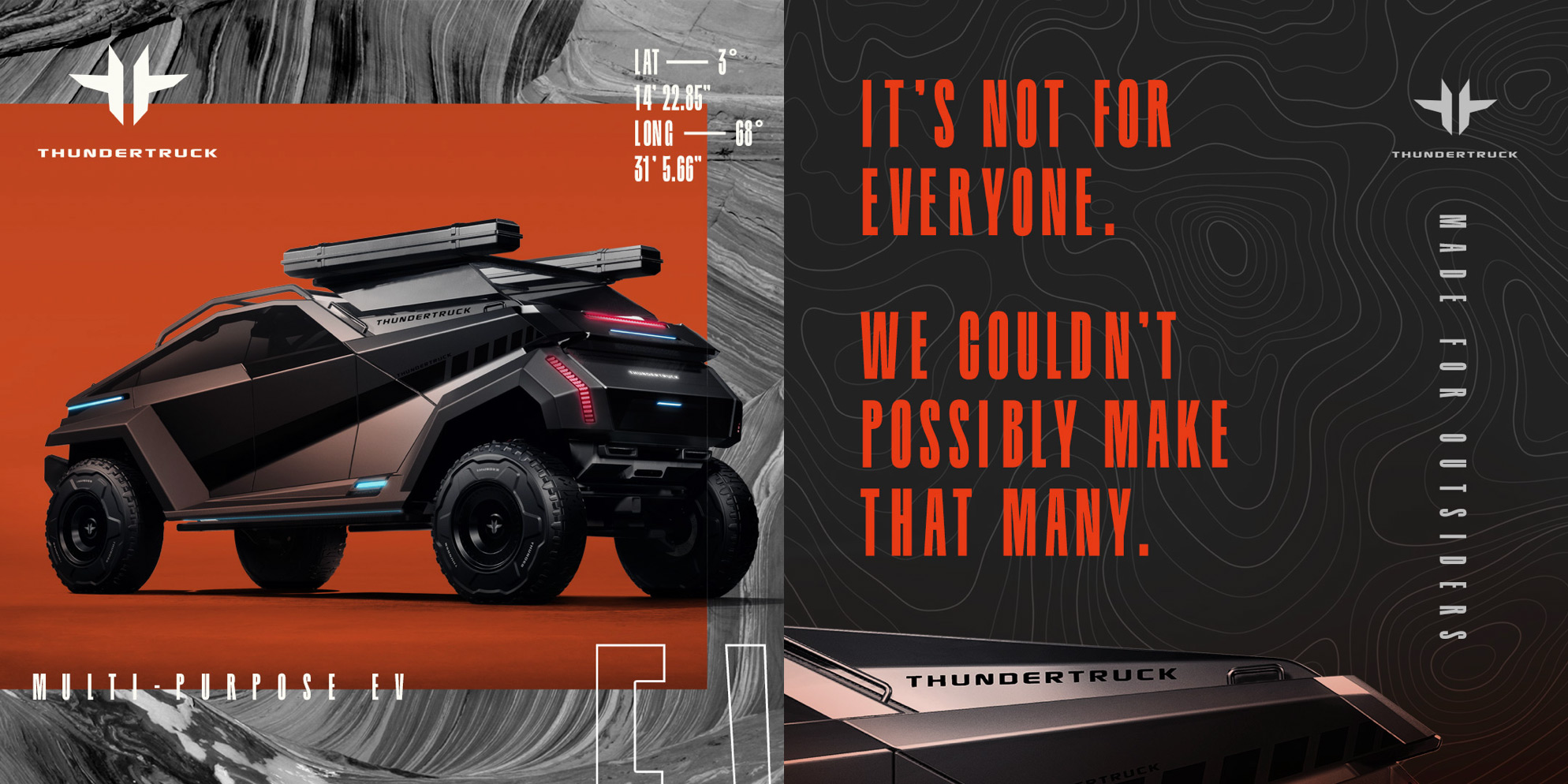 Doing so was meant to help attract interest from investors. “The competitors in the space, they might have this cool product, but they don't they have a voice,” Jeffery said. Investors would be “buying this whole ecosystem that's set up and already working.”

When the agency unveiled the idea around Christmas last year, it got plenty of attention from the automotive press and blogs. Now, Geiger said he gets about 100 emails a day, the majority of which are inquiries about purchase and price, with a handful from potential investors from mainly Russia and Europe. Next steps are getting it to prototype phase and the agency is in talks with a potential production partner.

If anything, Thundertruck provided a wide-open field for Wolfgang and its automotive collaborators to play creatively when COVID put work and even some of their careers on hold. Jeffery said that some of the car designers and developers on the project, who were not working during the pandemic, are now back on the job at some of what would be Thundertruck’s competitors.

“At the very least, it’s a great case study,” Jeffery said. “It shows the potential of what we as an industry can actually do. It could be a really powerful tool for us as we look for new revenue streams and ways to flex creatively.” 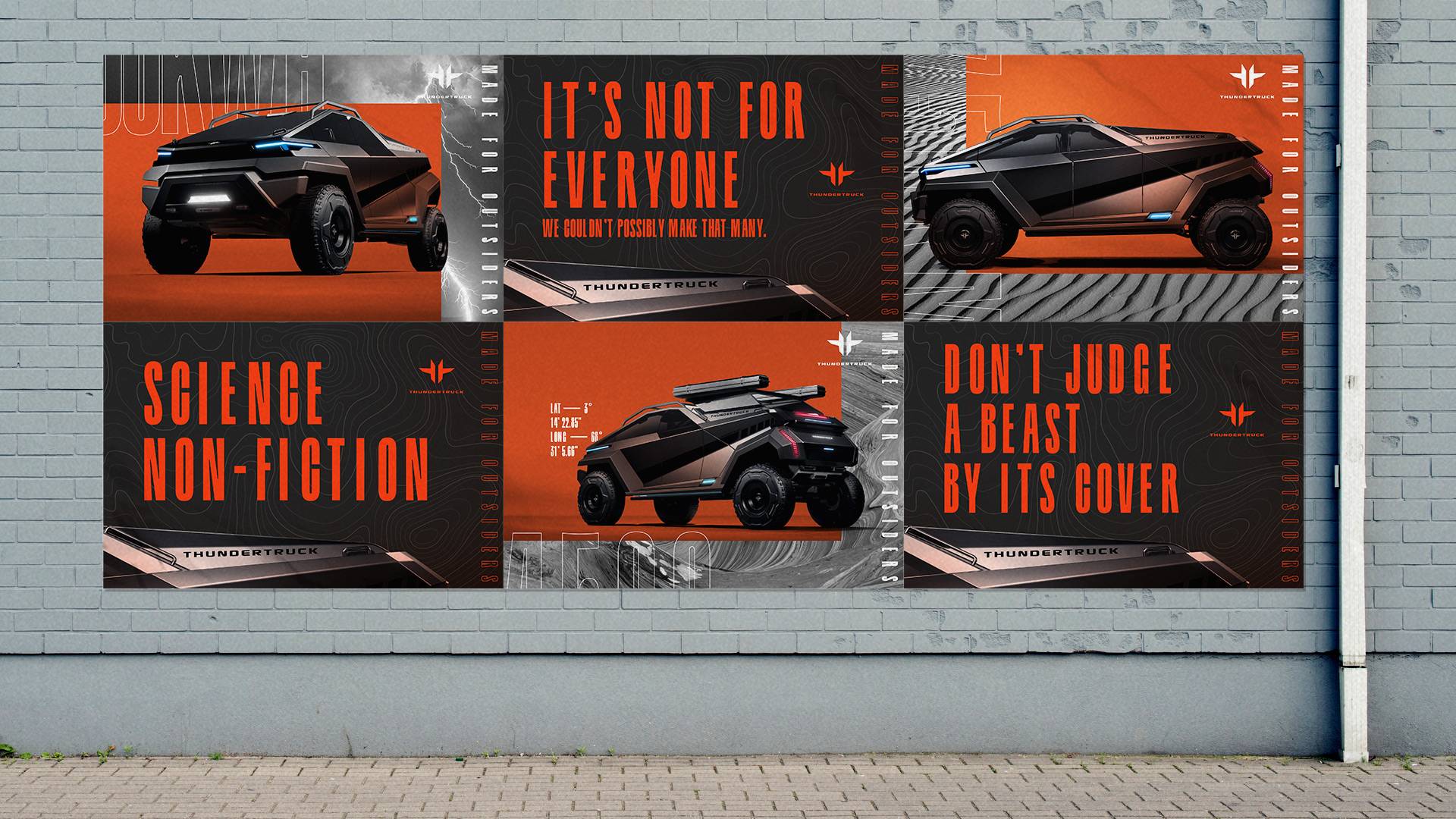