Campaign portrays Capitol insurrectionists as Black one year after the riot

Goodby Silverstein & Partners is launching a campaign on the one-year anniversary of the day that insurrectionists stormed the U.S. Capitol, flipping the script on that polarizing moment in history and posing the question: “What if they were Black?”

Subscribe to Ad Age for the latest in advertising and marketing news.

The campaign, budgeted at less than $50,000, was created on behalf of Courageous Conversation Global Foundation, an organization dedicated to improving racial equity in the country. The campaign is focused on a limited collection of airbrush-style memorial shirts, created by artists Timothy Bluitt Jr. and Cassandra Burrell, that reimagine several white rioters present on Jan. 6, 2021 as Black. 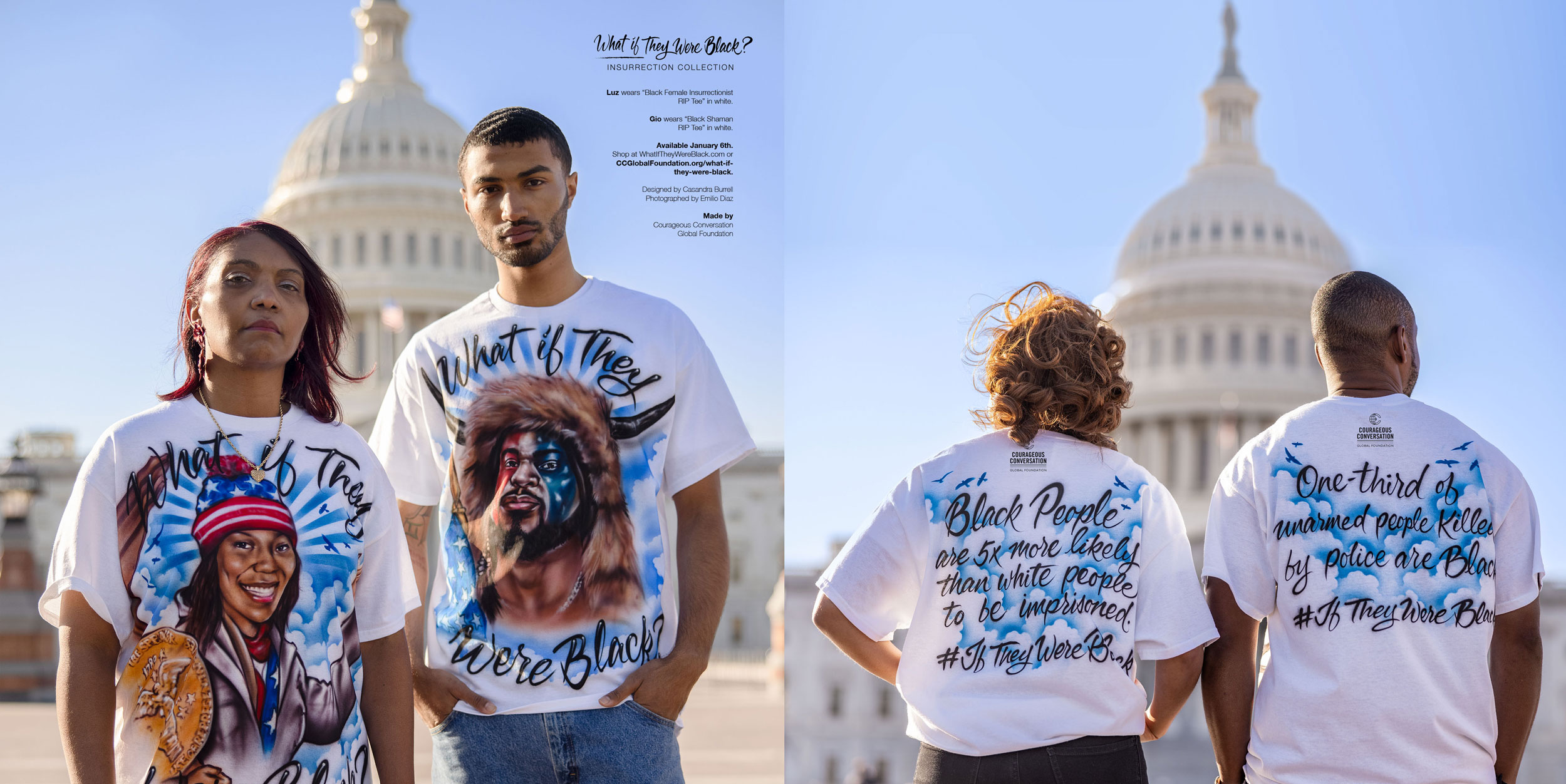 The shirts will debut through a catalog-style Instagram campaign that features them being worn around the Capitol and throughout Washington D.C. The images will encourage people to purchase shirts or hoodies, which retail at $37 and $38 respectively, through a website created for the campaign. A portion of the proceeds will go to the fund.

According to Anthony O’Neill, creative director at GS&P, the goal is to create a conversation with as many people as possible.

“When we started working on this thing, no one had been charged,” O’Neill said. “The stats on the back of the shirts really force the point we're trying to make. We're not just saying if they were Black they'd be dead. We're saying even with a routine traffic stop, for example, there are two Americas. I think wherever you were on that day, you probably asked the question in the back of your mind, ‘What if they were Black?’ and hopefully that creates a conversation.”

The Black people shown on the clothes don’t share a physical likeness with the rioters that are referenced, but the pieces use context clues to help the audience discern who they are being compared to.

One shirt showcases a Black person dressed as Jacob Chansley, who was one of the main faces of the riot, sporting red, white and blue paint on his face along with a fur hat with horns. In November, Chansley, who called himself the “QAnon Shaman,” was sentenced to 41 months in prison for the role he played in the event.

Without mentioning Chansley by name, one of the social media images addresses him. The image includes a statement that reads: “After rioters broke into the U.S. Capitol on January 6, 2021, some entered the Senate floor—one of whom, dressed as a Viking, did so while carrying a speared flagpole, which many saw as a weapon. For his actions, he’s been sentenced to only 41 months in prison after pleading guilty on just one felony count—essentially, a slap on the wrist. If he were Black, would he have been shot before he made it to the Capitol steps?” 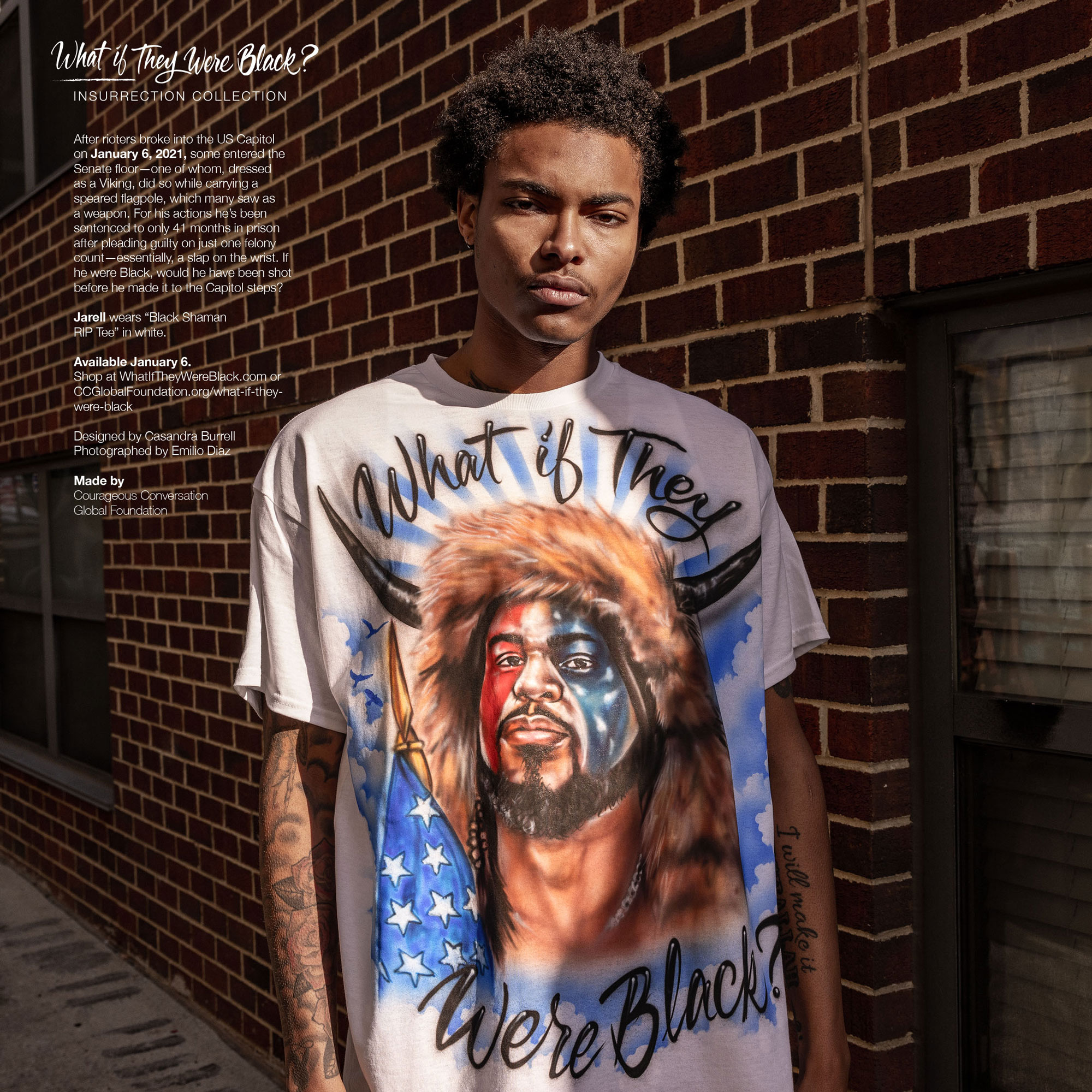 It was important to have the artwork displayed on shirts—some of which are referred to as "RIP shirts"—since it is a typical medium used for mourning in the Black community, said Wes Dorsainvil, associate creative director at GS&P.

“The question itself is thought-provoking,” Dorsainvil said. “As a team, we all had that same moment of reflecting on that question and how we communicate our emotions and reactions. The T-shirts just came from discussions about ways that as the Black community, we express a lot of the things we experience through art and language. The T-shirt and the RIP motif came out of a discussion about how do we mourn people who died.”

The campaign will also feature a TikTok series titled #IfTheyWereBlackChallenge, in which TikTok creators detail what would have happened if Black people had stormed the Capitol, using the popular heaven background green-screen feature. Additional social content includes a live Twitter Spaces conversation and an Instagram AMA to spark conversation around the question “What if they were Black” and the bias that the world witnessed.

Subscribe to Ad Age for the latest in advertising and marketing news.

This isn’t the first work the agency has created for Courageous Conversation Global Foundation. In February 2020, the agency launched its “Not a Gun” campaign, which was an effort that illustrated the unfair difference in how a white person and Black person could be perceived in an everyday situation, leading to dire life-altering consequences for the latter. On Juneteenth of 2020, the agency launched its “ Being Black is Not a Crime” campaign for the group and in July of this year the agency created its “400 Years Flag Half-Staff” campaign dedicated to passing the Emmett Till Anti-Lynching Act.

Courageous Conversation Global Foundation: This flag at half-staff calls out the hypocrisy of July 4th

Courageous Conversation Global Foundation: These election signs urge you to vote for Breonna Taylor, George Floyd and others