Coltrane Curtis on investing in the future of Black women entrepreneurs

This week we are honored to continue our Black History Month series celebrating creative excellence with Guest Editor Coltrane Curtis, founder and managing partner of Team Epiphany. Team Epiphany is a family-owned, culture-first marketing agency and a recent honoree at Ad Age's Small Agency Awards. In its sixteen years, the company has worked to position brands at the heart of culture. Its client list includes Audi, American Express, Airbnb, Coca-Cola, Footlocker, Glenfiddich, Hendrick’s Gin and more. 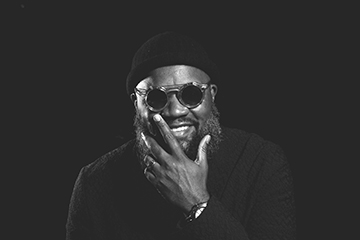 Born in Brooklyn and educated at Atlanta’s Morehouse College, Coltrane made many notable stops before founding his company. He had been the first employee at Ecko Unlimited, rising the ranks to become VP-marketing for Marc Ecko Enterprises, all while serving as editor at Complex Magazine. He partnered with 50 Cent to create the G-Unit fashion brand and went on to become MTV’s first “Style VJ.”

Growing up in my dad’s marketing agency in Brooklyn, I learned a plethora of invaluable lessons that I’ve used throughout my lifetime from entrepreneurial skills to how to operate and succeed in corporate America. Two of the lessons that I learned are just as relevant now as they were during my adolescence: No. 1—you can’t activate a community you don’t actively belong to. No. 2—when you take something off the “cultural” shelf, put something back of equal or greater value.

When I started Team Epiphany nearly two decades ago, I knew I wanted to create an agency that is reflective of the diverse environment and community that I belong to. That outcome has been tremendous: 75 employees, a Black founder and managing partner, a Chinese-American managing partner, four out of six VPs are women and people of color, 70% People of Color, 35% Black, and 65% women.

The goal wasn’t to have diversity for the sake of diversity. No, it was so that the agency would create work that went beyond the scope of the campaign that was based on real-world insights that actually impacted the communities that we belonged to. This only works when you have amazing clients that don’t just want to borrow voices for the sake of a trend but want to have a lasting effect and impact on the communities they are activating

Prior to the pandemic, Black-women-owned businesses were growing at unprecedented rates as the fastest rising entrepreneur group in America (according to the State of Women-Owned Business Report). Still, today, Black women entrepreneurs are making less revenue than their counterparts and still do not have equal access to the resources they need to grow and be successful.

That’s why we co-created the “Amex 100 for 100” program with our client American Express. American Express committed $2.5M in 2021 to invest in the future of Black women entrepreneurs in the U.S. The program provides each of the entrepreneurs with grants of $25,000 and 100 days of business resources including business education, mentorship, marketing, virtual networking, WorkSpaces by Hilton Hotel reservation credits, and more. They partnered with IFundWomen to help identify female entrepreneurs of African descent as they work to jump-start and grow their business ventures. The initiative is part of American Express’ $1 billion action plan to enhance diverse representation and promote equal opportunities for their colleagues, customers and communities.

In addition to “100 for 100,” Team Epiphany worked with American Express to launch “Built to Last,” a new vodcast (video and podcast) series that features in-depth interviews with Black-owned small business owners who are thriving despite the challenges they face. Hosted by New York Times best-selling author Elaine Welteroth, each episode honors the trailblazing Black entrepreneurs that paved the way for the small business leaders of today. These conversations uncover and celebrate the stories, past and present, of Black entrepreneurship in America, inspiring listeners to support Black-owned small businesses in their communities.

While the industry is obsessed with KPIs, impression numbers, and a variety of other metrics and data sets that provide questionable value, how do you measure the impact of opportunity? How do you measure the impact a campaign has on its partners and consumers once you’ve submitted your recap deck, key learnings, and analytics? For us, these campaigns go beyond quantitative numbers with their impact on our community. It’s one of the many examples of why I started the agency and why I’ll keep fighting for more projects like this and more seats at the table.

American Express: Amex's first work out of McGarryBowen speaks to those living the 'hybrid life'