Michael C. Hall lends his voice to the driving app to promote 'Dexter: New Blood' and the comeback of the serial killer antihero

In 2006, Showtime debuted the first episode of “Dexter.” Starring Michael C. Hall in the title role, the darkly comedic series followed forensic technician Dexter Morgan as he helped Miami police solve some of the city’s worst crimes—while he stealthily committed heinous acts of his own as a do-good serial killer who murdered bad guys. The show went on to run for eight seasons, airing its final episode in 2013.

This past weekend, however, saw the return of the character in a new, limited-run series, “Dexter: New Blood,” in which we find Morgan with a new name, Jim Lindsay, in a new environment (Iron Lake, New York) and an urge to kill once again. To promote it, Showtime debuted an integrated marketing push with some clever elements that bring fans further into the character’s world. 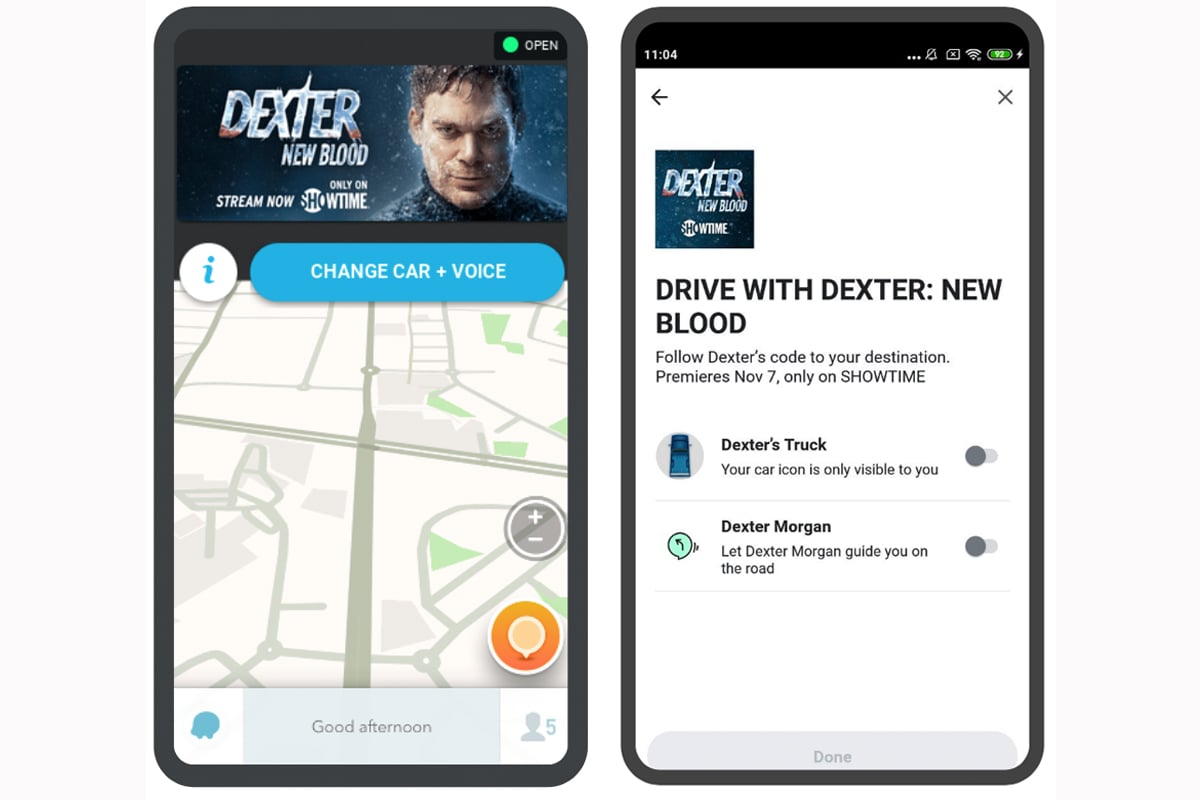 The most entertaining of these is a Waze Integration that turns Dexter into your own “Dark Passenger.” That’s the character's pet name for his irresistible urge to kill, but on Waze, the “Dark Passenger’ is here to help you navigate through your city’s gridlock—perhaps in an effort to keep your own murderous road rage in check.

The Waze experience consists of various prompts voiced by Hall. More than three dozen of these are the expected directional commands you’d find on the app (such as “exit right,” “police reported ahead,” and “make a u-turn”), but the experience also includes 18 custom prompts that extend the show's story all the way to your ride. Scripted by “Dexter: New Blood” writers Alexandra Franklin and Mark Muszynski, they include Hall reading lines such as “You just opened a dangerous door. There’s no going back. Now drive,” “Tonight’s the night. And it’s going to happen again and again,” and “The code has always been my guide, and now, I’ll be yours.”

A brand tie-up with Amazon consisted of a takeover of the retailer’s homepage on premiere day. Through Black Friday and Cyber Monday, “Dexter: New Blood” boxes will grace customers’ doorsteps.

A partnership with Anheuser-Busch also integrated the show into the brand's Halloween campaign with alcohol delivery platform Drizly.

This month, all JetBlue flights will feature seatback takeovers featuring “Dexter: New Blood” messaging, and the day before Thanksgiving, the show will take over Accuweather with dynamic ads based on the weather in consumer’s respective locations.