Company reworks a holiday classic to promote its own offerings

Frito-Lay is putting a winter spin on an iconic song to remind people to stock up on snacks for the hundreds of millions of holiday gatherings that will happen before the Super Bowl.

“My Favorite Things” from “The Sound of Music” has been transformed into a Christmas-meets-snacking tune sung by actress Anna Kendrick. The campaign is the biggest effort yet from Frito-Lay North America’s in-house creative team.

The lyrics of the Rodgers and Hammerstein classic were rewritten to include lines about Cheetos, Doritos, Lay’s, Smartfood popcorn, Tostitos, salsa and queso, as well as holiday-season traditions such as gingerbread houses, ugly sweaters and secret Santa.

“It’s a beloved song, so we didn’t want to do something that upset people that love the song,” says Chris Bellinger, VP of creative and digital at Frito-Lay North America, who oversees the PepsiCo Inc. unit’s in-house creative team. 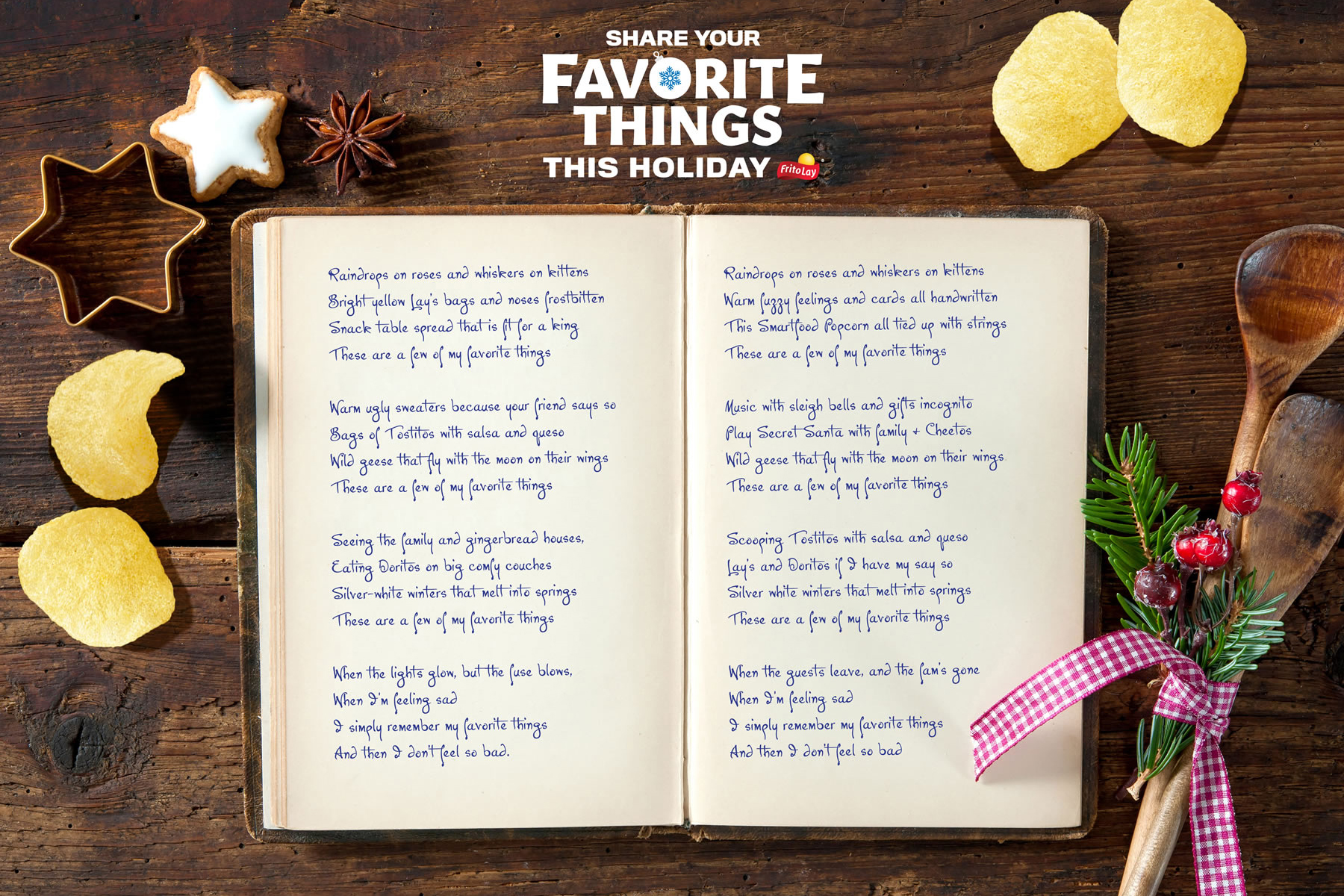 A Frito-Lay employee was recorded singing the snack-filled tune when the team was tinkering with it but the part was kind of written with Kendrick and her personality in mind, says Bellinger. “She was our first choice,” he says.

As it turned out, the actress is a fan of Cheetos Puffs and other salty snacks, and enjoys gathering with her family in Maine for the holidays. What's more, she was available.

Kendrick sings the updated song in a two-minute video while wearing dresses in hues that could be described as Lay’s yellow and Doritos red, as well as a Lay’s ugly sweater and other winter gear. The actress, who describes the vibe of the spot as “winky,” says she added one idea that made the final cut.

“I think the only thing I pitched on the day was getting Cheetos dust on my mittens,” says Kendrick.

“We want to be a major player in this timeframe,” says Bellinger.

Frito-Lay says it sells nearly 100 pounds of snacks per second. And according to the company, Americans will take part in an estimated 327 million holiday gatherings between Thanksgiving and New Year’s, which presents a staggering number of chances to get salty snacks into people’s minds—and stomachs.

Kendrick, who stars in the Christmas movie “Noelle” on Disney+ and is currently shooting the HBO Max anthology series “Love Life,” is the central character and only singer in the spot.

Eagle-eyed viewers might also recognize actor Matty Cardapole, who has appeared in shows including “Stranger Things” and in commercials for products such as Skittles. One of the women is played by Teresa Dalquisht, who, along with her sisters, had a moment of Internet fame a few years back and a series called "Golden Sisters” on OWN.

A 90-second version of the “Favorite Things” commercial will air during the Macy’s Thanksgiving Day Parade. There’s also a 30-second cut plus plenty of content suited for Instagram, Facebook, Spotify and elsewhere.

Frito-Lay’s multi-snack holiday-themed push follows a spot that ran this spring and summer called “The Perfect Side of Summer” and featured Doritos, Lays and Tostitos together, along with brief shots of cans of sibling brand Pepsi.

Frito-Lay: Technology Is a 'Great Unifier'