Forget the Cliches: This Is the Real Britain, Say These Understated British Airways Films | Ad Age
Skip to main content

Forget the Cliches: This Is the Real Britain, Say These Understated British Airways Films

Spots Are Aimed at Visitors From India, China and the U.S.

Think of visiting Britain and you might think of the Queen, a double decker London bus or Big Ben. This campaign from British Aiways, done in collaboration with the U.K. tourist board VisitBritain, takes a different slant on life in the U.K.. However, the titles of the first two online ads -- aimed at visitors in India, China and the U.S. -- might lure you in thinking you're getting the cliches.

According to agency BBH, the campaign is based on the idea that "Britain is at its best when it's experienced, rather than observed," and the spots, directed by Stink's CD Morrish in a gently understated style, show Brits enjoying life in the country in very typical ways.

"High Tea," seen here, shows a father and his teenage son on a hike in the Lake District. The pair are going to drink their flask of tea on top of a peak, hence the title; the spot promotes flights to Manchester. "Red Bus," promoting flights to London, shows a group of young people having fun surfing in North Devon; the narrator drives a red minivan. Both spots end with the tagline "There's more to Britain with British Airways." 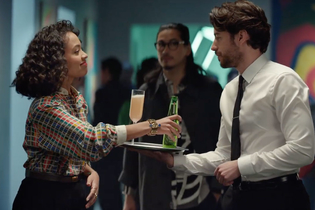