With the pandemic now several months in, the fallout remains palpable around the country. Once thriving metropolitan hubs are now littered with shuttered storefronts and boarded up windows. Outdoor advertising, too, has suffered—with various companies and local advertisers having little reason to showcase their offerings to streets void of pedestrians.

Media company JCDecaux has found a way to transform its unused inventory into uplifting messages designed to raise the spirits of city dwellers in a powerful outdoor campaign from Fred & Farid.

In Los Angeles, New York, Chicago and Boston, the agency has created city-specific posters that bring messages of hope to residents. In L.A., signs with vibrant gradients feature bold mantras such as:  “We. Are. L.A.,” “All Heart,” “Optimism is our superpower.” There are also Spanish-language versions, addressing the city’s nearly 50% Latino population (“Puro corazon,” “Somos magica”).

Fred & Farid’s New York office helped to develop its city's posters, with a palette inspired by NYC steel skyscrapers, brick walls and yellow taxis. The zig-zag typography mimics the fire escape ladders seen on the sides of its buildings, while copy speaks to the city’s fighting spirit: “We never sleep,” “Big Apple bites back.”

Chicago’s signs take cues from the city’s flag. They feature a red, white and blue palette and intersperse stars with typography. Messages include “We know how to break a curse” and “We’ve had tougher winters.”

The Boston versions play to the city’s sports-loving culture and feature green and white, with orange accents (a nod to a coach’s playbook), along with plenty of attitude: “We rise, we fight back, we shout (with an accent),” “Pretend COVID is the rival team. (Now fight!),” “When we root for the Red Sox, we root for each other.”

The campaign promotes the message that despite the adversity, “We keep going.” It comprises 150 posters in total, which are available for download on a dedicated website so individuals can spread the messages even further.

In creating the effort, Fred & Farid Los Angeles eschewed a traditional B-to-B approach for the client and instead, proposed an idea to help alleviate collective anxieties across the country while celebrating the resilience of its citizens. 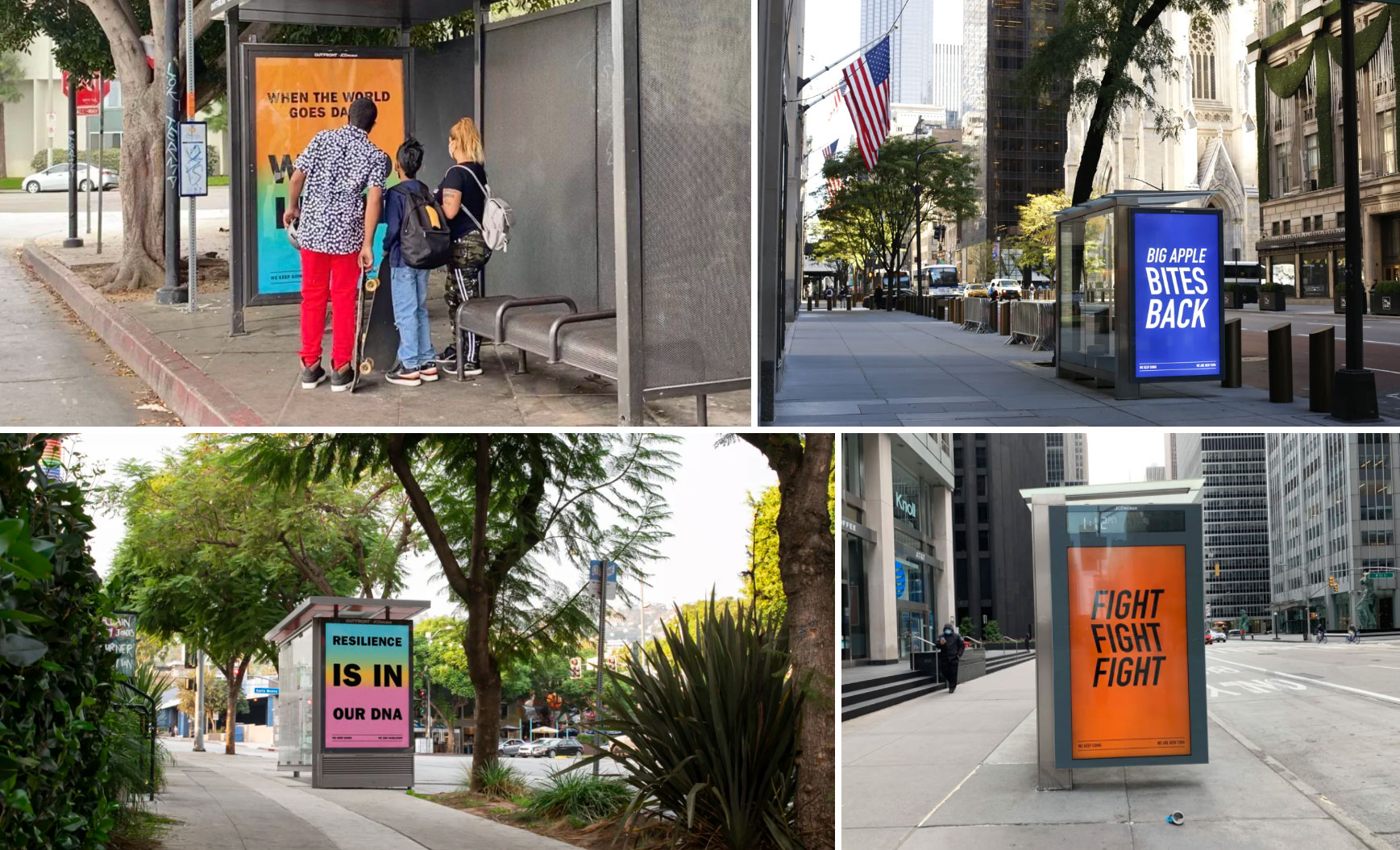 JCDecaux’s name is conspicuously absent from the posters—it’s only evident in the frames that enclose them.  “No big emotional statement. No hashtag or call-to-action. Just a fact: We keep going. Because that’s all we can do." said the agency’s founders Fred Raillard and Farid Mokart in a statement.

« Believe In LA » 💪⠀ ⠀ We keep rallying, smiling, believing, and fighting for a better day. All across America, We Keep Going. We created hopeful poster series for all the resilient folks in Los Angeles, New York, Chicago, and Boston. A total of 150 slogans on over 500 displays.⠀ ⠀ Print or share them on social media with #WeKeepGoing via the link in our bio! And look for the posters across every city, in the streets

“Despite coming from all around the world, we have a shared sense of pride in our hometowns,” added JC Decaux President and Co-CEO Jean-Luc Decaux. “We believe that we will overcome the challenges that have plagued us this past year, and will come out stronger and more resilient than ever before.”

The signs are displayed across JCDeceaux’s 500 displays in its Digital Network as well as on its static inventory in Los Angeles (via Outfront/JCDecaux).

Along with this campaign, we’ve seen others make the most of outdoor space gone unused. Over the summer, the World Out of Home organization created a wide-spanning effort showcasing the opportunities of a post-COVID world, while U.K. snack brand Emily’ Crisps created self-effacing ads that poked fun at the fact that nobody was going to see them.