As major restaurant chains including Popeyes, Burger King, McDonald’s, Chick-fil-A and KFC continue to duke it out in the chicken sandwich wars, a newer player in the U.S fast food scene is employing an unusual tactic to join the fray: a lawyer.

Jollibee, a Philippines-founded chain that arrived in the States in 1998, has a new campaign starring an attorney of the late-night-TV advertising, ambulance-chasing ilk who promises to get his clients “chicken sandwich justice.”

The new push from David & Goliath, which won the Jollibee creative account in March, centers on esquire Chris P. Poultry, who promotes himself as a champion of those disappointed by the world’s chicken sandwich offerings. He appears in a low-budget-style ad asking viewers, “Has your chicken sandwich been too dry, too bland or just plain joyless? Then you need a powerful chicken sandwich lawyer!”

Poultry goes on to promise viewers the chicken sandwich they deserve—the “crispy, juicy, tasty Chickenwich from Jollibee.” The minute-plus ad ends with a directive, sending viewers to ChickenSandwichLawyer.com, where they can sign up to get a free Jollibee Chickenwich. “If a chicken sandwich has failed to bring you joy, it’s time to take action,” the site reads.

The campaign continues the attorney theme in outdoor ads. A bench placement, for example, features a mugshot of Chris P. Poultry and his URL. Though there’s no product shot on that bench there's one on another bench immediately next to it in a more overt Jollibee ad. The restaurant is also placing Poultry’s business cards on car windshields and even ran an aerial banner over the beach in Los Angeles last week. 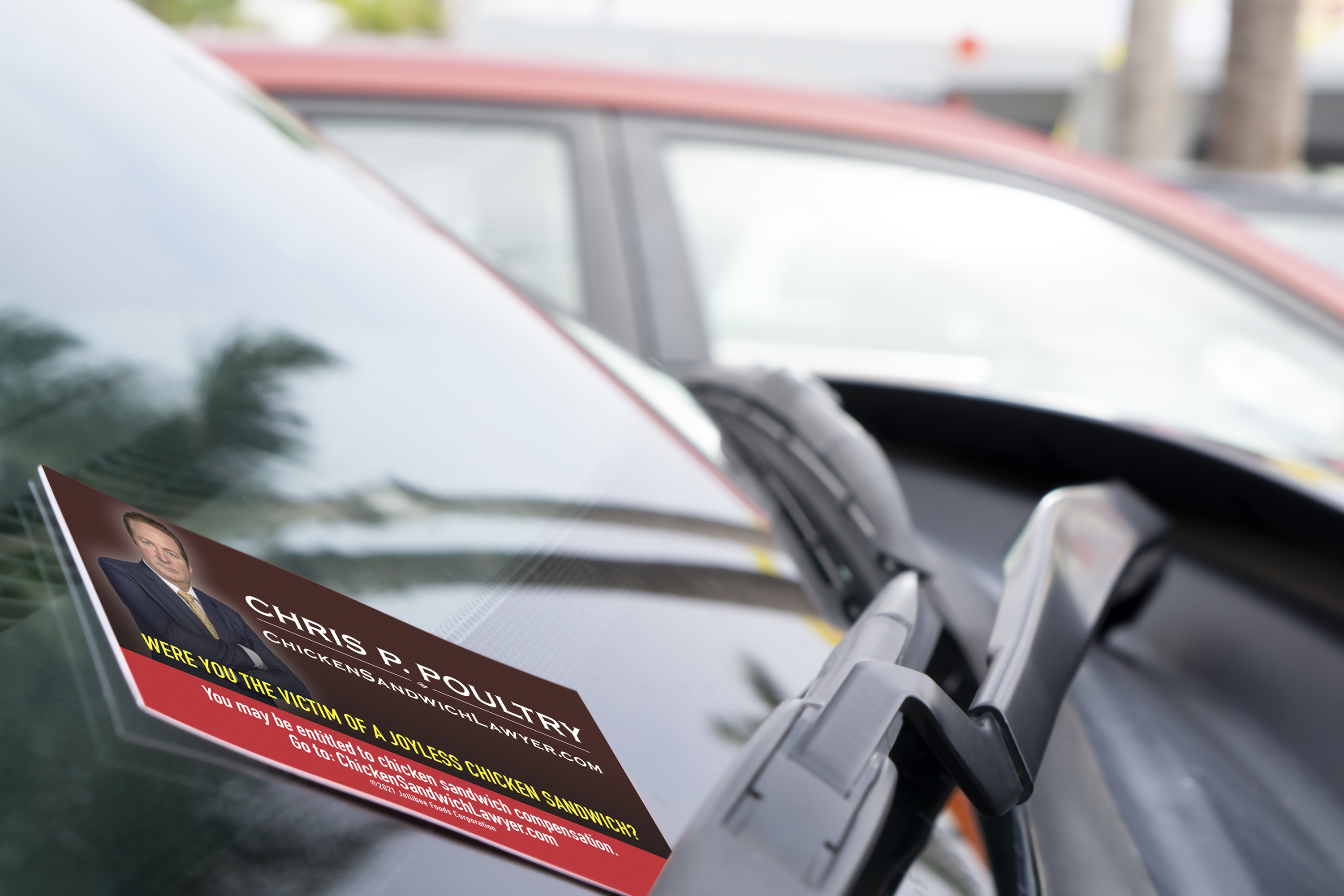 Jollibee's entry into the chicken sandwich wars seems destined. After all, its most famous product is Chickenjoy, hand-breaded fried chicken cooked in a secret marinade and served with a side of gravy. Still, it enters the fray well after other chains that have updated their chicken sandwich offerings following the debut of Popeyes chicken sandwich in 2019.

Luis Velasco, senior VP and head of marketing at Jollibee Foods Corporation North America, says the new Chickenwich and its campaign follow more than a year of research and pilot-testing.

“We centered our recipe around two key benefits that the consumer said they were looking for, which was crispy and juicy,” he says.

Jollibee's broader brand platform is centered on the idea of “Joy.” When the company announced its partnership with David & Goliath in March, it debuted a new U.S. brand campaign, “Joy Served Daily.” The anthem ad featured its employees singing, Disney-movie style as they prepared and served customers coming into the store. The ad captured the gleeful spirit of its employees to illustrate how “joyful people make joyful food.”

Joy also comes from the experience of the food itself, Velasco says.

Though lawyers aren’t exactly what someone would connect to “joy,” Josh Miller, David & Goliath executive creative director, explains that the idea for Mr. Poultry was inspired by the “joyless” conversations that were going on in social media. “People are pretty vocal about their bad chicken sandwich experiences, when they had a soggy, dry sandwich. So who advocates for the people who don’t have a good chicken sandwich experience?” That’s where Chris P. Poultry comes in.

Yumi Prentice, president of David & Goliath, cited a recent social media report from Meltwater that found that from April to June, 16% of conversation in the chicken sandwich category was driven by complaints about competitors.

Ultimately, “this was really about getting the chicken sandwich into people’s hands and making them try it,” Velasco says. “We’re very confident that they’ll like it at the end of the day. “

Jollibee has been on a major expansion spree. It opened its first U.S. restaurant in Daly City, California in 1998. In North America, Jollibee now has 71 restaurants, 52 in the U.S. and 19 in Canada, and Velasco says its aspirations are to grow to 500 within the next few years.

The brand has been carving out territory in Europe as well with a 30 billion pound investment. In May it debuted a harrowing yet hopeful ad from BBH London about a man reminiscing how his family endured the pandemic. It debuted alongside a new flagship store in London’s Leicester Square, with plans to reimagine the restaurant design for the U.K. and European market.

Though the brand isn't as well-known in the States as the major players, in recent years, it's amassed a cult following with fans lining up around the block when new stores open. Some even come by horse:

Whether you came by car or by horse, thank you for stopping by our new location in #Torrance CA! pic.twitter.com/YkUrE8lEDZ

Jollibee Food Corporation also has a diverse portfolio beyond its founding brand. Among its other chains are The Coffee Bean & Tea Leaf, which it purchased in 2019 for $350 million as well as Smashburger, which it fully acquired in 2018.

Jollibee: These Filipino Fast Food Ads Will Make You Cry Over Crispylicious Chicken