Micöl Rankin moves from heartbreak to helping out 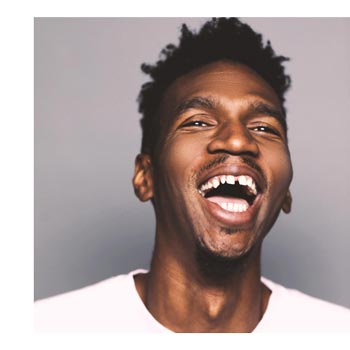 Our celebration of Black History Month continues with Micöl Scott Rankin, a multimedia artist, musician and digital designer who also works as a senior art director at Atlanta-based Moxie. Rankin has worked in advertising since 2008, creating work for brands including Coca-Cola, Starbucks, McDonald’s, Porsche, Verizon and more. Since the pandemic took hold, however, he has been actively trying to inject positivity into the ad and marketing community through his digital show #YouAreDope, which appears on LinkedIn and has featured leaders including We Are Rosie’s Stefani Nadi Olson, Publicis CEO Arthur Sadoun, former Lyft VP-Brand Jabari Hearn and many more.

This week’s guest editor, Walton Isaacson Co-Founder CEO Aaron Walton, has one word to describe Rankin: “Positivity,” he says. “You can’t manufacture the kind of pure enthusiasm and passion that Micöl has for our industry. And it shows up in his art, advocacy and generosity of spirit. He is definitely dope.”

Staying positive seems innate to Rankin, who here shares not a professional project, but an idea that he and his wife Emile Foncha conceived after the most trying of times.

A little over a year ago my wife and I were devastated as our baby, Zinnia Mianwi Rankin, died literally in our arms. We never got to take her home from the hospital as she was diagnosed with Hypoxic Ischemic Encephalopathy, or HIE. HIE is a brain injury that occurs just before, during, or shortly after birth, and is caused by a lack of oxygen to the brain. Zinnia fought hard for four days and ultimately decided it was best to say goodbye. She passed away peacefully, surrounded by the love of her family.

She was such a light and warmth for us in her short time, that we wanted to share that with the world. So, in my spare time away from my full-time job at Moxie in Atlanta, Georgia, my wife and I created a fully-realized product and brand in her honor named “For The Love of Zinni.”

The product line consists of candles, handmade crochet pieces made by her mother, coffee mugs, Zinnia seeds, air freshener and more. The proceeds go toward organizations addressing infant mortality. We have had success in our first year with the brand and have been able to donate several thousands of dollars so far to our chosen causes.

This project was meaningful to us as it represents our daughter who may not be here in the traditional sense, but we made sure she was here for the world to see, touch, and feel. We want to make sure the world knows her name and that she does exist on this earth.

And, for another example of Rankin's uplifting M.O., check out an episode of #YouAreDope: