The U.K. Royal Navy's latest spot opens on an atmospheric scene of a misty, ravaged river landscape, like something out of an Oliver Stone movie.

Unusually evocative for a recruitment film, the ad, for the Royal Marines Commandos--a division of the U.K.'s Navy--opens with the line "human beings are programmed to fear the unknown." As the camera carries on up the river to focus in on a group of marines in a boat, the voiceover goes on to explain, "as a marine, you have to face the unkown." The campaign, by Engine and WCRS, aims to bring new meaning to the Royal Marines' long running tag line "It's a state of mind."

MJZ's Nicolai Fuglsig directed the ad along with a team that included Oscar-winning director of photography, Matyas Erdly. To keep each film as authentic to Royal Marines operations as possible, they were shot with the Royal Marines on deployment, and each features real, combat-ready Royal Marines Commandos.

Another film in the campaign, "Spider", will follow on Aug 27. 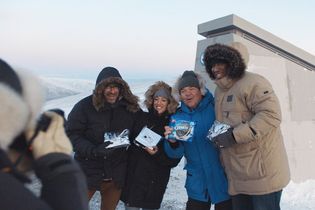 Oreo built a vault to protect itself from global destruction