What do Gremlins, energy drinks, Bob Ross, and alcohol have in common? In addition to creating mind altering experiences, they’re just a few of Mtn Dew’s collaborations and line extensions launched in 2021 alone. Now, the list expands with a PepsiCo brand crossover: Mtn Dew Flamin’ Hot.

“As a brand, Dew has a rich history of experimenting with new flavors our fans love. We certainly had them in mind when we developed the Flamin’ Hot beverage,” says Matt Nielsten, senior marketing director at Mtn Dew, in a statement. “This is one of our most provocative beverages yet, and we’re excited for Dew Nation to taste the unique blend of spicy and classic sweet citrus flavor of Mtn Dew.”

The spicy mashup, created with creative studio Burn&Broad, introduces a bold can that departs from the beverage’s typical bright minimalism. Below a blazing red and yellow variant of the beverage's logo, a revamped Sparky, Flamin’ Hot’s mascot, smirks saucily amid a chaotic pattern of flames and caution stripes.

Sparky stars in an animated spot that reveals the origin story of Mtn Dew Flamin’ Hot and flaunts the partnership’s grunge style. The anthropomorphized flame skateboards into a vibrant green and orange living room, hops on the couch and whips out his phone to scroll his Instagram feed. As he double taps images, they ignite in fiery hues. When a can of Mtn Dew appears, Sparky’s eyes light up mischievously. He double taps the image and the Mtn Dew Flamin’ Hot can is revealed.

Along with the beverage, there's also an apparel capsule collection from Broken Promises, a youthful brand that combines contemporary trends with nostalgia. The Gen Z-geared line includes shirts, hoodies, sweatpants and accessories emblazoned with skulls, barbed wire and snakes in addition to Mtn Dew and Flamin’ Hot iconography in a mix of reds, yellows, blacks and greens. Branded phrases like “Do the Dew” contrast more poetic lines like “let’s go down in flames together.” 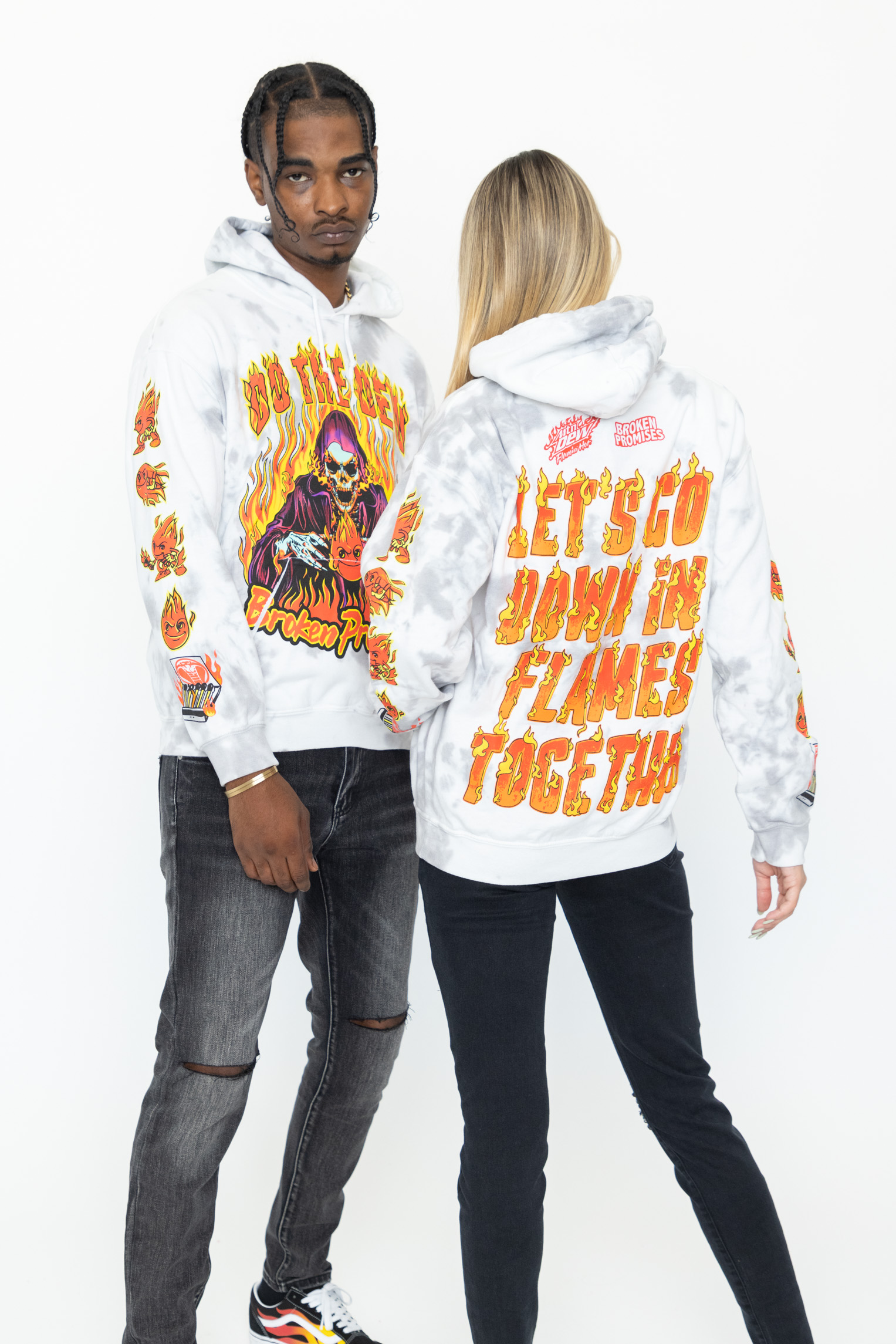 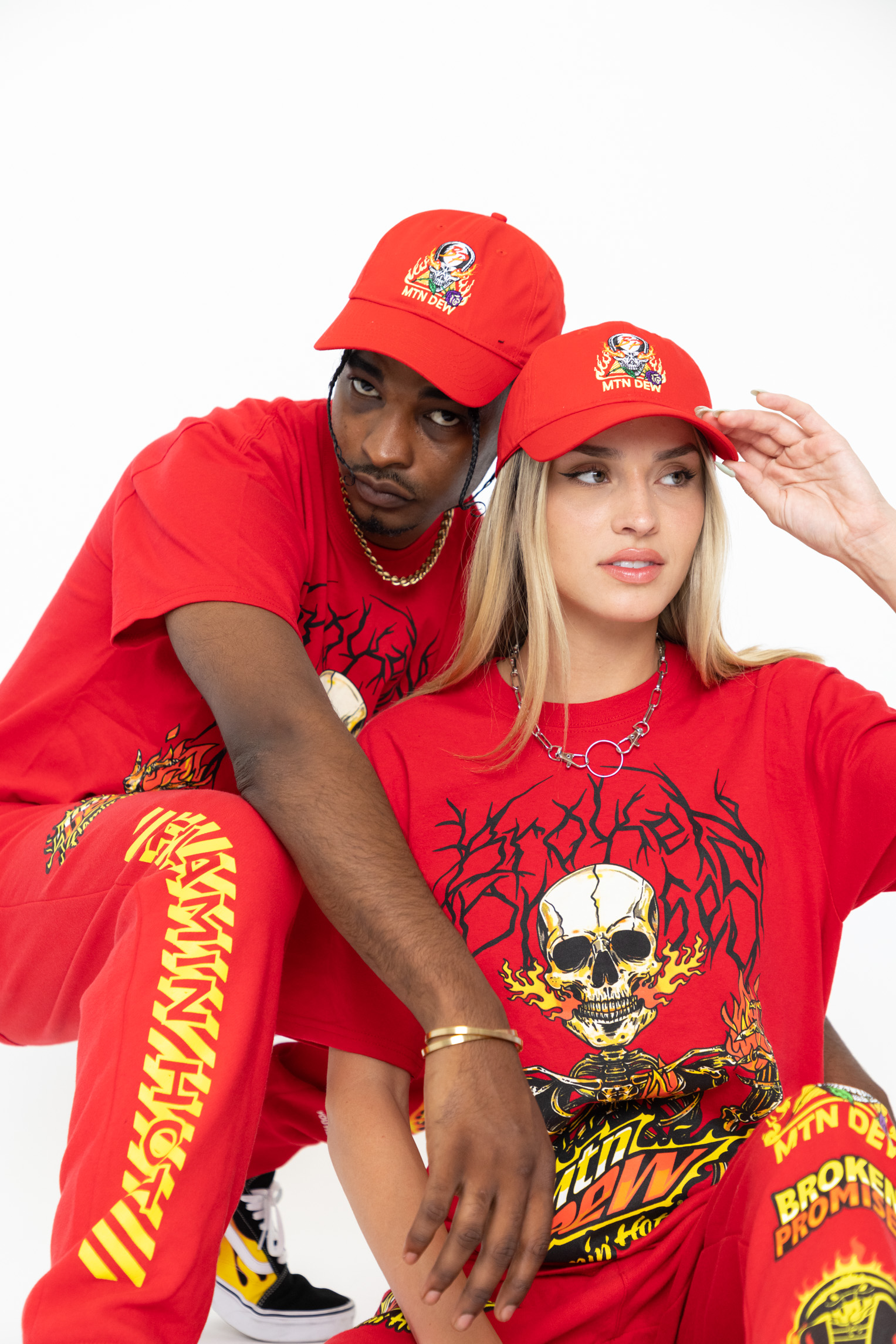 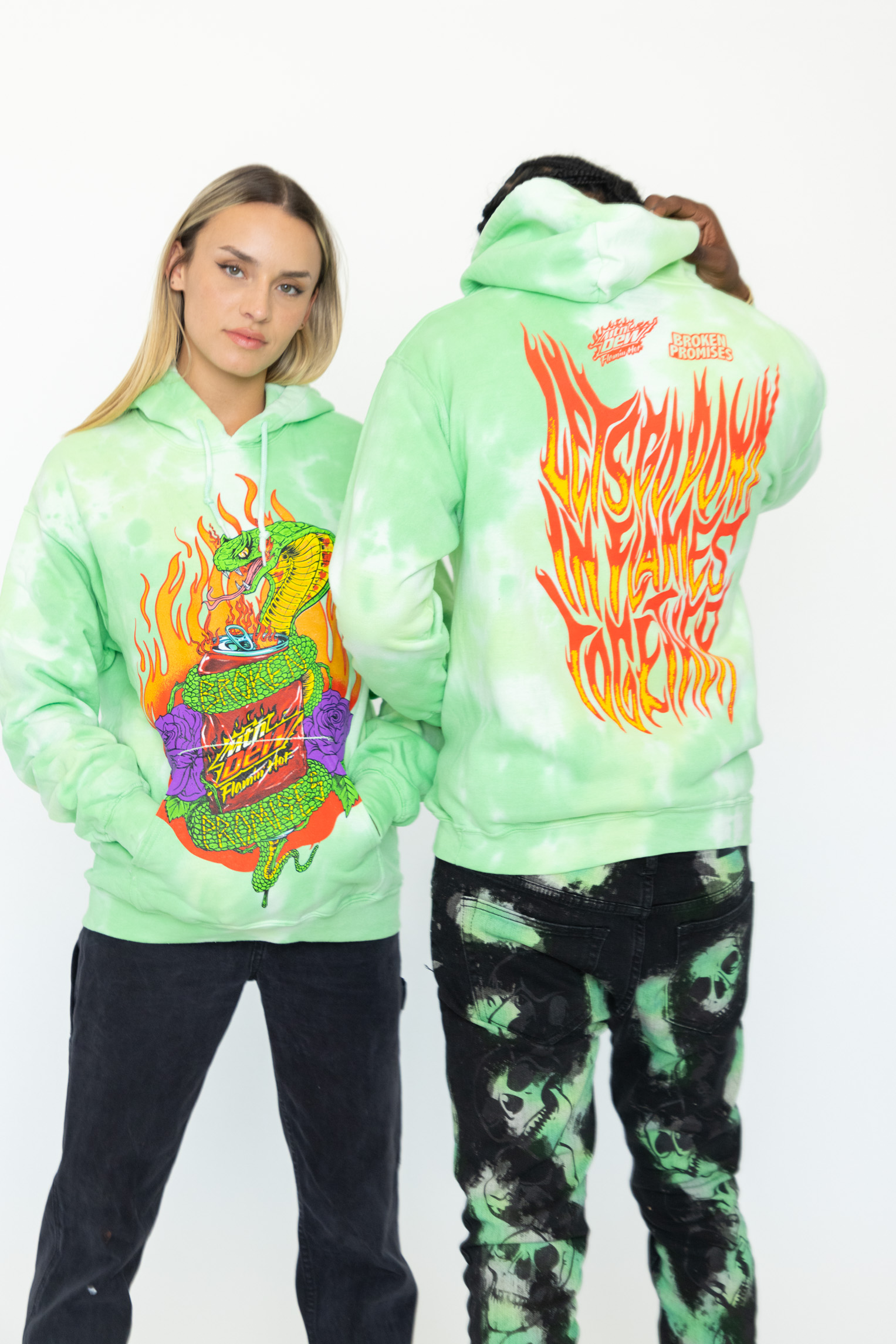 “This was a fun challenge from a design perspective, to bring together the iconic Mtn Dew brand with the unique Flamin’ Hot flavor and ensure we could deliver visuals, content and fashion that fans of both Dew and Flamin’ Hot would love,” Carl Gerhards, senior director of design at PepsiCo Beverages North America, Mtn Dew, Flavors & Energy, said in a statement. “Looking at the history of Flamin’ Hot, we thought a lot about how Sparky had been jumping from Cheetos to other snack brands for years and how that might have become routine for the character."

The campaign features an influencer push on social media from “granfluencers,” or grandma influencers, like @BaddieWinkle and @GrannyCoyBundy who specialize in hip and edgy content that was unexpected from elderly women before the trend became popular on platforms such as TikTok.

The Flamin’ Hot flavor is most popular for its original Cheetos snack, but has also mixed with many other foods. The Mtn Dew flavor marks its first foray into beverages. It will be available starting August 31 only through the virtual Dew store.

Mtn Dew: There's a real Mtn Dew mountain and you could be its ranger