OkCupid goes from 'DTF' to overt politics in first global campaign

Dating site OkCupid is leaning heavily into the political themes touched on in its previous campaign, the provocative and award-winning “DTF.” As 2020 will likely be dominated by talk of polling, political positions and deeply-held values, so too will “Ask Yourself,” its first global push and first work to debut from Mekanism.

Breaking today, it includes a series of out-of-home placements, running first in New York City. They assure viewers that it’s okay to choose a date—or maybe even a partner for life—based on their progressive opinions about abortion, gender identity or activism. The campaign features messages like “It’s OK to choose to only date someone who’s pro-choice” and “It’s OK to choose Mr. Right based on how far left he leans.” 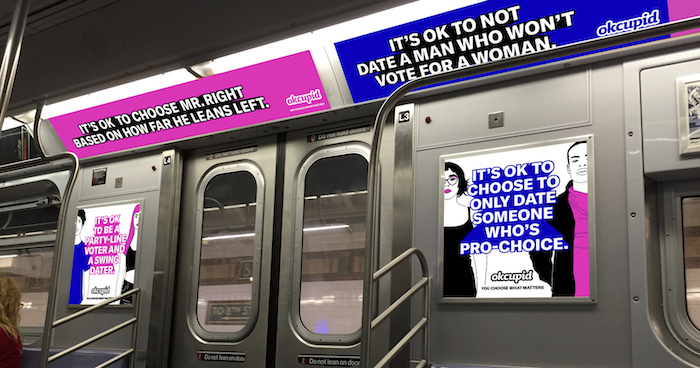 “'Ask Yourself’ is informed by the behavior we witness from daters—they are talking about politics on their profiles and using our questions to find great matches more than we have ever seen in OkCupid's history,” says Melissa Hobley, the company’s global chief marketing officer. “What's cool is that there are entire generations of young people saying, ‘I’m actually not interested in a conversation—let alone a date with someone—if you aren't engaged in what's going on in the world.’”

In addition to the out-of-home, Chilean artist Xaviera López created looping animations inspired by OkCupid questions—the personal queries each user can answer to improve the matches presented by the algorithm. The illustrations expand the campaign beyond the political, into topics like sex, love and attraction. While the site’s research shows that differing political views top users’ lists of “deal-breakers,” opinions about music, travel and the environment also ranked highly.

In 2018, Wieden & Kennedy New York’s “DTF” repurposed sexually explicit slang into new phrases that celebrated other activities couples might share. Conservative backlash to images of romance between women thrust the company into the midst of the culture wars, where it has intentionally remained. “We were pretty blown away by the reaction ‘DTF’ created,” Hobley says. “It showed us what we were already seeing on OkCupid—daters care about politics.”

Mekanism’s attempt to follow up on the success of “DTF” has already mirrored the earlier campaign in one way—like “DTF,” some images from “Ask Yourself” have been banned by transit systems with restrictions against certain kinds of political content. While OKCupid is submitting the entire campaign to run in all markets, anything that doesn’t make it in front of the public will be available to see on the brand’s Instagram profile. 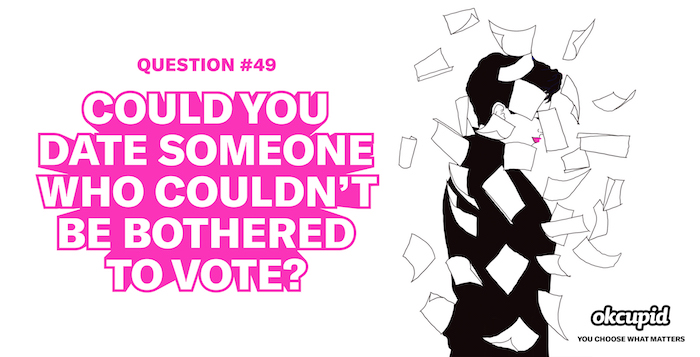 OkCupid: OkCupid reaches out to bears, pansexuals, vaxxers and more in most inclusive campaign to date