Over the last few months, Hungry Man director Bryan Buckley has been on a mission to speak out against the POTUS through art. With the Trump Statue Initiative, he and a team of creatives have erected “living monuments” that memorialize the President's key “accomplishments” over his term. Since July, the group has re-enacted moments like Trump’s photo op at St. John’s Church (“The Poser”), his deployment of federal forces to quell protests ("Ode to Putin"), and his treatment of veterans and lives lost to COVID (“The Final Push”).

And now, with just a week to go before Election Day, Buckley and team made one final push—with a peeing POTUS fountain.

Today before the Lincoln Memorial, the TSI put up an installation of Trump urinating on late Supreme Court Justice Ruth Bader Ginsburg’s court seat, now to be filled by Amy Coney Barrett after an accelerated confirmation process. (Apparently, he goes for 45 whole minutes—that’s a lot of Diet Coke!)

Further down, before the Memorial’s Reflecting Pool, the group erected another monument showing a frontline worker and a firefighter mourning at a pair of freshly dug graves, representing COVID victims and the environment, respectively. Trump stands between them, arms spread wide triumphantly raising a shovel and rake. “Don’t Be Afraid,” reads the title of the piece.

The locations of the statues adds another layer to the joke, fresh off the last debate in which former Vice President Joe Biden had poked fun at Trump’s self-comparison to the 16th President (a joke that seemed to go over his head).

Later in the day, the TSI also made its way to the Trump Hotel, with a piece titled “Safety for the Suburban Housewives.” It depicts a woman climbing a ladder to switch a light bulb while statue Trump peeks up her skirt from below. 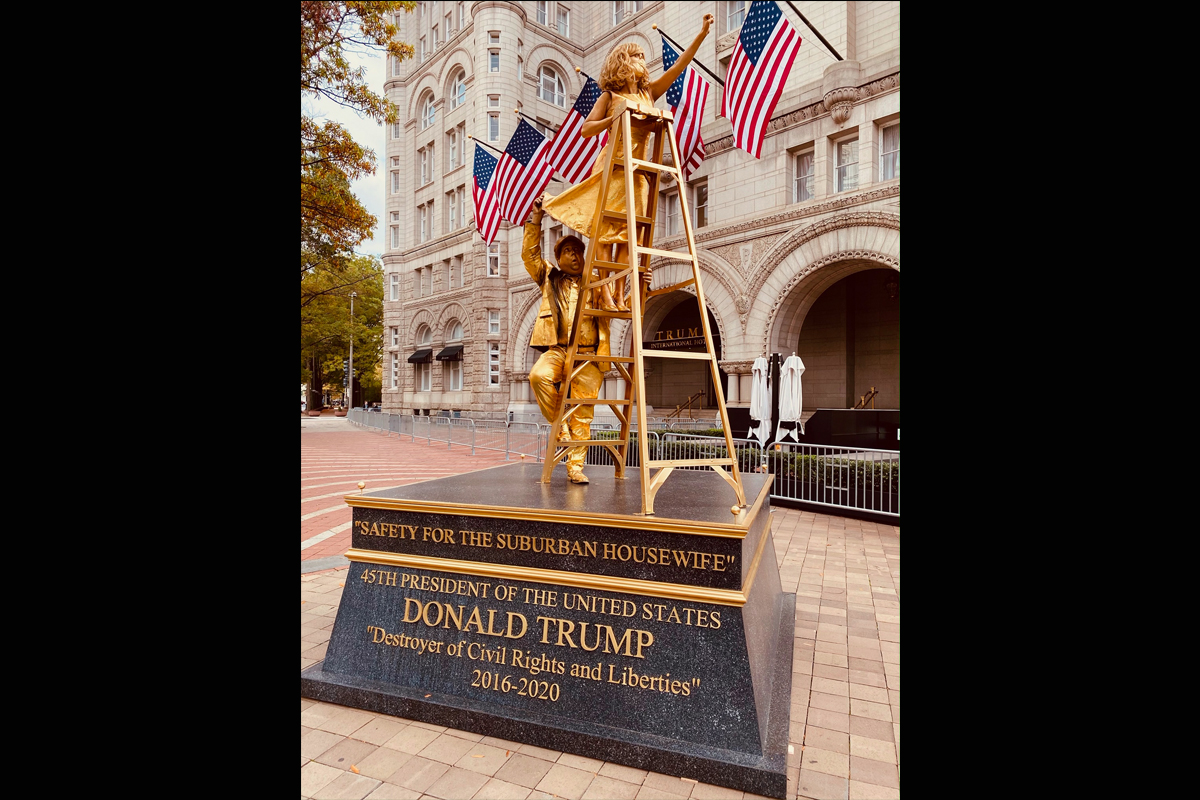 And with that, Buckley says that the Trump Statue Initiative “rests our case” until Election Day. His hopes, he says, are “that somehow through this art we were able to open some voters’ eyes—and get them to join the fight to get this monster out of office.”