Starting today, readers sitting down to peruse major newspapers including The New York Times, USA Today, and the Los Angeles Times will encounter bars and bars of redacted copy on their front pages. The black lines running across multiple publications are actually part of an integrated campaign from Amazon Studios promoting its new film “The Report,” which centers on the CIA’s post-9/11 interrogation and detention program.

The redacted pages are actually cover wrap or insert ads running in the various papers. Other print publications participating in the campaign over the next few days include the Boston Globe, the Chicago Tribune, the San Francisco Chronicle and the Dallas Morning News. Many of the ads will feature the logos of the actual newspapers, but The New York Times and The Washington Post, which have more restrictive rules on using their wordmarks in ads, will feature a masthead reading "Truth Matters." Digital versions will appear as takeovers on multiple news organization homepages, each one tailored to the particular media outlet. CNN, Fox News, The Guardian and Apple News will be among those taking part.

Along with the redactions, Amazon Prime also tapped neo-conceptual artist Jenny Holzer, known for her statement-making work involving words and language, to create out-of-home animations that will travel across Los Angeles on LED trucks today through Nov. 18. The works incorporate text from the film’s writer/director Scott Z. Burns. Heartcomix served as the truck activation partner on this rung of the campaign.

The idea will also carry over into social media. On Twitter, Vice, IMDb, Prime Video and others will be part of a thread of blacked out tweets with information about the movie. Some of the campaign partners will also obscure their display names. The Instagram feed for “The Report” also now displays a grid of thumbnails, framing the words “Truth Matters.” The campaign also includes a custom emoji, a redacted piece of paper. It will appear on Twitter whenever anyone uses the official hashtag #TheReportMovie. 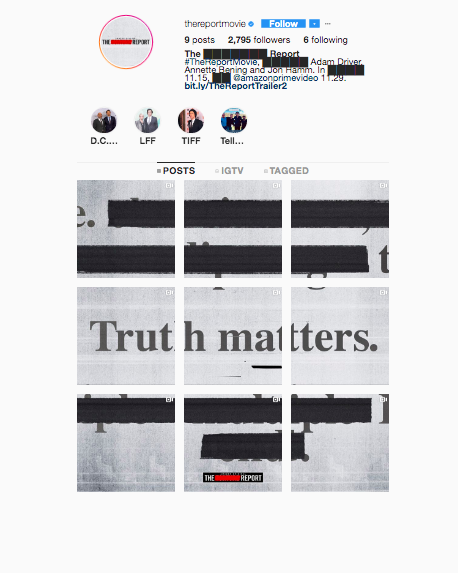 While the campaign speaks to film's central theme of "Truth Matters," it mirrors much of the cultural conversation around media today.  Some of the newspapers participating in the effort have been running their own pushes geared around protecting the truth, including The New York Times’ much-decorated effort and CNN’s “Facts First.”

"The Report" is set to hit theaters tomorrow and will begin streaming on Amazon Prime beginning Nov. 29. Its stars include Adam Driver, Jon Hamm and Annette Bening.