Latest from marketer's 'Black Is Beautiful Campaign' is a difficult story, beautifully told

But it's another P&G ad "The Talk" from BBDO, New York for P&G's "My Black Is Beautiful" program that came as more of a surprise, winning the second Film Grand Prix.

There was some controversy about the ad in a public jury at the Andy Awards earlier this year. That centered on whether the ad properly in which moms talk to kids about how to deal with various dimensions of racism properly reflected fathers in African-American homes.

That issue didn't come up in the global Cannes jury, Sanches says, and neither pick prompted controversy on the jury. (As president, he doesn't vote, so he didn't have to recuse himself from the honor for his sibling agency, and he doesn't work with P&G anyway, he noted.)

"Even though it had some issues locally, I think 'The Talk' is a great platform that can be used on a global sale," Sanches says.

Indeed, both picks were easy, and he says he didn't feel pressure to award just one Grand Prix, because he likes the message sent by the pairing.

"When we saw the two, I thought it was the right message to set for the next year for the whole industry," Sanches says. "We are missing some humor. But we also need to have some responsibility. We have to engage people in a broader message."

The 2,200 entries in pre-judging were winnowed to 201 for Cannes. Sanches directed the jury to pick Golds first, and they came back with a dozen unanimously.

"For the Grand Prix, I directed them to narrow to four pieces of work, and to my surprise they came back with two," he says. "It was practically unanimous."

At No. 3 in TV/Film, Procter & Gamble lived up to its "Proud Sponsor of Moms" mantle when it debuted this poignant film that shed light on the particular challenges faced by African-American mothers. It shows how struggles we may have thought were left in the past remain a heartbreaking reality today. Various vignettes depict how mothers balance their fears with hope as they nurture their children in an uncertain world. BBDO New York created the spot, directed by Malik Vitthal via Corner Shop.

Procter & Gamble is both "Proud Sponsor of Moms" and supporter of African-American women, with its ongoing "My Black Is Beautiful" campaign. These concerns merge in the marketer's heart-rending film about the unique challenges African-American mothers have in raising kids -- in decades past, and continuing today.

Scenes that take place over different eras depict moms consoling and educating their children after they encounter racism: one daughter receives a compliment that she's pretty -- "for a black girl," a boy gets called the n-word while another has faced discrimination on the sports field.

The mothers encourage their kids to endure and hold their heads up high, no matter what the challenges. One mom tells her daughter she'll do fine at science camp, but she'll have to "work twice as hard and be twice as smart," and the mother with the "pretty" daughter drives home that she's "beautiful, period."

But there are other fears as well, ones that the women may have little control over. One mom insists that her son take his ID with him to music practice, because it will be late when he returns home. Then a young woman at the steering wheel tells her mother she need not worry because she's a "good driver," but that's not what Mom's real concern is.

Unlike many other socially-conscious ads, the film, entitled "The Talk," doesn't sugarcoat with assurances that things will only get better. It's inspiring yet filled with an unsettling uncertainty -- a thoughtful marketing approach that's sure to promote real conversation.

P&G introduced the "My Black Is Beautiful" campaign a decade ago, with the goal of helping black women and girls feel confident about themselves, and in the process, develop a stronger bond with black consumers. The marketer intends this latest ad to open about a broader discussion about discrimination among a spectrum of communities. Further films on the accompanying website for "The Talk" show how real people have dealt with negative bias in their everyday lives.

"We know that bias is not just an African American issue," said Damon Jones, director of global company communications of Proctor & Gamble in a statement. "It's an issue that takes on many shapes and forms, across gender, race, age, weight, sexual orientation, and more. Our goal with 'The Talk' is to help raise awareness about the impact of bias. We are also hopeful that we can make progress toward a less biased future by recognizing the power of people of all backgrounds and races showing up for one another." 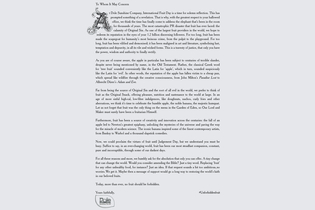