Best Buy unveils rebranding that was a year in the making

By
Adrianne Pasquarelli
Published On
May 09, 2018

Best Buy is tapping its own 100,000 blue-shirted employees as the stars of its new marketing campaign, a rebranding effort designed to highlight the retailer's personalized customer service. On Wednesday, the Minneapolis-based electronics chain is rolling out a new website and logo, and will air TV spots later this week.

"It's really about building more aggressively toward serving customers and helping change lives with technology," says Whit Alexander, a three-year veteran of Best Buy who was promoted to chief marketing officer last year. "We needed a way to tell the story a little differently through how we interact with customers." Alexander says the new work, which has a "rallying cry" of "Let's talk about what's possible," positions Best Buy as an inspiring friend that can help consumers achieve their goals.

Work on the campaign started roughly a year ago. The "big thrust" of the new work was done internally, notes Alexander, adding that Best Buy still works with a number of agencies including Redscout, Grey and Wunderman on creative strategy. Grey recently created Best Buy's holiday campaign. Starcom handles media duties for the retailer.

A year after consolidating its marketing department and eliminating the role of chief creative officer, Best Buy is back to bulking up its in-house creative team. In November, the company hired Bruce Bildsten, who spent two decades at agency Fallon, as executive creative director. The brand is in the process of hiring dozens more for the creative team.

In a 30-second TV spot "Talk the talk," Best Buy employees counsel customers. Everything in the video is black and white, save the bright blue shirts of the staffers. A 60-second version will air digitally, while 15-second clips will also debut on TV. Academy Award winner Errol Morris directed the videos.

The retailer has also debuted a new logo, after some 30 years. The Best Buy name, still in black letters, is outside of the yellow price tag, which retains a diminished location in the bottom right corner.

Best Buy representatives declined to specify the budget of the new push. Last year, the retailer spent $139.3 million on measured media in the U.S., according to Kantar Media.

Despite the crushing omnipresence of Amazon, Best Buy has been holding its own with consumers, thanks to a customer-experience-focused strategy that positions stores as showrooms. CEO Hubert Joly is credited with the plan, which he unveiled six years ago in an effort to transform the company for the modern age.

In the fourth quarter, Best Buy posted revenue of $15.4 billion, a nine percent rise over the year-earlier period. Online comparable sales, which represent 20 percent of U.S. sales, were up 18 percent for the period. Net income was $364 million for the quarter. It reports first-quarter earnings later this month. 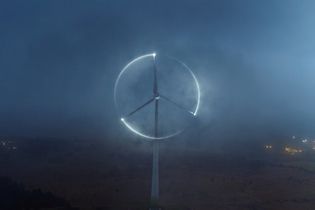