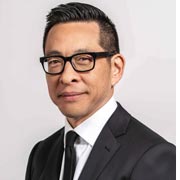 Our celebration of Asian American Pacific Islander creative excellence for AAPI Heritage Month now shines a light on Tracy Wong. The respected creative leader more than 25 years ago founded Seattle-headquartered agency Wongdoody, where he continues to serve as chief creative officer. Over his career, he’s steered some of the industry’s iconic campaigns, and has worked with clients including Amazon, Microsoft, ESPN, Fox Networks, T-Mobile and the Center for Disease Control. His groundbreaking effort for Chevy’s restaurants, created while he worked at Goodby, Berlin & Silverstein San Francisco, was inducted into the Clio Hall of Fame in 2006.

This week’s guest editor, David & Goliath Founder David Angelo, cites Wong as a huge inspiration as he himself was carving out his own path. “I grew up in the industry studying the work of great art directors and Tracy Wong was one of the standouts,” he says. “From his work at Goodby Silverstein & Partners to his own agency WongDoody, his creative always embodied this amazing aspect of the craft that was so pure and conceptual. It wasn’t designed to be funny or different, it was brilliantly purposeful in a way that inspired so many in the industry.”

Here, Wong shares two key lessons he’s learned during this career about the key to doing breakout, impactful work, and how they came together in one of the most important projects of his career.

At the beginning of the 20th Century, my Chinese grandfather came to America on a ship from Canton with only the clothes on his back, his entire family killed in a war with the Japanese.  He had a paper “uncle” working in a restaurant in Portland, Oregon, and somehow escaped the Exclusion Act banning Chinese from becoming American citizens.

My Japanese mother’s earliest memories are of the cold air and dust of the Japanese internment Camp Minidoka in Idaho.  She was just 3-years-old and was imprisoned from 1942 to 1945.

Yes, both experiences are so completely foreign to me a generation or two later. And certainly the profession I chose, advertising, was something well beyond the understanding of either side of my family.  “Art?  How are you going to make a living at doing ‘art?’”  (I did think about becoming a dentist but my mom talked me out of that.)

I started as a junior art director at Ogilvy & Mather New York to founding my own agency, Wongdoody, now 600 strong across the globe. What’s of importance to me personally is how the campaign I selected was the culmination of two big lessons I’ve learned over a career that spans four decades.

The first lesson is whenever possible use your superpowers for good. Our “superpower” as ad people is the ability to send or broadcast messages to thousands, if not millions, of people. That’s a huge responsibility.  And we must use them for good—as in public good—whenever possible. The first time I did that was on an anti-tobacco poster campaign for the New York Lung Association while at Goldsmith/Jeffrey N.Y.  For the first time in my career, I felt the weight of what we could do to help others creatively.

The second lesson is nothing is more impactful than reality itself.  No matter how clever we think we are, it’s impossible to create a script or a video that will cut through with more power and authenticity than getting out of the way and letting reality do its thing.  Witness the power of things such as reality TV and TikTok. I learned that lesson when working on a TV campaign for Chevy’s Mexican Restaurants at Goodby, Berlin & Silverstein/SF.  We essentially created “reality TV” by capturing live reactions on the street in an attempt to make our commercials as fresh as the restaurant’s food (which was made that day and thrown out that night).  The power in that campaign was the execution, the real life absurdity of trying to make a commercial in a matter of hours starring real people on real street corners.

These two big lessons come together in “Dear Me,” an anti-tobacco campaign for the Washington State Department of Health funded by the Big Tobacco settlement in 1998. (see above)

I’ll start with the results: the campaign drove smokers to a quitline at a rate three times greater than previous campaigns, a level unheard of by the state.  The success rate for quitting is 5X higher when someone engages with an outside group rather than go it alone.  Because of the campaign’s success, it was adopted by the Center for Disease Control and distributed nationally to 20 other states and counting. From a creative standpoint, it won at Clios, Cannes, D&AD, One Show and landed the Grand Prize from the Radio Mercurys.

The insight was simple. The target, hardcore smokers, could not be convinced to quit by outside influences like family, doctors and scary ad campaigns. Only they could convince themselves, which is exactly what we had them do: write letters to themselves, then read them aloud in a documentary-style setting—all filmed by Pulitzer Prize-winning documentary photographer David Turnley.  No stages.  No actors.  No scripts.  Just the smoker, pen and paper, a video camera, in their home.

The campaign was stark, gritty and so unlike “advertising.” We let reality do its thing and got out of the way creatively.  Based on the numbers, we’ve helped improve the lives of thousands and help save countless lives and families.  That’s absolutely using your superpowers for good.

Lessons learned.  So where do we take them next?