Not 'Dead' yet: Eight seasons in, AMC's zombie drama is bowed but unbroken 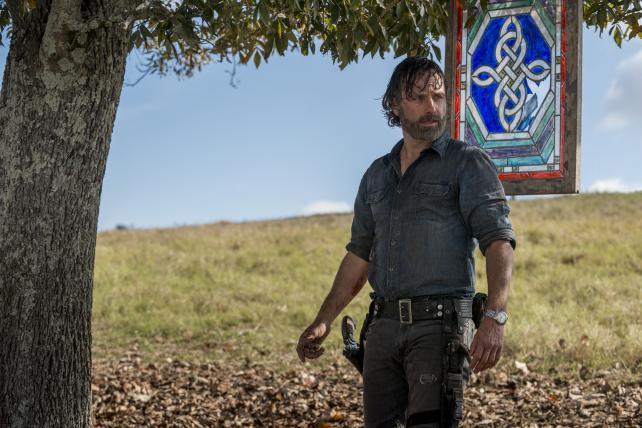 AMC's "The Walking Dead" closed out the season with its lowest-rated finale since the show's inaugural campaign in 2010, scaring up 7.92 million viewers and a 3.4 rating in the advertiser-coveted demographic, which works out to around 4.4 million adults 18 to 49.

While the 70-minute capper eclipsed everything else on the tube Sunday night—TNT's live coverage of the Houston Rockets' 104-101 victory over the Minnesota Timberwolves in the NBA playoffs was a distant second with a 1.9 rating—the audience deliveries didn't measure up to previous "Walking Dead" finales. Just a year ago, the show finished its seventh rotation in front of 11.3 million live-same-day viewers and a 5.4 rating, which adjusted down to a 5.0 upon application of the C3 currency.

Over the course of its 16-episode arc, Season 8 averaged 7.82 million viewers and a 3.4 in the demo, which marked a 31 percent decline in overall deliveries compared with last season's 11.4 million viewers and a 37 percent drop versus the year-ago 5.4 rating. This was also the lowest-rated season of "The Walking Dead" since the show's six-episode first flight ran in fall 2010.

As much as ratings erosion is about as inevitable and inescapable as the Big Dirt Nap, fans of "The Walking Dead" have no reason to fear that it's in any danger of disappearing from AMC's schedule. Setting aside the fact that the show was renewed for a ninth season back in January, "Dead" is far too vital a resource for AMC to snuff out any time soon. According to recent Moffett-Nathanson analysis, "Dead" last year accounted for 14 percent of AMC's C3 gross ratings points, making it about as integral to the network's programming slate as the NBA is to TNT.

If "Dead" can no longer lay claim to being TV's highest-rated primetime program (NBC's "Sunday Night Football" leads the pack with a 6.1 in the 8-49 demo), it is still the No. 1 drama, topping Season 2 of the Peacock's "This Is Us." Per Nielsen, NBC's Tuesday night blockbuster averaged a 2.7 live-same-day rating, or a 3.1 if the post-Super Bowl LII episode is thrown into the mix. "Dead" currently ranks second among all scripted TV series, trailing ABC's "Roseanne" revival (4.4).

To put the "Dead" deliveries in context, the average rating for a scripted broadcast series in 2017-18 is currently a 1.1. In other words, despite airing on a channel that is only available in 76 percent of all TV homes, "Dead" more than triples the average draw of the Big Four networks.

Naturally, advertisers with a few marketing dollars to spend are always keen on any show that commands the attention of so many younger consumers, so while "Dead" has stumbled of late, its commercial inventory still fetches a premium on the open market. During last year's upfront bazaar, the basic-cable drama was the priciest buy behind only the three prime-time NFL packages, with 30-second units selling for around $420,000 a pop. (According to TV buyers, "This Is Us" last summer was fetching around $400,000 per unit.)

According to iSpot.tv data, among the more visible advertisers in the Season 8 finale were American Express, Disney/LucasFilm ("Solo: A Star Wars Story"), Taco Bell, State Farm and Cricket Wireless. Twentieth Century Fox also carved out its share of impressions with a special two-part "Deadpool 2" teaser that launched in "Dead" and concluded in the following hour's season premiere of "Fear the Walking Dead." A crossover episode that saw "Dead" mainstay Morgan (Lennie James) break camp and join forces with the spinoff crew, the "Fear" opener averaged 4.1 million viewers and a 1.6 in the demo.

Looking ahead, "Dead" showrunner Scott Gimple has handed over the keys to the franchise to writer Angela Kang, who has worked on the series since Season 2. If nothing else, Gimple's promotion to oversee AMC's "Dead" multiverse suggests another spinoff or companion series may be in the works, while Kang's series takeover is an opportunity to shake things up at the flagship. But some "Dead" fans may wonder if the final moments of Sunday's finale will only prove to be a red herring, as Maggie's vengeful turn may be thwarted by contractual wrangling and/or scheduling concerns. AMC has yet to re-up actress Lauren Cohan for Season 9, and her "Whiskey Cavalier" pilot is very much in contention at ABC.

Despite losing a third of its younger viewers, "The Walking Dead" remains TV's top-rated drama. ("Roseanne" is currently running ahead.)