September 21, 2018 11:58 AM
In the wake of the sale of Time magazine to Marc and Lynne Benioff, Simon Dumenco examines the recent history of media acquisitions by wealthy strivers. 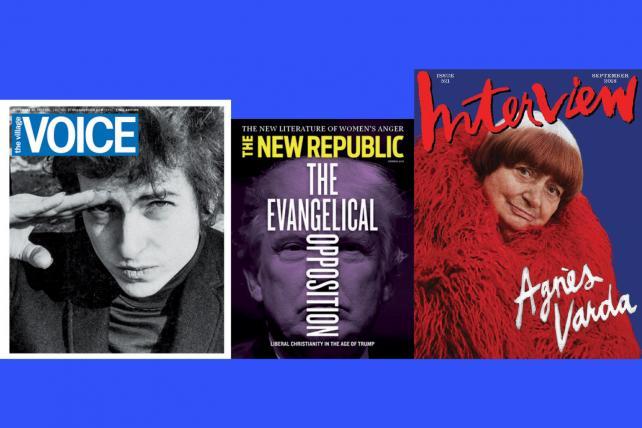 One of my oldest, dearest friends is a visual artist who's had quite a remarkable career. He's had gallery shows around the world, and his paintings, drawings and multimedia works have been exhibited at the Museum of Modern Art, the Whitney Museum of American Art and the Royal Academy of Arts in London, to name just a few.

Right now, though, he's sort of in limbo. The art world and its wealthy collectors are notoriously fickle, and the last major gallery that represented him ended up slow-rolling payments to him on sales of his work to such an extreme (more than a year, with tens of thousands of dollars owed) that he had take legal action to get his damn money.

Every month or so, he and I grab lunch and compare notes, and I'm always struck by how much the art world and the media world have in common.

Case in point: Peter Barbey, who purchased the Village Voice in 2015, then shut down its print edition last year—and then, on the Friday before Labor Day, shut the publication down entirely, laying off the staff that had been keeping VillageVoice.com going. Peter is a scion of the Barbey clan (No. 48 on Forbes' 2015 America's Richest Families list, thanks to their ownership stake in apparel conglomerate VF Corporation, of Lee, North Face, Timberland and Wrangler fame). It seems that he bought the Voice for the same reason some art collectors buy art—because it offered cachet and entrée. It's about being a player.

That's the same reason, of course, that Jared Kushner bought The New York Observer in 2007. Well, that and a desire to attempt redemption for the disgraced Kushner name; Jared's dad is the real estate mogul Charles Kushner, who spent 14 months in federal prison in the mid-aughts after convictions for illegal campaign contributions, tax evasion and witness tampering. (The main father figure in Jared's life these days is a guy named Donald.)

Unfortunately, as costly as it can be to own expensive art (the insurance! the personal curator! the construction cost for the climate-controlled wing of the estate!), owning a media property these days can turn out to be an unimaginable money pit—particularly for dilettante media-mogul wannabes. Kushner killed off his paper's cash-sucking print edition in 2016 and then reportedly tried to sell the website. At any rate, the Observer has plummeted in prestige and influence under his ownership. (See also: Chris Hughes, a Facebook co-founder, who bought The New Republic in 2012—then four years later sold the venerable political magazine after nearly driving it into the ground.)

But, hey, hope springs eternal—especially in the hope-starved media economy.

And so enter Salesforce.com co-founder Marc Benioff and his wife, Lynne, who just announced that they're buying Time magazine for $190 million in cash from Meredith Corp. The couple seems to have serious intent and a respect for journalistic independence, so maybe they're not going to be yet another set of dilettante media moguls? Then again, Marc Benioff did give a brief interview to David Streitfeld of The New York Times last week that Benioff insisted on conducting by text message, because, as he explained, "Hard to believe but … I am in a massage."

Meanwhile, as if to fully merge my art-world-meets-media-world obsession, just as the Benioff news was breaking, the September issue of Interview magazine—the arty monthly founded by Andy Warhol—was hitting newsstands. Yes, Interview, which newsprint magnate and art collector Peter Brant decided to shut down in May, laying off the entire staff after the magazine failed to pay any number of its creditors—including Fabien Baron, the magazine's editorial director, who said he was owed nearly half a million in back pay. (In June, the Times sourly noted that while Baron was trying to collect that sum, Brant bought a $2 million horse in Kentucky.)

But it turns out "killing" Interview was just a blunt-force way to discharge its debts. A hasty fire sale of Interview assets—including its trademarks and archives—went down recently and everything was sold for a song to a startup called Crystal Ball Media, whose officers include former Interview president Kelly Brant, who is, by the way, Peter Brant's daughter. Her dad, she told The Business of Fashion, "holds no position" and now "has nothing to do with the magazine."

"Over nearly 30 years as Interview's owner," as The Business of Fashion noted, "Peter Brant developed a reputation for not paying the bills"—and naturally the creditors from the shuttered Interview won't be seeing any money from the reborn Interview.

Weirdly enough, half a block from my Manhattan apartment—and, coincidentally, just two blocks from the old Village Voice HQ—Peter Brant is preparing to open a branch of his Greenwich, Connecticut-based Brant Foundation Art Study Center in a towering former electric-utility substation. He bought the building in August 2014 for $27 million. After years of renovation, it's set to open in early 2019—and I suspect the new, magically debt-free Interview will take notice.

By the way, exhibition viewings will be, of course, by appointment only.