In an evolution, Edelman moves deeper into agencies' turf

June 11, 2018 06:14 PM
Edelman is showing off its "communications marketing" transformation with new "Act with Certainty" campaign. 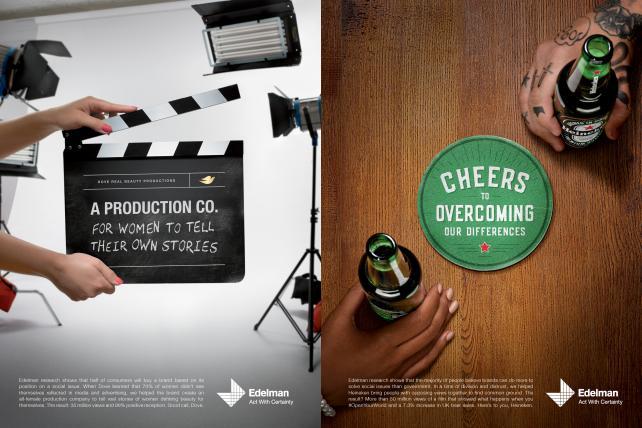 Facing a media business in decline and an endemic crisis in trust, Edelman is evolving its own way of doing business. The giant public relations and marketing consultancy firm has in recent years been quietly bulking up its creative, paid media and consulting expertise. Now it's launching a repositioning campaign called "Act with Certainty."

The campaign is meant to promote Edelman's work with brands in this expanded capacity, like its working with REI to close its stores on Black Friday and start its #OptOutside movement; helping guide CVS Health as it pulled cigarettes and tobacco products from more than 7,000 stores; and helping Dove launch an all-female production company to tell women's stories. The campaign appears in marketing trade publications for now.

It's all meant to illustrate Edelman's new focus on "communications marketing," which goes beyond its public relations roots to include integrated creative campaigns and movements "driven by earned-centric, social-by-design storytelling." The firm says it is on track to bring in $1 billion in annual revenue within the next year and a half.

Edelman President and CEO Richard Edelman cited a few factors that led the firm to the new marketing approach. The media business was in the midst of a "business model problem," he says, where journalism was changing and there were simply fewer reporters to pitch stories to. And traditional creative agencies had a slate of new competition from media buying and digital firms encroaching into the creative business. There was a "real crisis in trust," he says. 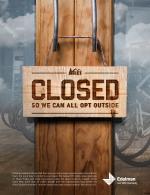 "The idea of merging brand and reputation plays to our sweet spot," he says. He pointed to the firm's recent work with Starbucks regarding what the brand is and what it means for America.

"There is more risk in being paralyzed and afraid than there is in acting," Edelman says. "The great brands will distinguish themselves by what they do—not just by what they say … [Brands] will sell more products to more loyal customers if they are relevant."

Edelman hopes to compete directly with traditional ad agencies and digital firms to be a lead agency for this kind of creative, media and brand work.

The new model started to take shape about five years ago with a slate of new hires—including Mark Renshaw, most recently chief digital and innovation officer at Leo Burnett, to run the Brand practice; Carol Potter, former CEO of BBDO Greater China to be CEO of Edelman EMEA; and Jesse Lin, formerly vice chairman of APAC and CEO of Greater China for McCann, to be CEO of Edelman APAC.

The firm has also recently hired leaders from agencies and organizations including GroupM, Digitas, Ogilvy, Energy BBDO, R/GA and Resolution Media to work on paid media and digital.

Edelman, which employs more than 6,500, has hired more than 600 creatives, planners and paid media specialists and has also built up a paid media business that now manages more than $200 million in spend. The firm is also launching a communications advisory business, which will be led by Richard Wergan, former chief marketing and brand officer at Royal Phillips.

Renshaw, who joined in January 2017, says Edelman is well positioned to keep a story going and add in new dimensions, whereas traditional ad agencies aren't as familiar with that aspect.

An example: The firm worked with Mars Wrigley Confectionery to create the "Extra Care Box" in China. Since children in China bring lunch boxes to school to collect hot meals from the cafeteria, the firm helped to create an interactive lunchbox encouraging children to pop in sugar-free gum after eating.

Pattisall, the Forrester analyst, says he's found many PR agencies are trying to create "brand-style engagements" that can be "PR-able events that help result in those earned impressions." He gives the example of McCann's Fearless Girl, which didn't have the same kind of traditional media spend but more of a PR approach.

"By having this type of capability, it only increases their ability to be a really good PR agency," he says. The only trouble, he adds, might be breaking outside that legacy, since Edelman is historically known for PR.

"There is more risk in being paralyzed and afraid than there is in acting," the firm's president and CEO Richard Edelman says.