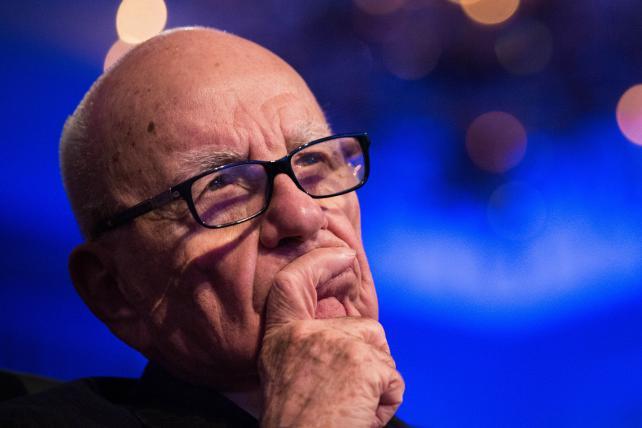 Rupert Murdoch is calling on Facebook to pay "trusted" publishers if it wants to carry their news stories and videos, much like a cable company pays networks for their channels.

The media mogul, who controls The Wall Street Journal and Fox News, has been among the most vocal of the old media guard warning against the rising power of Facebook. The social network has promised major changes to how it serves news on the site, which threatens to disrupt how publishers have become accustomed to reaching Facebook audiences.

"The publishers are obviously enhancing the value and integrity of Facebook through their news and content but are not being adequately rewarded for those services," Murdoch says in his statement released Monday. "Carriage payments would have a minor impact on Facebook's profits but a major impact on the prospects for publishers and journalists."

Last week, Facebook said it would survey readers to determine what news sources are trustworthy, and it would limit the presence of less credible sources. Facebook has also said it would lower the visibility of news, in general, in favor of more posts form friends and family.

The amount of news in people's feeds would likely drop by 20 percent on average, according to Facebook. Meanwhile, the news that remains would skew in favor of the publishers deemed more trustworthy as determined by Facebook's survey. Many established media players have said they are optimistic they will make the grade, and that particular upgrade to quality could benefit them.

Facebook is making the changes in response to the fallout from the 2016 election, when bad actors flooded the service with false news. At the same time, Facebook has been trying to encourage more positive interactions on the social network, with less vitriol and political toxicity.

"Facebook and Google have popularized scurrilous news sources through algorithms that are profitable for these platforms but inherently unreliable," Murdoch says. "Recognition of a problem is one step on the pathway to cure, but the remedial measures that both companies have so far proposed are inadequate, commercially, socially and journalistically."

On Monday, the 2018 Edelman Trust Barometer was released, an annual report that typically comes ahead of the global leadership meeting in Davos, Switzerland. The report highlighted problems facing Facebook and Google: Trust in platforms was down 2 percentage points with barely half of people saying they trust platforms as sources of news. Meanwhile, trust in journalism was on the rise, up 5 percentage points to 59 percent.

"Facebook is scrambling as the industry, Washington and the global community is losing trust in them," says Jason Kint, CEO of Digital Content Next, an industry group that advocates for publishers and is often critical of Facebook. "There is nothing worse to a company long-term."

On Monday a Facebook employee wrote a blog post about whether social media was good for democracy, touching on foreign meddling, false news, media bubbles and totalitarian surveillance.

"If there's one fundamental truth about social media's impact on democracy it's that it amplifies human intent—both good and bad," says Samidh Chakrabarti, product manager and civic engagement at Facebook, in his post. "At its best, it allows us to express ourselves and take action. At its worst, it allows people to spread misinformation and corrode democracy."

Many publishers had hoped for a future of close partnership with the social network, even if it meant giving Facebook a powerful role as intermediary.

"We're really getting tired of Facebook," says a digital publishing exec from a major media company. "They are constantly changing and iterating. And with the lack of monetization opportunities, it's gotten to the point where we have to wonder where this partner fits into our future."

Publishers worry about Facebook plans to lower the visibility of news on the social network and to rank media sites for credibility.